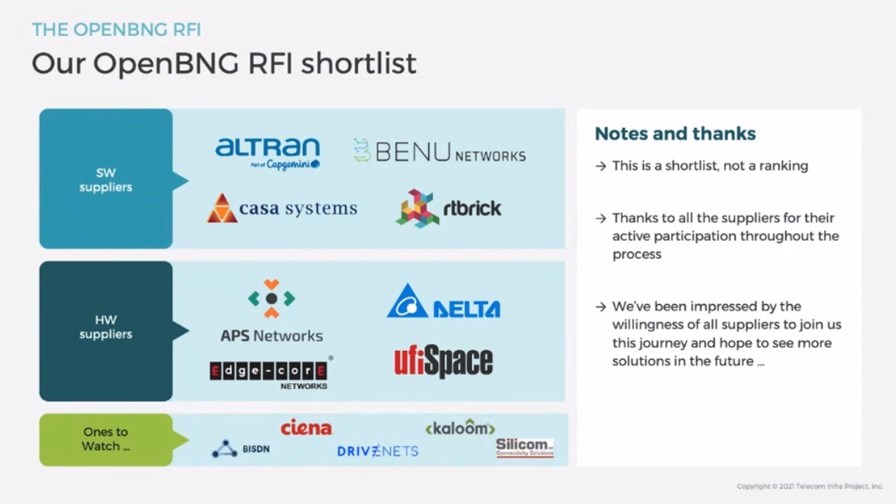 Eight vendors have been shortlisted for disaggregated broadband network gateway (BNG) telco trials by a group of top telcos that are running a programme at the Telecom Infra Project (TIP)’s latest entity, the Fixed Broadband Project Group.

The telcos – BT, Deutsche Telekom, Telecom Italia, Telefónica and Vodafone – have been working on the project for some time within the broader TIP framework, having issued an OpenBNG RFI (request for information) in July this year. Those operators feel there is a need for a new BNG – which provides subscriber authentication, authorization and accounting (AAA) and traffic management in wireline access networks – that enables a broader set of applications and functions to be deployed from a more diverse set of vendors than currently offer traditional, proprietary BNG systems.

Now, with the Fixed Broadband Project (FiBR) Group now officially formed, the telcos have used it to announce the identities of the companies that are being taken into various telco labs to try out multi-vendor combinations of hardware and software.

The hardware vendors that made the RFI cut are APS Networks, Delta, Edgecore Networks, and UfiSpace, while the software vendors are Benu Networks, Capgemini Engineering, Casa Systems, and RtBrick.

A number of vendors were named as “ones to watch” that didn’t quite tick all of the boxes – that list includes BISDN, Ciena, DriveNets, Kaloom and Silicom.

With the RFI process now completed, the operators will now work with the shortlisted companies to develop test and validation plans with a view to starting work in early 2022 in various operator labs: The operators will choose combinations of hardware and software depending on their specific requirements.

At the same time, the telcos will publish their detailed technical requirements to the FiBR group, allowing vendors to submit products that meet those specifications to the TIP Exchange, which lists TIP-compliant products on offer by the industry group’s members.

Naturally, the shortlisted vendors are bullish about the results.

“The OpenBNG initiative that TIP is running is a really important move for the broadband industry, not least because it is being driven by several Tier-1 Carriers that experience the challenges of running conventional infrastructure every day,” noted Hannes Gredler, founder and Chief Technology Officer at RtBrick, in an email to TelecomTV. “Our customers want to build a new generation of ‘cloud-native’ telco networks, with open programmable interfaces, and deliver services on disaggregated software and hardware, which is exactly what the TIP members have defined. This RFI process, including the testing and validation that will follow, should give many other operators the confidence that this technology is ready for prime-time deployment today.”

With the test and validation process underway, the operators are already looking ahead to where this OpenBNG process might take them, and according to Rosario Persico, IP technologies expert, Technology Innovation at TIM (Telecom Italia), the current work needs to set a trajectory towards the development of a unified, open core platform for fixed and mobile services and network.

Talking during a TIP webinar about the RFI, Persico noted that while it is still too early to start working on a similar process for the AGF (access gateway function), which currently provides a certain level of convergence between the mobile and fixed broadband access worlds by connecting directly to a 5G core platform for AAA and policy control functions in a fixed access network, she can see a time when the AGF would be disaggregated and the BNG and AGF functions would all become converged as part of a single core platform serving all types of services and end users.