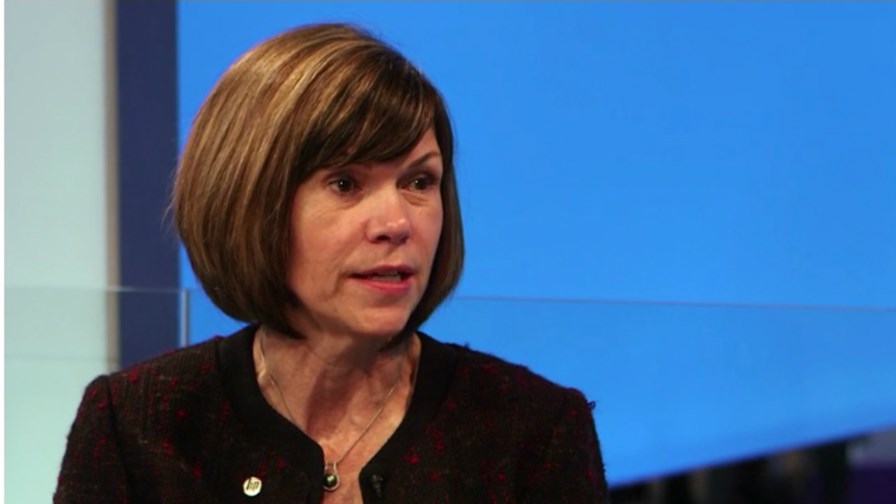 Bethany Mayer, until last month the face of and force behind HP's NFV initiative, has now taken over as CEO of Ixia, a Test and Measurement specialist that is evolving rapidly into a cloud-based company with an eye on making a big impact on the virtualisation market. In her first public appearance in her new role she told long-time telco managers to get with the new reality and embrace the cloud and virtualistion - or suffer the inevitable consequences.

One of the major barriers to the successful implementation of virtualised services in a traditional telecoms environment is cultural and organisational rather than technological. Big, stratified, bureaucratic telcos are by their very nature slow and lumbering beasts when compared to IT and OTT companies. Even today, after decades of exposure to competition, it still takes a long time for them to change, not because management and investors and the markets don't want them to but because they are riddled with entrenched redoubts of defensive self-interest determined to fight an often bloody-minded war of attrition against changes to the status quo.

In these many cases, adapting organisational psychology, culture and structure to new realities can be much harder to effect than the introduction of new technologies - and, as history shows, inbred reluctance or inability to change can sound the death knell of even the biggest and most famous of companies. The fact is that, unless properly managed and engaged, reactionary forces can and will slow the impetus for change to a glacial rate, or, in many cases, simply stop it in its tracks altogether.

Which brings us to Bethany Mayer and her new job. Until last month, Ms. Mayer was the senior vice president and general manager of network Functions Virtualisation (NFV) at HP. Seemingly a rising star, she suddenly resigned the company to become President, CEO and member of the Board of Directors of Ixia, a vendor of network test and measurement solutions with a somewhat troubled recent history.

Now, at first glance it seems that for Ms. Mayer, hitherto a middle-sized fish swimming along with a school of shiny contemporaries in the warm HP ocean, to have chosen to leap out of it to become the biggest fish in the industry equivalent of a garden pond seems counter-intuitive if not downright perverse but Bethany Mayer brings over 25 years of technology experience to her new company and intimate knowledge of NFV. That's why Ixia wanted her and that's why she took the job.

TelecomTV conducted the last interview Ms. Mayer gave before she left HP, and in it she spoke of her long-established commitment to open standards and of the ending of Phase 1 of NFV. She moves to her new role at an opportune and significant moment: the beginning of Phase 2 of NFV and an era of multiple Proof of Concepts (POCs) which are the necessary precursor to large-scale trialling of the technology prior to commercial roll-out of NFV-based services.

Ixia is a medium-sized, (1400 employees and falling) publicly-traded company headquartered in Calabasas, California, a couple of hundred miles and more south of Silicon Valley. It provides software and hardware test systems and service verification and validation platforms for for both wireless and wireline infrastructures and services as well as test equipment and services used to verify that converged IP networks are secure and operate reliably under load and pressure.

Amongst Ixia's key customers are manufacturers such as Alcatel-Lucent and Cisco, telcos and service providers such as Deutsche Telekom and NTT as well as government agencies and enterprises.

Interestingly, given its T&M antecedents, Ixia recently published a free ebook entitled, "Demystifying NFV in Carrier Networks: A Definitive Guide to Successful Migrations." The publisher's blurb says the ebook "helps companies fast-track NFV planning and deployment." Which is exactly what Bethany Mayer was doing at HP and no doubt what she will also be concentrating on at Ixia.

All together now, let's sing along; "Oh, the vendors and the telcos should be friends"

Speaking yesterday (and for the first time in public as CEO of her new company) at Light Reading's "Women in Telecom" breakfast meeting in Santa Clara, Bethany Mayer took the opportunity to tell those who have been working in telecoms for some time to lift their heads above the parapet and take a good long look at the new landscape beyond the trench walls.

She said, "If you've been in telecom for a very long time, think about the skill sets of those in the cloud environment. Cloud and telecom infrastructure are merging."

Her message is that NFV, SDN and the cloud are inextricably intertwined and the old certainties have gone, virtualisation is changing the global industry and those of a traditional telco environment had better realise that and get with the new reality… or else.

And that's not easy. Along with the need for a change of mindset comes the imperative to change business models and to develop, deploy and, very importantly, monetise new virtual services to get a return on expensive investments.

Thus, says Ms. Mayer, vendors have to ensure that a virtualised telco environment will work just as well as as a physical one - but better and at reduced operating cost - and that requires a cultural change on the vendors part as well.

It is a challenge already accepted and taken up by the likes of Intel, Cisco, Juniper and others who are orchestrating their evolution from "box-shifting" vendors to strategic partners collaborating with their clients to fulfil customer demand. It is no longer a case of "Here's another gizmo in a  box, take it or leave it." Now it is "How can we work together to meet your technology needs whilst ensuring you get a good ROI."

However, the fact remains that too many in senior positions at traditional established operators remain suspicious and wary of the IT arena. That is a perception and prejudice that must change and that has to change.

Whether Bethany Mayer can turn Ixia into an NFV powerhouse remains to be seen but she has an impressive history, she knows what she's talking about and is very determined. One measure of success will be if she manages to put the wind up some of the established NFV players and turns Ixia into a genuinely disruptive force in an extremely important nascent market. If the company makes and acquisition or two along the way (or forces a competitor to the wall), so much the better. On the other hand if she builds Ixia to the point where it becomes an acquisition target she will also be judged to have made a success of things - and richer to boot.