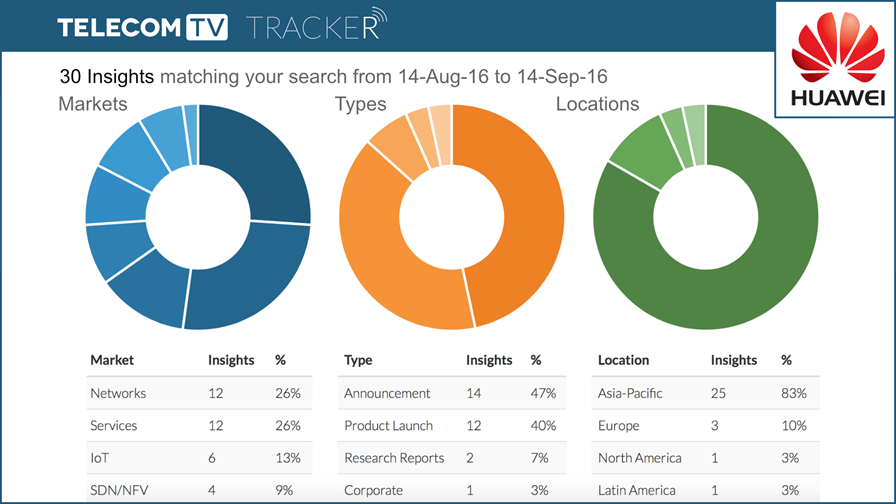 You’ve got to hand it to Huawei, they sure do keep their PR team busy with news announcements. For those of you who have signed up for our Tracker service (and if you haven’t why not? The basic service is free…), you will have noted that Huawei has made 30 announcements in the past month alone. These are genuine news announcements, as we filter out irrelevant ones. Of the 30, 26 per cent have been network-related, 26 per cent services related and 10 per cent SDN/NFV. Viewed by type, 40 per cent have been product launches.

Compare that output with other vendors. Nokia manged 20 news releases, while Ericsson managed 14. Quality to one side, Huawei is certainly pumping out the quantity.

All of which brings us nicely to (one of) today’s announcements from Huawei. The Chinese vendors has launched its uX2 solution to help operators provide improved cell edge user experience and release network potentials. It’s a timely announcement, coming just a week before the annual Mobile Edge Computing (MEC) event in Munich, which, incidentally, TelecomTV will be attending to conduct interviews and video features.

Huawei has apparently been testing its solution for some time, with pilot deployment in live networks in Hong Kong, Lithuania, and the UAE, plus “large-scale commercial use” in Thailand – fast work, or a loose definition of “recently released”.

Nevertheless, Huawei has been open about performance gains. It says that commercial data for networks in Thailand demonstrates a 15 per cent increase in uplink cell edge throughput, which will be reinforced with future growth in cell traffic. In addition, pilot deployment in Lithuania showed that the cell edge uplink rate increased by 70 per cent in drive tests and in Hong Kong the downlink cell edge throughput improved by more than 50 per cent.

Huawei said it introduced its patented uX2 interface in its “UMTS+” solution to allow for fast information exchange among NodeB network elements and to eliminate the need for the radio network controller to forward information. It is based on the X2 interface between NodeBs that was designed to minimise packet loss on HSPA and LTE networks.