For mobile, the only way is up, as Ericsson plots a course for 2020 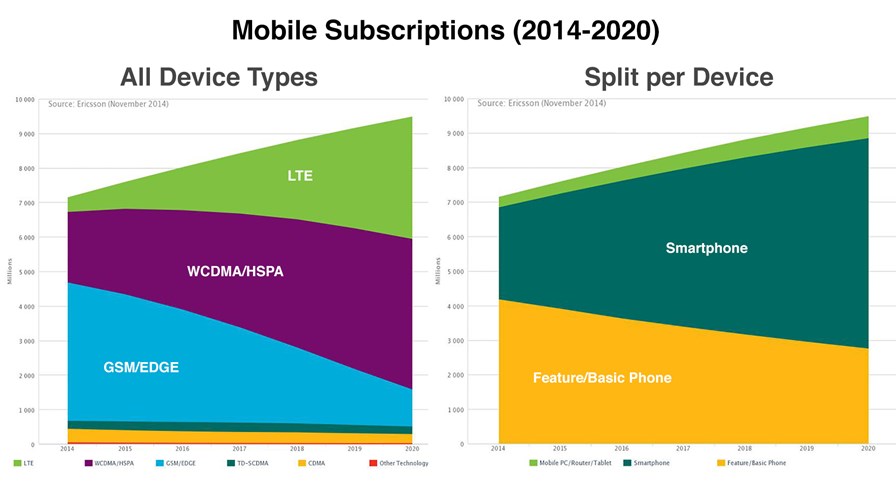 Ericsson has published the latest edition of its statistic-packed Mobility Report, a comprehensive update on mobile trends based on big data analytics from live networks worldwide. It’s well worth downloading the 32-page report, and using its new chart generator tool to customise some of the data.

Basic numbers first: as of the end of 2014, Ericsson is forecasting 7.1bn mobile subscriptions worldwide, of which 2.7bn will be smartphones. 2G subscriptions dominate, accounting for 4bn (they include EDGE in this category), with 3G accounting for 2bn and LTE just 400m. However, as of 2020, we’ll see evidence of the technology switch over – of the 9.5bn subscriptions forecast by then (6.1bn being smartphones), only 1.1bn will be 2G-only, with 3G taking the leading position with 4.4bn and LTE not far behind with 3.5bn.

Of course, 2020 is the year when we should see commercial 5G networks appearing, but it will be several years before they challenge 3G and 4G in terms of device subscriptions. However, the market will still be buoyant by then and hopefully ready and willing for 5G’s extended capacity and data performance. Ericsson says that by 2020, 90 per cent of the world's population over 6 years old will have a mobile phone.

“The falling cost of handsets, coupled with improved usability and increasing network coverage, are factors that are making mobile technology a global phenomenon that will soon be available to the vast majority of the world's population, regardless of age or location,” said Rima Qureshi, SVP and Chief Strategy Officer at Ericsson.

In terms of regions, India and China are currently showing the fastest growth for new mobile subscriptions (to nobody’s surprise) with 18m and 12m net additions in Q3 this year respectively. By 2020, China is estimated to account for over 1.2bn LTE subscriptions, adding 450m new subscriptions over the next six years. India won’t do so well with LTE, mainly because of lack of spectrum and the slow roll out of 3G, with just 45 per cent of the population expected to be covered by LTE networks by 2020.

And in terms of traffic and usage, video continues to dominate (again, to nobody’s surprise). In 4G-dominated networks, it currently constitutes 45 per cent of mobile traffic, driven largely by increased usage of video streaming and improvements in the overall mobile video experience. By 2020, Ericsson says mobile video traffic will increase tenfold, increasing its share slightly to around 55 per cent of the total mobile data traffic.

M2M will also play an increasingly important part in the mobile landscape over the next five years. From 230m cellular M2M subscriptions today, Ericsson believes this will rise to 800m by 2020. Whilst that’s a mere drop in the ocean when compared to total mobile broadband subscription (2.9bn now, 8.4bn in 2020), it is more than the projected 650m subscriptions from mobile PCs, tablets and routers.

Whilst 80 per cent of M2M devices today are 2G-only (due to cost, low data demands, and long product lifecycles), within the next four years 3G and 4G devices should account for more than half of all these devices. However, M2M’s share of total cellular traffic is incredibly low, at just 0.1 per cent in terms of bytes.

Finally, back to 5G. Ericsson believes the technology is predicted to have a faster uptake than 4G LTE, just as 4G had a faster uptake than 3G. This is due to the fact that, in addition to new radio technologies, 5G will also encompass evolved versions of existing radio access, cloud, and core technologies, and it will also be driven to a large extent by new use cases, especially in M2M.