Microsoft jumps straight to 10 for its new universal operating system 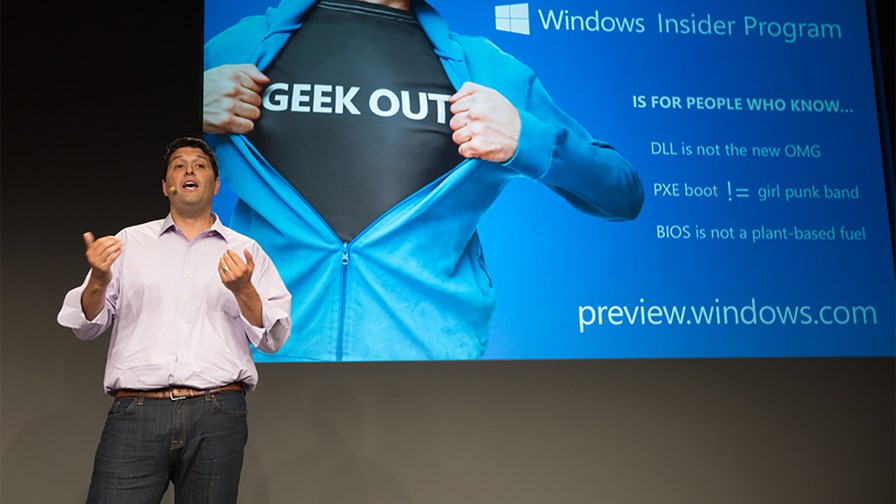 There’s no denying Microsoft’s determination to regain the lost ground of its previous era and be a key player in what it calls the mobile-first, cloud-first ICT world. Despite pressure to give up on its mobile OS business and hand the game to Apple and Google, it pushed ahead with a vastly improved Windows Phone OS and even brought Nokia into the corporate fold. It then announced ambitious plans for the emerging Internet of Things sector. Don’t tell CEO Satya Nadella.

Yesterday the company unveiled its next operating system; the successor to Windows 8. In a nice surprise twist, it wrong-footed analysts by calling it Windows 10, as apparently calling it 9 wouldn’t do justice to the scale of changes and improvements Microsoft has planned. It also echoes back to Apple’s renaissance when it launched OS X and utterly changed its software approach. Microsoft intends the new OS to work across the full portfolio of its products, from the IoT to smartphones, and games consoles to enterprise servers.

Windows 10 is being built from the ground up around the idea of a single application platform for developers. Not a single UI though – each device category will have its own user interface that is tailored to the product – but one product family, running apps served from a single app store.

“The tension between the desire for agility versus stability poses a huge challenge for IT Pros,” said Terry Myerson, EVP of the Operating Systems group at Microsoft. “Experiences – no matter what device you’re on – just need to work. The only thing that hasn’t really changed is the situation for developers – still too much to do, and not enough time.”

Hence the idea of universal apps to target as many Windows device categories as the developer wishes, using one consistent API layer

Yesterday’s announcement focused on enterprise customers, as Myerson says these customers need to evaluate new software early on. A Technical Preview of Windows 10 will be available for enterprise users later today, in the hope that real-world experimentation will help refine the OS. The focus will shift to consumers in early 2015, with a commercial launch planned for later in the year.

Myerson notes that in the first half of this year, shipments of enterprise PCs grew 14 per cent, and shipments of Windows enterprise tablets grew 33 per cent, further vindicating his approach of courting enterprise users early. Whilst Windows is also the dominant OS for PCs, with some 1.5bn installations worldwide, only 20 per cent of organisations have migrated to Windows 8, according to research firm Forrester.

Windows 10 will also introduce a number of advancements in security and identity protection, such as the creation of ‘user identities’ to eliminate the need for extra security hardware peripherals. Windows 10 also uses containers and data separation at the application and file level – enabling protection that follows the data wherever it goes.

“Users won’t need to change behaviour, use special apps, or move to a separate, locked-down environment to keep corporate data secure,” said Jim Alkove, leader of the Windows enterprise programme management team. “With the increasingly more mobile workforce, secure access to network resources is an important priority for every organisation.”

Windows 10 also offers better operation between touch devices and mouse and keyboard devices, using a feature Microsoft calls Continuum. This will switch modes depending on how the OS is being used – useful for the increasing number of hybrid tablet/laptop devices that are being released (perhaps we need a new term for these; as my colleague Ian Scales was jointly responsible for coming up with Phablet, perhaps we could coin Laplet? Or maybe not…)

However, Microsoft has a long way to go before it can compete in the mobile area with Apple and Google. A seamless transition from desktops to smartphones will help with the business market, coupled with universal apps, tighter security and all the other improvements we are promised. But it probably won’t help much with the consumer sector. To tackle that, Microsoft just needs to keep improving on its Windows Phone 8.1 OS, keep releasing superb quality Lumia devices, and keep pushing the message.

Disclaimer time: Hands up, I was one of those who thought Microsoft would never become a strong third-placed competitor in this sector – it still isn’t, and is a long way from achieving this in terms of market share, but at least it now has an extremely capable offering. So much so that I’ve just abandoned my long-term iPhone love affair and went out and bought a Lumia 930 this week. I’ve been buying, using, testing and occasionally throwing away mobiles for over twenty years, and have a filing cabinet full of old models. Not since the first iPhone have I been so taken by a hardware/software combination as the Lumia 930 (and yes, it’s my own phone, bought for with cash, not a PR freebie). But whilst I’m convinced it’s worth having as the centre of my connected world, the majority of people aren’t. And that remains a problem for Microsoft.

Hopefully Windows 10 and the new more inclusive approach taken by Nadella will pay off.