US mega-mergers will make online content a harder telco play

There appears to be a looming crisis in the fast changing, but also fast-consolidating, world of video content. It’s heading towards ‘near monopoly’. And that inevitably means, as we know from our mobile market history, that prices will go up, innovation will go down and everything will start to fossilize as companies see more profit in lobbying governments and deploying lawyers to keep things as they are rather than going toe-to-toe in the marketplace.

And, more to the point, it may also mean that telcos casting around for new revenue streams and wanting to break into ‘content’ via  networked video, distribution and even content creation, may find online content an even harder nut to crack.

Here are some scary facts from Ampere Analysis. It points out that as the dust settles from  the mega-mergers of Comcast/Sky, and Disney/ Fox it will reveal that two out of every 10 dollars spent on content worldwide will now be spent by the two merged behemoths. That’s just the global share. In the US things will look even worse with those companies spending four dollars out of every ten.

Put another way the combined spend of the two big players will reach US$43 billion by the end of 2018 - about $22 billion by Disney/Fox and $21 billion by Comcast/Sky. That is more than the combined content outlay by the next 10 US content spenders, including Netflix and Amazon.

According Ampere Analysis the industry consolidation is to some extent “a reaction to the growing power of online video platforms. Companies such as Netflix and Amazon continue to invest significantly in content, a trend which shows no signs of abating. (see - The slow motion revolution. Perspectives). We expect Netflix to spend over US$8bn on a P&L basis by the end of 2018, and the streaming giant has repeatedly stated it will continue to boost its content budget. Prior to the recent mergers, Netflix was on course to catch - and overtake - the top Hollywood studios by content spend. However, in light of the two new combined entities, Netflix would now need to triple spend to achieve this this feat.”

As Mary Lennighan pointed out last week (see - AT&T going global with video service) there are other challenges to the status quo apart from Netflix and Amazon. “AT&T is working hard on a strategy to transform itself into a full digital services provider, developing its TV and video service offerings with a view to targeting all segments of the global market, from full DirecTV bundles to the thin client OTT offering.” 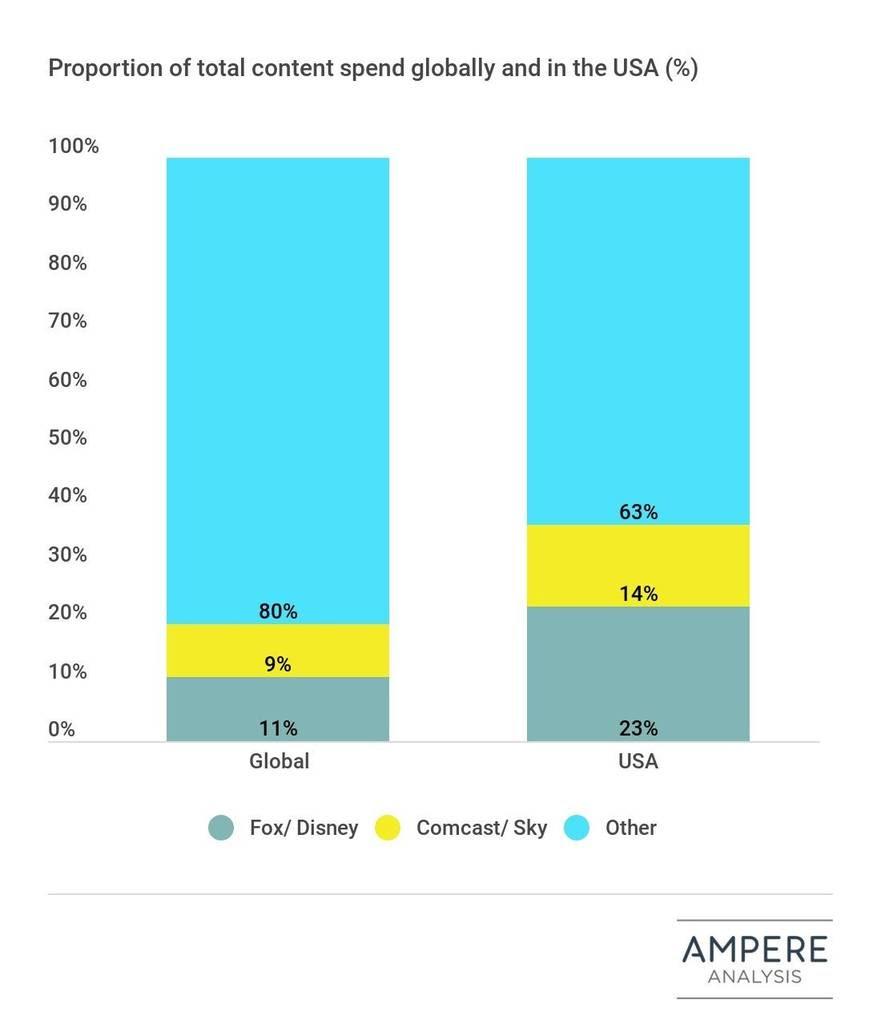 But the reason content market consolidation will make it harder for relative newcomers to  break in, is that it grants the content owner the power position. In other words, content monopoly can pretty much take over from access network monopoly as the best way to squeeze more money out of consumers.  With OTT distribution, content owners can simply bypass would-be gatekeepers and go straight to consumers (or threaten to).

The telco industry has some important cards though. Despite moaning about falling revenues, it collectively has more financial muscle. In comparison, the US content industry’s $43 billion annual spend is tiny - the US mobile industry alone spends $190 billion per year on network gear (in many ways the equivalent to the annual content spend). So it’s not a question of financial power, rather a question of historical content ownership -  all those content franchises and Disney box sets are very difficult to compete with.

According to Ampere Analysis, Comcast/Sky and Disney/ Fox consolidating and then “wielding their  financial authority, not only strengthens both entities’ positions in the global market, it protects against the rising strength of online video. Both have increasingly vast libraries of original content ready to be exploited through direct-to-consumer offers. Disney has already indicated it will stop licencing content to Netflix in favour of its own direct to consumer offer, a service which will have even greater appeal with the addition of Fox assets.”