FRAMINGHAM, Mass., December 20, 2017 – The overall wearables market is expected to grow from 113.2 million shipments in 2017 to 222.3 million in 2021 with a compound annual growth rate (CAGR) of 18.4%, according to the International Data Corporation (IDC) Worldwide Quarterly Wearable Device Tracker. The most popular wearables to date have been basic wristbands like the Xiaomi Mi Band or Fitbit Charge. However, such wearables are quickly becoming commodities and IDC anticipates low single-digit growth in this category throughout the forecast period. Meanwhile, watches (both smart and basic) are on track to take the lead and are expected to grow from 61.5 million in 2017 to 149.5 million in 2021 as more vendors – particularly fashion brands—and cellular connectivity built into smartwatches help to drive growth in this category.

"The move from wristbands to watches introduces additional revenue opportunities for vendors and distributors as average selling prices are expected to rise," said Jitesh Ubrani senior research analyst for IDC Mobile Device Trackers. "However, the struggle to move beyond health and fitness persists and convincing consumers to spend more for utility that may not be immediately obvious will be a challenge. This is where fashion-forward brands have a chance to shine as their customer base doesn't tend to prioritize features."

"What will merit continued observation is how the market evolves beyond its current status and how users will either replace or append to their current devices," said Ramon T. Llamas, research manager for IDC's Wearables team. "Tomorrow's wearables will become more fully featured and multi-functional, spanning health and fitness to communication and productivity. Effectively, that will make today's wearables seem quaint, and spur upgrades and replacements.

"What's more, users can expect a wider array of devices going forward," added Llamas. "These won't necessarily replace the wearables we have today, but other products that we use on a regular basis. Traditional earphones will give way to smart earwear that feature fitness tracking, audio augmentation, or personal assistants. Clothing – the original wearable – will become smarter with health and fitness tracking, particularly for professional athletes."

The simplicity and low cost of Basic Wristbands (fitness bands) make them highly accessible, particularly in emerging markets around the world. Although they will account for the majority of device shipments in 2017 (39.8%), this category is expected to decline in share to 21.5% by 2021 as watches gain traction.

In many ways, Basic Watches (Hybrid Watches) are the evolution of fitness bands but they include significantly better design and fashion appeal. The entry of additional fashion brands along with their unique customer base and distribution network will help to drive growth although consumer education around their utility will continue to be a challenge.

Smart Watches , led primarily by the Apple Watch, are expected to ship 71.5 million units by 2021, up from 31.6 million in 2017. Contributing factors include the adoption of cellular connectivity, additional SKUs from fashion brands, and the transition of kids watches (a phenomenon largely relegated to China) from basic location tracking watches to more sophisticated watches that allow kids to play games, run apps, and communicate with friends/family.

The emerging category of sensor-laden Clothing , led mainly by step-counting shoes, will be a distant fourth as many of the features will be copies of wristbands and watches. Though newer products like the Levi's Commuter Jacket (made in partnership with Google) show promise, their high price points and limited use cases make them a tough sell for the broader market.

Following closely behind Clothing, Earwear wearables are expected to ship 10.6 million units by the end of 2021 with a 58.5% CAGR from 2017–2021. It's important to note that this category excludes traditional Bluetooth headsets. Instead, it is comprised of wireless headphones that offer additional features such as fitness tracking or audio augmentation. The elimination of the 3.5mm headphone jack from smartphones will certainly be a catalyst for this category. However, new entrants like Bragi and Nuheara, combined with established headphone brands like Bose and Jabra, are expected to drive growth in the coming years.

Others: This category includes wearables that can be worn on multiple parts of the body, the small category of smart wristbands (those that do run third party apps), as well as other wearables that do not fall into the categories mentioned above (e.g. Snap Spectacles). Such wearables will experience very minor growth, growing from 2.7 million shipments in 2017 to 3 million by 2021, and will continue to lose share over the course of the forecast. 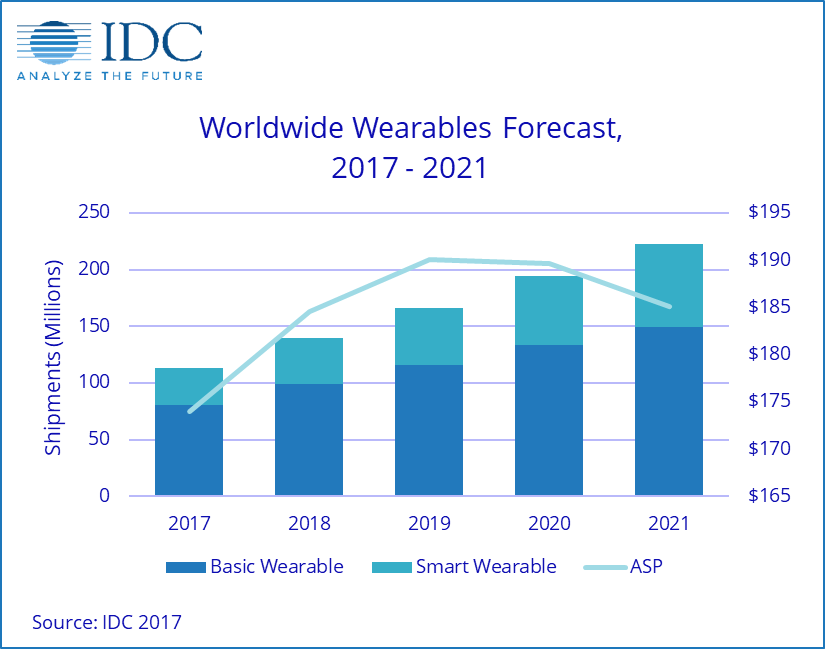