Huawei showcases the power of its high-speed massive MIMO technology 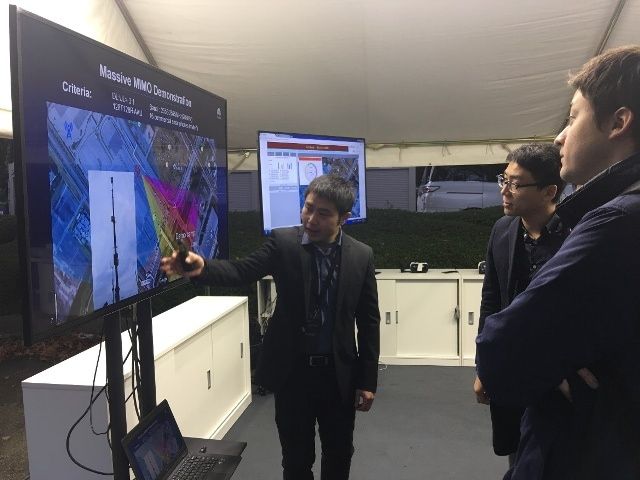 Massive MIMO is a mobile communication technology which enables reliable communication in crowded places like railway stations and shopping centers, where communication speeds tend to slow. It uses a large number of antennas and beamforming to allocate a private width of radio waves to each user to improve their user experience. During the field demonstration conducted at MBBF using 20MHz in the 2.5GHz band on the TDD (AXGP) commercial network operated by Wireless City Planning Inc, SoftBank’s group company, Huawei achieved maximum cell throughput of 620Mbps.

More than 1,500 global visitors actively participated in the MBBF activities, with a number of them experiencing the field demonstration through virtual reality glasses, which showed HD live broadcasting of exhibitions happening indoors via Massive MIMO commercial services. In that case, the average cell throughput of the Massive MIMO site is still achieved at 400Mbps, 10 times faster than LTE under busy network conditions. The results of this field demonstration showing higher base station capacity and spectrum efficiency will accelerate global commercialization of Massive MIMO.

Huawei also demonstrated Japan’s first smart parking service using NB-IoT at MBBF. Equipped with sensors and vehicle detectors compatible with NB-IoT, the service enables end-users to see the parking status in real-time and search for a parking space, reserve it, and pay the fee via smartphone applications. These applications are expected to reduce the time spent on parking and help to lessen customer complaints, thus bringing advantages not only to car parking service providers but also to local society as a whole.

Together with operators across the world, Huawei will accelerate its open collaboration and joint innovation with its partners in order to advance mobile technologies with an eye on local market needs, while it will help operators provide ubiquitous and quality mobile connection services to its users.