[Lisbon, Portugal, November 16, 2016] The first electrical energy smart meter, using 4.5G NB-IoT communication technology, has been successfully tested. This pioneering project, will be demoed by the end of this year at the Parque das Nações, in Lisbon, as part of the Horizon 2020 UPGRID project. The official presentation of the smart meter will be made at European Utility Week, between the 15th and the 17th of November in Barcelona.

Huawei and Janz CE have designed and manufactured the new meter, using modules from u-blox, and EDP Distribuição and NOS. To this end, NOS deployed the entire 4.5G NB-loT network based on Huawei infrastructure that supports the project, making it the first operator in Portugal and one of the first in the world to use the standardised version of this technology. 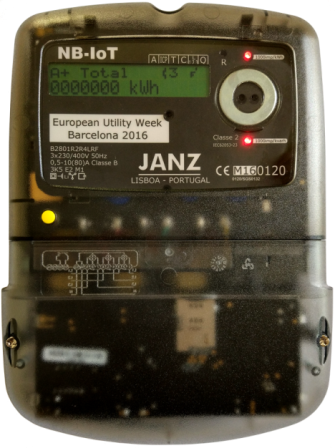 NB-IoT has emerged as the Low Power Wide Area (LPWA) wireless access technology, standardised by the 3GPP, which offers a wide range of advantages, among which are the support of more than 100,000 connections per cell, a battery life of up to 10 years and a gain of 20dB over conventional GSM networks. Additionally, NB-IoT provides reliable and secure connectivity by the use of licensed spectrum and 4G ciphering.

NB-IoT technology thus has the potential to improve the automation of processes, reduce costs, increase security and provide a better service to final consumers by introducing innovative services that add value.

The Parque das Nações area in Lisbon was chosen by EDP Distribuição to pilot the project among 100 customers, beginning this year and continuing until the end of 2017. This area of the city is already served by two NOS base stations which provide 3GPP standardised NB-IoT coverage. Intelligent energy management in the homes of these customers, will also play an active role in helping to improve their energy cost efficiency, and is just the first example of the use of this technology.

Representatives from the five companies involved in the project have highlighted their satisfaction after successfully reaching this major milestone, which involved a multi-disciplinary team of people with expertise in various areas, over the course of this phase of the project.

“Huawei, as an industry innovation leader, is a key contributor to the NB-IoT standards, sharing a strong belief that this technology will be the driver for a faster IoT mass adoption due to its unique advantages. Huawei is also contributing for a quicker E2E ecosystem, by deploying several labs around the world to integrate NB-IoT technology in a variety of devices. Huawei is proud to participate in the first successful NB-IoT Electricity Smart Meter demo with NOS, EDP, u-blox and JANZ CE, aiming at continuing to enhance the cooperation with local players for a mature NB-IoT ecosystem,” said Chris Lu, Huawei Portugal Country Director.

“We are really pleased to have achieved with Huawei the development of the first electrical energy smart meter in the world using NB-loT technology and demo it with EDP Distribuição and NOS. This solution is going to create value for utilities, such as electricity outage, by last gasp functionality. Our technological partnership is based on a mutual strategic and technical confidence that overcomes complexity, leverages intra-capabilities and shortens the time-to-value of smart metering applications.

"u-blox has been an early pioneer developing technical expertise and thought leadership in NB-IoT. Along with our partners, we are driving innovation in NB-IoT technology to serve the industry as a whole, and are fully supportive of technology based on global standards," said Andreas Thiel, Co-Founder and Executive VP, Cellular Products and IC Design.

“We are continuously looking, with supportive partners, for the solutions that can best serve our clients and this is another relevant step in our innovation path that is transforming the grid and improving our activity as facilitators of the electricity market.”

“We are really proud of NOS’ involvement in this innovative project, which will make a real difference in making electricity consumption more efficient in Portuguese homes in the near future. Working with long term partners, such as Huawei, and with new companies with a vision of the future, is always a guarantee of success and will strengthen the competitive position of NOS.”