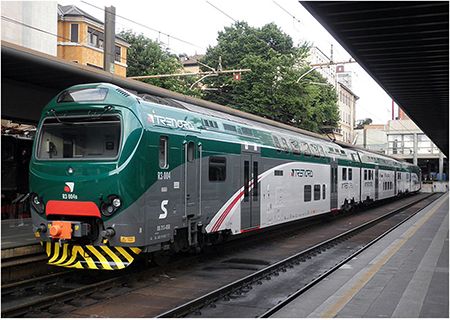 Double-decker coaches to be delivered

FNM has exercised an option in the contract signed by its subsidiary in 2006. Under the new contract, HRI will supply FNM with additional 4 trains with 4 cars each, totalling 16 cars, which will be delivered to the customer between July 2017 and November 2017 with operation due to commence soon after delivery. The cars will operate on several lines around Milan. Following the delivery of these optional units, HRI will have provided a total of 141 cars, consisting of 60 leading cars and 81 intermediate cars to FNM Group.

The TSR is a double-deck train, first designed in 2004, with distributed power characterized by motorized cars, allowing flexibility in the formation and high performance in operation. It features strong acceleration capabilities providing a powerful start at the departure, with each coach motorized with one motor bogie. The latest model features improved passenger comfort and installed internal closed circuit video cameras act as a deterrent against vandalism and for the control by the on board crew.

The 4 car configuration carries more than 400 seated people and400 standing passengers. The length of each car is 26 meters and the maximum speed is 140 km/h. The car body is constructed from aluminum alloy.

The cars can be coupled to make trains with 3, 4, 5 or 6 car configurations maintaining the same acceleration capability with the power distributed over each car. The trains can be coupled together reaching a total of 12 cars. There are 96 seats on the leading cars and 122 seats on the intermediate cars. Depending upon the configuration, the TSR transportation capacity can vary form 314 seats for a single 3 car train to 1360 seats for two 6 car trains coupled.

The vehicles will be assembled in the Pistoia Plant. The power components such as motors, converters and the train control and monitoring system will be manufactured in the Naples Plant.

Ferrovie Nord Milano was created in 1877 to build and operate the railway lines in the Lombardy region. The railway network was developed in the North-West of Lombardy to connect the city of Milan with the towns of Novara, Varese, Laveno, Como and Erba-Asso, by expanding the existing lines and acquiring additional lines.

Hitachi Rail Italy is specialized in the manufacture of technologically advanced rolling stock. Created by the evolution of AnsaldoBreda, the most important Italian brand with more than 160 years of history in the rail and metro sector, Hitachi Rail Italy has a wide range of products, ranging from high speed to driverless metros.