Tokyo, October 14, 2015 --- Hitachi, Ltd. (TSE: 6501), Hitachi Automotive Systems, Ltd., and Clarion Co., Ltd. today announced that they have developed the basic technology for preventing collisions while maintaining safe and practical speeds by predicting changes in pedestrian movements and rapidly calculating optimum speed patterns in real time. The companies have verified the validity of the technology using experimental vehicles and determined that it can be implemented at safe and practical driving speeds. Going forward, the Hitachi Group will accelerate to further develop the technology through repeated trials and contribute to the commercialization of autonomous driving technology.

Compared to expressways, the issues that need to be addressed to implement autonomous driving on local roads are more complicated, wherein there is a need to recognize various kinds of obstacles and moving objects such as passing vehicles and pedestrians and predict and determine their movements in order to carry out safe driving operations that are in accordance with the flow of surroundings. Autonomous driving that includes an advanced level of recognition, decision, and operation similar to those performed by humans requires the prediction of changes in their movements, real-time implementation of a driving plan to prevent collisions based on the predicted movements, and driving at safe and practical speeds as well as recognition of moving objects and obstacles.

The Hitachi Group developed the basic technology to address these problems and verified its validity using experimental vehicles. The following are the key features of the technology.

1. Speed control based on prediction of change in movement

Focusing on the potential field method* , which is used in path planning for robots, the Hitachi Group developed basic technology for preventing collisions with autonomous vehicles by predicting future movements of moving objects based on the positional relationships of moving objects with obstacles. In particular, they modeled the change in movement involved in changing paths towards a space with low risk potential when pedestrians try to avoid parked vehicles and other obstacles. The technology enables smoothly reducing speed at the best speed pattern which minimizes changes in acceleration when collision of pedestrian and vehicle is predicted, and maintaining a practical speed without decelerating when it is predicted that safety can be maintained.

In situations where there are multiple moving objects and obstacles surrounding the autonomous vehicle, it is important to consider both maintenance of safety and practicality of speed and to carry out real-time planning of the optimum speed pattern that will reduce the probability of collision and maintain comfortable speed and acceleration. Thus, it is essential to carry out rapid calculations to search for the optimum speed values. Conventionally, since calculations to search for optimum values involve a high computational load, it was difficult to carry them out within a short period of time. It was therefore necessary to increase the speed of access to the memory storing the collision probability map and reduce the number of calculations to search for the optimum values. The new technology calculates the probability of collision with obstacles after planning the path of the autonomous vehicle. Also, unlike conventional methods wherein collision probability based on direction of movement and road width is expressed on a 2D map, the path plan for the autonomous vehicle is fixed in advance, and a 1D map that omits road-width information is used instead, enabling high-speed access to memory. Further, by combining multiple parallel processes for calculating optimum values, the new technology made it possible to significantly increase the speed of calculations. This effect was validated using a Field Programmable Gate Array (FPGA) test board, wherein it was verified that speed of calculation can be increased to approximately 200 times faster than software processing using generic embedded processors. This makes it possible to plan optimum speed patterns in real time.

Tests using experimental vehicles were conducted to verify the validity of the new technology. Results showed that it was possible to achieve practical speeds for passing through pedestrians and driving within the standard comfortable speeds for acceleration (2.2 m/s2 or less) and for change of acceleration (2.0 m/s3 or less). 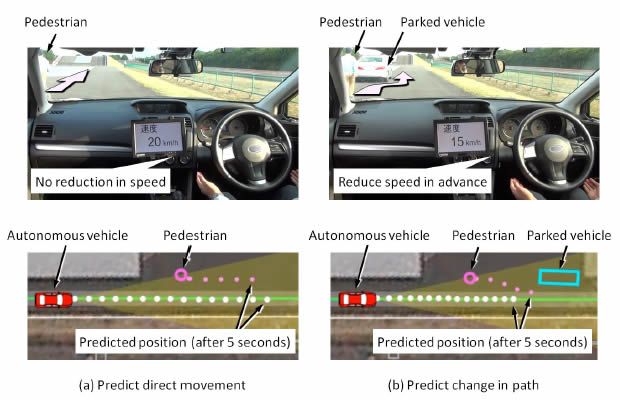 Going forward, the Hitachi Group will conduct further tests using experimental vehicles in different driving environments, including Mcity opened at the University of Michigan in July 2015 as a controlled environment for conducing tests on autonomous vehicles and connected cars.

The new technology was developed in part with the cooperation of the Pongsathorn Laboratory of the Department of Mechanical Systems Engineering, Faculty of Engineering, Tokyo University of Agriculture and Technology.

Part of the results of the research will be presented as a technical presentation at the 2015 JSAE (Society of Automotive Engineers of Japan) Annual Congress (Autumn) to be held at the Kitakyushu International Conference Center from October 14 to 16. *Potential field method: A path planning method that determines movement of moving objects from the trajectory of the potential field formed as a result of the object's attraction to its goal and repulsion from obstacles.