Hanoi set as a showcase to introduce Japan's latest agricultural methods using "Akisai," the Food and Agriculture Cloud, as the first stage in collaboration

Fujitsu Limited and FPT Corporation today announced that, as part of their smart agriculture project collaboration announced in October 2014, they have established the Fujitsu - FPT Akisai Farm and Vegetable Factory to spotlight the FUJITSU Intelligent Society Solution "Akisai" Food and Agriculture Cloud, in Hanoi, capital of the Socialist Republic of Vietnam. FPT will coordinate with Fujitsu in putting smart agriculture in practice and transfer this technology to Vietnam.

By leveraging the expertise in the agriculture field that the Fujitsu Group has refined, beginning with the co-creation of new business models with companies and organizations, such as agricultural producers, distributors, food processors, local governments, academic institutions, and agricultural-machinery and materials suppliers, from industries and categories beyond agriculture as Fujitsu has done in Japan, Fujitsu will implement two production facilities in Vietnam that employ cutting-edge technology: greenhouse cultivation and vegetable factory cultivation. These facilities will implement and introduce trial cultivation for high-value-added vegetables including medium-sized tomatoes and low-potassium leaf lettuce. Fujitsu and FPT will officially open the showcase on February 24, 2016, after starting Akisai and trial cultivation today.

In Vietnam, there are calls to develop agricultural businesses to ensure food safety by promoting innovation in agricultural production technologies and in recognition of the issue of pesticide overuse.

Fujitsu and FPT will use this showcase as a location to promote local smart agriculture co-creation activities, involving the Vietnamese government and companies from a variety of industries, and to contribute to the further development of Vietnam's agricultural sector. Figure 1. Exterior view of the showcase 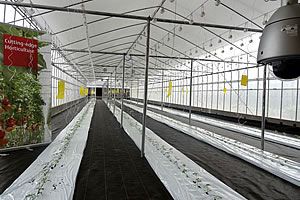 Utilizing Akisai's Greenhouse Horticulture SaaS service for producers engaged in greenhouse horticulture, environmental information (temperature, humidity, CO2, sunlight, rain, and wind direction and speed) is gathered in real time by a variety of sensors installed in the greenhouse, and this information is used to autonomously control the facilities, such as curtains and fans. By combining this facility with Imec® Film Farming(1) , also being implemented in Japan, this facility will cultivate medium-sized tomatoes that have high nutritional value and a high sugar content.

This facility introduces the completely closed plant factory that has already been implemented by the Fujitsu Group in the Aizu-Wakamatsu Akisai Plant Factory. The vegetable factory uses environmental data (temperature, humidity, CO2, nutrient liquid temperature, and electrical conductivity in the factory) collected from a variety of sensors in the factory, and will show how low-potassium leaf lettuce is grown.

2. Developing a Place for Japanese and Vietnamese Agriculture to Co-Create

Through the construction and operation of this showcase, the two companies are not only introducing Akisai and cultivation method experience to the field, but through efforts such as environmental control, human resource development, and agricultural-material procurement, are also studying the state of localization adapted to Vietnam's agricultural environment. In addition, by involving the Vietnamese government and companies from a variety of industries using this showcase, they are jointly considering the direction of smart agriculture in Vietnam.

Summary of the Fujitsu - FPT Akisai Farm and Vegetable Factory

A method of film farming where plants are grown on a thin film, using a hydrogel membrane developed by Mebiol, Inc. Because the film allows only water and nutrients to pass, and keeps out viruses and microbes, it can grow safe crops. In addition, because plants receive optimal water stress by absorbing nutrients through the hydrogel membrane, they create a higher volume of sugars and amino acids, creating crops with high sugar content and high nutritional value.

FPT is Vietnam's leading ICT Company with more than 25.000 employees in 19 countries worldwide. After 27 years of operation, FPT have provided IT infrastructure, contributing to the success of most of the county's key economic and social sectors, such as public services, banking and finance, telecommunication, transportation, healthcare, and education.