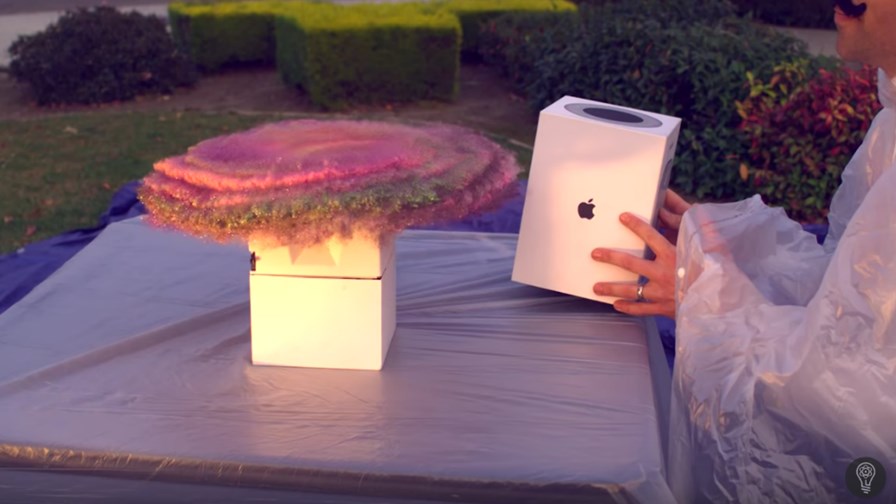 Well, here we are again. It's the start of the Christmas and New Year holiday season and as the world around us goes to hell in several handcarts and almost everyone dreads what 2019 might bring us, let's look on the positive side for a few minutes before peering back into the abyss. So, here's a jolly little festive piece showing how an outraged and determined former NASA engineer decided that enough is enough and turned his evident skills with technology to bear on thieves who persistently stole Amazon, Apple and other parcel deliveries from off his porch. A drumroll and trumpet fanfare please for the Glitterbomb and Fartspray Nemesis of the Porch Pirates.

Ex-NASA scientist, Mark Rober, suffered the theft of several parcels that had been left on his doorstep whilst he was out at work. His security cameras clearly show the robberies taking place and the faces of the thieves. Mr. Rober duly reported them to the police who informed him that the crimes were not important enough for them to investigate.

So, having been failed by the Serve and Protect brigade he decided to do something about it himself and, over the course of six months, constructed a spring-loaded, fully-baited glitterbomb and fartspray parcel that also included motion sensors, a GPS tracking device, a circuit board, microphones and four wide-angle mobile phone cameras. They were packed into an Apple Homepod box which was left on his porch.

Sure enough, and in no time flat, thieves arrived and the bait was taken. When the parcel's position was changed an on-board accelerometer detected the movement, checked the GPS signal and activated the phone cameras and the microphones to capture video and sound of the ensuing hilarious carnage and posted it off to the cloud.

When the thieves opened the package (usually in a car, which magnified the effects and made the them even more satisfying) a centrifugal motor kicked-in and spun a vessel filled with a pound weight of the tiniest, stickiest, ground-up glitter yet available to man and sprayed it across the thief/thieves and the inside of the vehicle. The opening of the package simultaneously triggered a foul-smelling fart spray which repeated its noxious duty every 30 seconds until the tube was exhausted.

The results are a delight to see. The video of several thefts and their aftermath are available to watch on a Youtube video. It was loaded on December 17 and has already been viewed more than six and a half million times. I urge you to watch it and add to that impressive number. The video is called "Package Thief vs Glitter Bomb Trap". (see above or on YouTube.)

Mark Rober, evidently a movie fan as well as a very smart engineer, actually left a clue that, had the thieves bothered to read the parcel label and known anything about films, clearly indicated that there would be trouble ahead. The package had ostensibly been sent by a certain "Kevin McCallister". Remember him? He was the boy played by Macaulay Culkin in the Home Alone films. The address on the parcel label was that of his fictional home in a posh suburb of Chicago. Bloody wonderful.

Even more amusingly, every time the stolen parcel was activated the spent remains were thrown out of car windows or otherwise abandoned - and since the GPS was still operating Mark Rober could go and find the package it, take it back home give it a clean and a deodorising, re-bait and re-rest the device and leave it outside his porch for another scumbag to steal. As Mr. Rober said, "If anyone was going to make a revenge bait package and over-engineer the crap out of it, it was going to be me." More power to your elbow, mate.

"Porch Thefts" now endemic in the US

It's an amusing story but the problem underlying it is serious and getting worse. The theft of delivery orders from doorsteps is reaching epidemic proportions, Indeed, according to a recent survey by Xfinity Home, which is  the home security service of the big US telco Comcast, more than 30 per cent of US citizens have had home delivery packages and parcels stolen over the past year. The police services are too stretched and undermanned to do much about it and few statistics are available that show the actual numbers of thefts reported. What is known that detection rates and subsequent prosecutions are minimal.
But now, back to the glitter-blitzed and stinking interior of a thief's car.

Take a look and listen to the foul-mouthed outrage they express at having been hoist by their own petard. To listen to it you'd think that they have the constitutional right to rob at will and not suffer any blowback, (if you'll forgive the pun). They are particularly aghast at the devastation that the glitter has caused to the inside of their vehicles. To paraphrase Oscar Wilde, "You would need a heart of stone not to laugh."
For the festive season, I for one am taking comfort in the probability that some of the thieves shown in Mark Rober's video will still be trying to get the glitter out of their cars and wash it out of their hair, nostrils, ears and various other bodily crevices and orifices until well into next year. Serves them right. Happy Holidays, especially to Mark Rober, a true hero for our times.