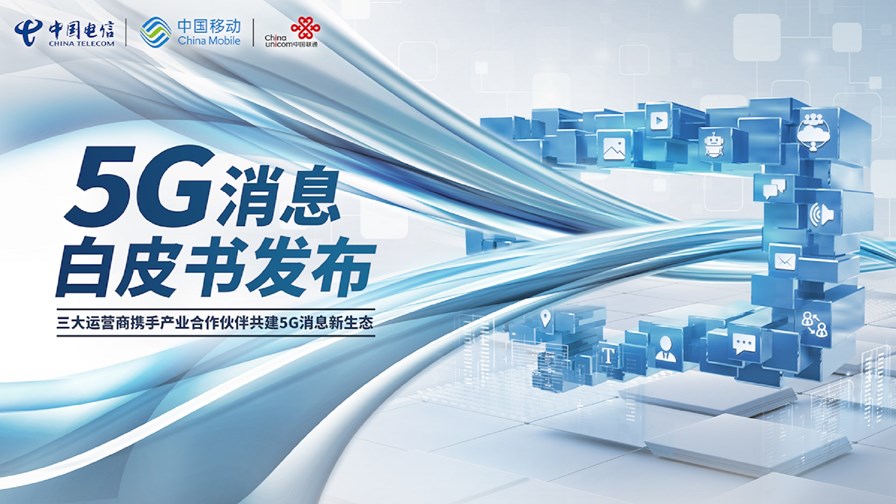 RCS got a new lease of life this week after China Mobile, China Unicom and China Telecom announced plans to launch a 5G messaging service underpinned by the GSMA-backed platform.

The three operators jointly published a new white paper setting out their ambition to create a new messaging ecosystem that will let consumers share more than just text, and that will open up a new marketing channel for enterprises.

It is being pitched as an upgrade to the venerable SMS, but in reality, it's more about taking on OTT players.

"For individual users, 5G messages will break the length limitation of each message by traditional SMS, and will also break through the text limitation in terms of content, so as to effectively integrate text, pictures, audio, video, location and other information," the operators said, in a statement. "For enterprises, 5G messaging will provide an information interaction interface with individual users. Enterprises can output personalised services and consultations to users through rich media such as text, voice, and tabs."

In a nutshell, this is China Mobile, Unicom and Telecom challenging the likes of Tencent and Sina head on. Tencent owns widely-used chat app, WeChat, and Sina owns popular microblogging service Weibo.com.

WeChat already boasts more than a billion users, and functionality-wise it offers more than just comms, but also social feeds, digital payments and enterprise messaging. As such, the three operators might have a hard time trying to convince consumers to use it alongside RCS, let alone make RCS their preferred comms channel.

What they have managed to achieve though is a strong starting line-up of vendor partners that have committed to integrating RCS into their 5G handsets.

So far, 11 companies have signed up, including Hisense, Huawei, Lenovo, OPPO, Samsung, Vivo and ZTE, among others. If they coordinate their efforts, commit to heavy promotion, and pitch it as a 'must-have' service that goes hand-in-hand with a sparkling new 5G service, then they might just turn a few heads.

There is no getting away from it: RCS has a chequered past.

It requires a coordinated effort from operators and vendors to support and promote RCS-based services on their handsets in order to ensure its availability to, and uptake from, the largest possible user base.

In a lot of places that didn't happen, leaving a vacuum that was readily filled in many markets by app-based alternatives that went viral, like WhatsApp.

In 2012, the GSMA launched a consumer-facing brand for RCS, called Joyn. That did little to whip up any kind of enthusiasm as OTT messaging services were well and truly established by then.

Nonetheless, RCS could be called the GSMA initiative that refuses to die, and it can now lay claim to having been rolled out by 88 operators in 59 markets, according to GSMA Intelligence.

The GSMA claimed recently that RCS is proving a hit in Japan, where it was launched in 2018 under the +Message brand by DoCoMo, KDDI and Softbank. Using data gathered by Mobilesquared, the GSMA said in March that +Message currently has 17.5 million active users in Japan, a figure that is expected to rise to 40 million by 2021.

Now that a market the size of China has committed to it, RCS might finally start to gain the kind of traction the GSMA has been chasing for more than a decade.