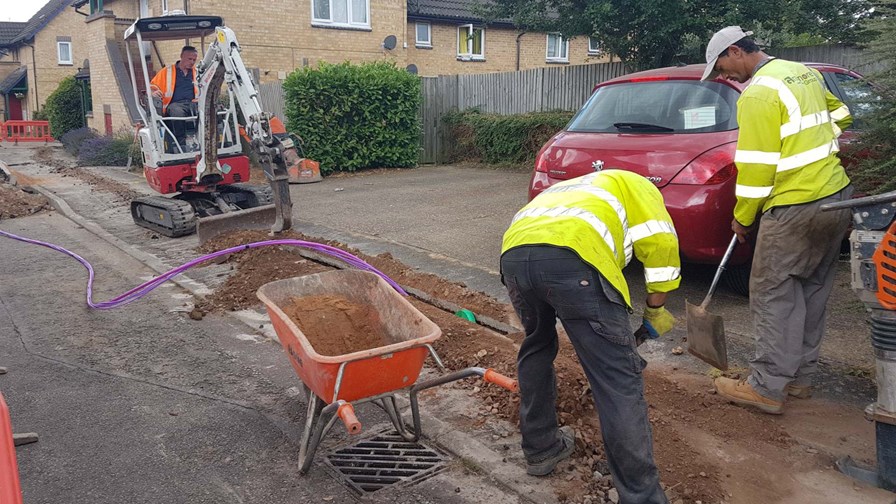 Digging in the fibre old style

As the clock ticks down on the political promise to bring full, superfast fibre-optic broadband to the entire UK, attention is turning to technologies and systems that a will greatly accelerate the speed at which trenches can be dug, fibre laid and the excavations re-filled with flexible, long-lived, highly durable, recycled materials.

If the government target is to be met, traditional methods that currently see about 100 metres of cable laid per trench, per day will have to be superseded by systems that can achieve 10 times that and more. Some companies are developing and trialling such systems now and hopefully the results will be evident by this time next year.

So, with the brief spasm of relative freedom enjoyed by we Brits over the heady days of high summer now well and truly behind us, we face an autumn and winter of renewed and enhanced restrictions and even the threat of a return of the full lockdown that brought the nation to a juddering, economy-destroying halt back in the spring.

The government, already a laughing stock for its mixed and contradictory messaging on the Covid-19 pandemic, calls its latest directive the "Rule of Six". It comes after "The Sign of Four" and "The Famous Five" and will no doubt be followed by "The Secret Seven", "When Eight Bells Toll" and, just in time for the Conservative Party Conference, the re-release of "If Six was Nine" by Jimi Hendrix played by Health Secretary, Matt Hancock, with his teeth, on a Fender Stratocaster.

However ludicrous and over-blown the ever-changing initiatives are, one thing is for sure: pressures on the UK's telecoms and Internet infrastructures are not going to lessen anytime soon. Britain is sliding quickly down the broadband speed ranking tables having dropped 13 places over the course of the past 12 months.

We now sit at Number 47 in the charts, and we certainly ain't 'bubbling under' before suddenly leaping up the list to become 'number one with a bullet". According to the latest research by Cable.co.uk, ISPs and CSPs in eastern and western Europe provide the fastest speeds while the UK is an also-ran; one slowest countries for broadband access on the continent with average speeds of 37.82Mbps.

Exactly a year ago the UK regulator, Ofcom revealed that just eight per cent of all UK premises were connected to full-fibre broadband. Openreach is aiming to connect 15 million premises to and bring them to that state of near-nirvana within the next few years but warns it will only be able to do this with government help. Further to this, the Prime Minister has pledged that the UK will have full, 100 per cent access to fibre optic broadband by 2025. Meeting that target will mean massive disruption on the country's roads and pavements.

We constantly hear about the intricacies of fibre-optic technology but very little indeed about changes in the trenching technologies, materials and machines that are now being trialled and will greatly help to accelerate the speed of fibre-optic rollout. Digging holes in roads just isn't sexy but it is vital to the programme, so, for a well-deserved change here's the nitty and definitely gritty on the technological innovations and green credentials of the Cinderella of broadband deployment.

This morning I had a long and informative chat with Harry Pearl, the CEO of Sheffield, Yorkshire-based Roadmender Asphalt, a materials manufacturer and supplier whose catchy tagline is "We Recycle Roads". He told me that, currently, trenches to take fibre-optic cables are cut wide and slowly to allow enough room for traditional asphalt to be compacted and re-instated. So, while robots exist that can cut a kilometre of trench as mere 8mm wide, most trenches are still cut with a saw and a digger in lengths of 100 metres per day at 150 - 400mm wide.

It's slow, disruptive and requires large amounts of materials to be excavated and then replaced with new materials. It is also expensive and has a big carbon footprint - there are so many expensive and polluting truck-rolls transporting spoil because today's trench cutting methodologies result in a "carry out" rate of five tons per 100 metres of cut trench. Round that up by a factor of a few tens of millions and you can begin to see the scope of the problem and the need for new solutions.

It is evidently high time for a change and Roadmender Asphalt has developed flowable products made from recycled materials that require no compaction and can be placed in narrower trenches at at least double the current rate and in some cases at three or even four times faster. These flowable materials require 85 per cent less materials to be excavated and replaced in the process while also reducing labour costs, vehicle movement, waste and general disruption to the public.

The new Roadmender solution is based on the properties of British Standard 'Polymer Modified Mastic Asphalt' (or PMMA, for short). PMMA provides exceptional durability, increased flexibility at lower temperatures, and greater stability at higher temperatures and is ideal for use by telcos and ISPs laying fast broadband access cables because it is tough, waterproof and quick and easy to apply. What's more, it comprises 65 per cent of recycled materials while the final sealant has nine big old used tyres recycled and amalgamated in every ton.

Sustainability also a big part of the equation

Harry Pearl says that big municipal authorities through to smaller urban and rural councils as well as utilities and CSPs, DSPs, and ISPs are very interested in the new approach and being very supportive in terms of trialling the systems and minimising bureaucratic hurdles to permit faster fibre optic rollout. What's more, as Harry Pearl puts it, "It puts a big tick in the sustainability box." And that's even more important to national and local authorities as well as telcos and network providers.

Roadmender Asphalt has been testing and stressing the new materials and system in four major trials in the North of England for major national telcos and Internet companies all of which have professed themselves very satisfied with the strong and speedy results. The company has been working to the latest specification for PMMA which was published by the government in March this year and will become law in March 2021. It is the company's intent to be in the vanguard of the application of the new technologies and to have a head start on the market when the new specification becomes obligatory in six months time.

He adds that the contractors who actually did the digging, cable laying and material reinstatement during the trials were a tad suspicious of the new system at first but once they had a few days actually applying it, became enthused about the ease, speed and efficacy of it in comparison to the slow old traditional method and were quickly converted to what is expected to become the new norm.

Harry Pearl says, "We are dedicated to the development and provision of disruptive new technologies, products and materials that will benefit telcos and Internet service providers to meet government targets whilst also helping to meet sustainability goals and greatly reducing disruption to the public".

The company has a history of providing different sustainable materials for sectors such as national, regional and local road construction and maintenance, airport infrastructure, ports, utilities and the telecoms industry. It has big plans for the future.

Harry Pearl says, "There's this huge national broadband project underway and as that progresses there are plans emerging for the deployment of electric-vehicle driving infrastructure across the entirety of the UK, which is another mammoth, long-term undertaking". Roadmender Asphalt very much wants to be part of that as well.