NTT DoCoMo gets its O-RAN working 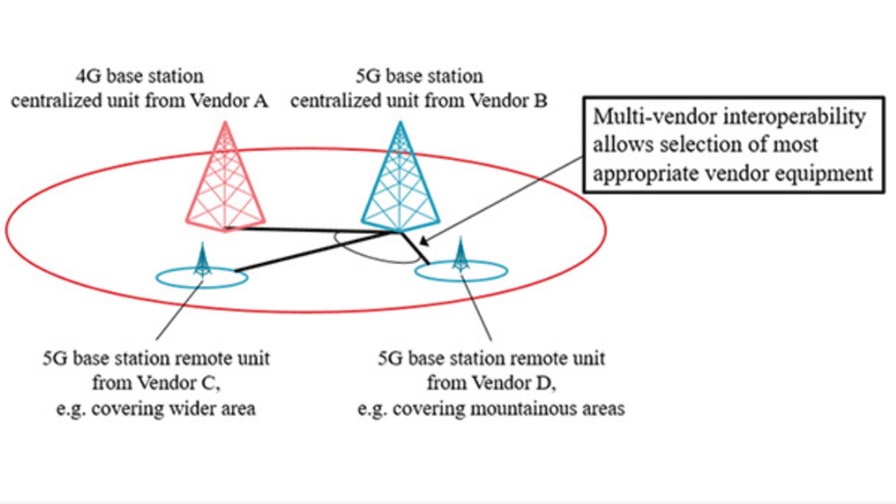 NTT Docomo has announced that it and a clutch of vendors (Fujitsu, NEC and Nokia) have  achieved multi-vendor interoperability across a variety of 4G and 5G base station equipment, thanks to the compatibility standards forged by the Open Radio Access Network (O-RAN) Alliance. It has been working away to create more open and intelligent next generation radio access networks, including 5G networks, to overcome the carefully contrived vendor ‘non-interoperability’ which has, up to now, stymied the technical reform of the RAN environment.

RAN fronthaul describes the connectivity between remote base stations and centralised  cell units (as above), enabling multiple remote units to be serviced by a single central baseband unit using standards. That consolidation is a great step forward economically, depending on the deployment scenario. But such standards can spread even more benefits as they mean that, ultimately,  radio heads and baseband units may be mixed and matched to create a fully multi-vendor RAN.

Docomo says that absent such standardisation, network operators have typically utilized base station equipment from the same vendor, and the choice of equipment has therefore tended to be limited.

It says its O-RAN implementation is believed to be the world's first realization of this level of multi-vendor interoperability in 4G and 5G base station equipment.

“The ability to deploy and interconnect base station equipment from different vendors will make it possible to select the equipment most suitable for deployment in any given environment, such as base stations offering broad coverage in rural areas or small base stations that can be deployed in urban areas where space is limited,” it claims. “This will in turn allow more rapid and flexible expansion of 5G coverage.”

The company claims the centralization of the baseband processing will bring with it the following benefits:

Docomo says it will deploy the equipment in the pre-commercial 5G service it plans to launch on September 20, 2019 in Japan.

“Concurrent with the pre-commercial launch of its 5G services, Docomo will expand 5G coverage by combining 5G networks with existing 4G networks using equipment from diverse vendors. The international standardization of signal transmission specifications that will enable this follows lengthy discussions within the O-RAN Alliance, which Docomo is chairing."