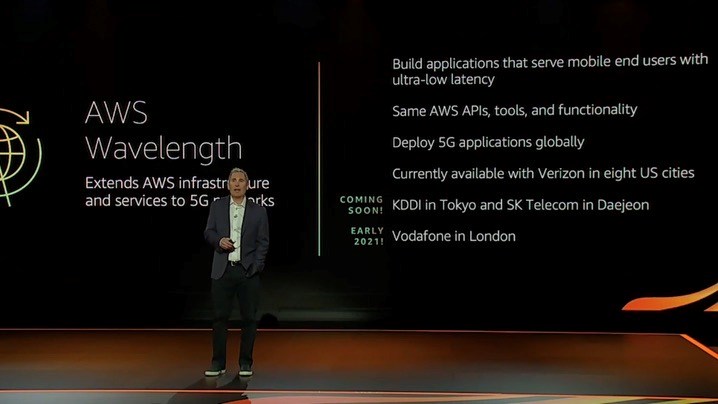 A year after Amazon Web Services (AWS) announced four big name telco partners for its Wavelength edge compute and storage nodes, the full quartet are on the verge of commercial service offerings and providing a glimpse of what the telco edge might actually deliver for users and for the telcos themselves.

In the US, Verizon has been rolling out Wavelength-based edge computing services throughout this year and now has nodes in eight locations – Atlanta, the San Francisco Bay Area, Boston, Dallas, Las Vegas, Miami, New York and Washington, DC – with two further markets to go live this month.

“By leveraging the powerful combination of Verizon 5G Edge and AWS Wavelength, developers can deliver a wide range of transformative, latency-sensitive use cases like automated robotic systems in manufacturing facilities and smart cars and cities,” stated Tami Erwin, CEO of Verizon Business, in the press release that announced Las Vegas as the eighth market this week. “We already have customers today creating exciting new applications in industries ranging from healthcare to sports and we can’t wait to see the next game-changing app that will be built on 5G and MEC.”

Now Verizon is set to be joined in the coming weeks by its Asian peers. In his opening keynote speech at the AWS re:Invent conference this week, AWS CEO Andy Jassy (pictured above) announced that KDDI would be launching a Wavelength-based service in Tokyo “soon,” while SK Telecom would be launching its service in South Korea’s fifth largest city, Daejeon.

Europeans have to wait a little longer: Vodafone Business will begin offering services from a London node during the first half of next year and also launch services in Germany a little later. Vodafone has undertaken multiple trials with different types of enterprise users, including a drone monitoring company and a frontline healthcare worker video analytics specialist, to test applications that require the sub 10 milliseconds the operator claims is enabled by the Wavelength node. (See Vodafone Business gives organisations in Europe the edge with AWS Wavelength.)

Details of such examples will be key for other operators and enterprises still figuring out just how edge computing might factor into their operational and business strategies.

And news of the imminent launches may go some way to calming the nerves of the AWS team, which has been dealing the fallout in recent days of the service outage that struck in one region of the US last week, an incident that may have had some potential partners and customers looking again at their plans and agreements.

Jassy also announced two new smaller, more compact form factors (1 RU/2 RUs) for its Outpost edge product, which is a distributed compute/storage element that is fully managed by AWS rather than a partner. See this AWS announcement for more details.