What’s up with… WhatsApp in India, American Tower, Cellnex, Nokia

WhatsApp’s launch of a mobile payments service in India, more significant activity in the mobile towers market, and the departure of a senior Nokia executive provide the spicy sauce for an enormous plate of news nachos.

Facebook-owned WhatsApp has launched a secure money transfer service in India, making “transferring money just as easy as sending a message… People can safely send money to a family member or share the cost of goods from a distance without having to exchange cash in person or going to a local bank.” WhatsApp says it designed the payments feature “in partnership with the National Payments Corporation of India (NPCI) using the Unified Payment Interface (UPI), an India-first, real-time payment system that enables transactions with over 160 supported banks. We’re excited to join India’s campaign to increase the ease and use of digital payments, which is helping expand financial inclusion in India.” This is an interesting move, especially in a country of nearly 1.4 billion people and more than 955 million active mobile accounts (at the end of July, according to regulator TRAI), but differs from many mobile-based money transfer services because to use the WhatsApp service, users must “have a bank account and debit card in India.” In many emerging markets, mobile financial services applications provide a fiscal lifeline to those who do not have a bank account. For more details, see this WhatsApp blog.

The smart (and big) money in telecoms infrastructure right now is going into neutral, shared assets. In Europe, Cellnex is building an empire with its cheque book, while across the Atlantic, American Tower has announced a $3.5 billion deal to acquire InSite Wireless Group, which has a portfolio comprising more than 1,400 owned towers in the US, more than 200 owned towers in Canada, approximately 70 distributed antenna system (DAS) networks in the US, about 400 rooftop sites and more than 600 ‘land parcels under communications sites. American Tower expects that portfolio to generate about $150 million in property revenues in the first year of ownership. The news comes only a week after American Tower announced third quarter revenues of $2 billion and a net profit of $463 million. The company has 181,000 communications sites in its portfolio, of which 41,000 are in the US, more than 74,000 are in India, more than 41,000 in Latin America, just over 19,000 in Africa and about 5,000 in Europe (the vast majority in France, with 2,825, and Germany, with 2,211). The company’s market value currently stands at approximately $107 billion. Anyone wishing they were running a cellular towers business right now? For more on the deal to acquire InSite, read this press release.

Cellnex, meanwhile, is showing its diversity by rolling out an LoRa-based IoT network in the Valencia region of Spain with partner Global Omnium: The network will be used for water management, the company notes in this press release.

And still with the European neutral host company…. It is raising €1.5 billion from the issue of convertible bonds as it seeks to “shore up its balance sheet” as it continues to grow through acquisition deals. See this press release for more details.

More news from the world of towers ownership... Bloomberg reports that Airtel Africa is seeking to offload about 4,500 towers across five countries in order to reduce its debt load.

Further changes at the top at Nokia… CMO Barry French is leaving the company at the end of 2020 after 15 years at the vendor. The news was announced on Twitter, with a statement from the vendor’s new CEO Pekka Lundmark: “Barry has been at the heart of transforming Nokia into a leader in telecom network infrastructure, repositioning the company and significantly increasing brand value. All of Nokia owes him their thanks and he leaves with my respect, appreciation and gratitude.” Lundmark unveiled a restructuring plan late last month that will result in a slimmed down top management team, of which French is currently a member, and a new divisional structure. Further departures and upheaval seem likely. (See Nokia CEO unveils restructuring plan as sales decline, margins improve.)

Huawei has appealed against the Swedish move to exclude it from involvement in the country’s 5G network infrastructure builds, according to Reuters, which reports that the Swedish telecoms regulator, PTS, will refer the matter to the administrative court of Stockholm. Huawei says it wants the court to consider whether the decision has been taken through the proper processes.

The US Department of Justice has seized, and will likely liquidate, over $1 billion worth of Bitcoin, the largest amount of the crypto-currency yet sequestered by the agency. The move came after it was observed on Wednesday that 70,000 Bitcoins had mysteriously moved from an account with direct links to the infamous, but now ostensibly defunct, Silk Road black market website. The US authorities shut down Silk Road back in 2013 after it was proven to be primarily a darknet criminal enterprise where hitmen could be hired, children bought, and drugs sold. It was operated as a Tor hidden service so that online users were able to browse it both anonymously and securely without being identified or the traffic being monitored. Silk Road's founder, Ross Ulbricht, was convicted in Federal Court of seven counts of criminality relating to the operation of Silk Road (including attempting to hire an assassin to kill rivals) and in 2014 was sentenced to life in jail without possibility of parole. After he went to the Big House, it was suspected there was still a lot of Silk Road money hidden away somewhere. Now it seems that someone the US Internal Revenue's Criminal Investigation Unit are referring to "Individual X" has attempted to hack hidden Silk Road funds and lost a billion dollars in the process. Oh dear. How sad. Never mind.

In the US, the National Advertising Division of the Better Business Bureau (BBB) has taken T-Mobile US to task for a misleading online and TV 5G advertising blitz, reports GSMarena. The BBB is a venerable (founded in 1912, the year the Titanic went down), influential, independent not-for-profit organisation that promotes and monitors advertising standards that are voluntarily self-regulated by the businesses that are members. T-Mobile has fallen foul of the BBB's requirements because the advertising in question could lead customers to think that the T-Mobile and Sprint networks have completely combined and that the amalgamation will be of instant benefit to existing or would-be T-Mobile 5G subscribers. Which it won't, because whilst the $26 billion merger between the two networks is legally complete, technologically and operationally it is not, even though the brand name ‘Sprint is now defunct. T-Mobile was the victor in the merger battle and kept its name. Now it chunters on about building "America's largest 5G network" and boasts, "T-Mobile’s 5G network will have more towers, more engineers, and more coverage” than any other 5G networks in the States. Verizon took great exception to the claim and complained. The BBB found that T-Mobile's ads might be true at some indeterminate time in the future, when the merger with Sprint is completely done and dusted in every respect, but they certainly are not true in the present. T-Mobile quickly accepted the adjudication, will pull the ads and stop claiming that it is "building a 5G network that will deliver unprecedented… reliability, and the highest capacity in history," because it isn't. Not yet, anyway.

The slapdown came as T-Mobile US reported better than expected financial results for the third quarter and more than 2 million new customers, taking its total to 100.4 million at the end of September. Full details can be found in this press release. 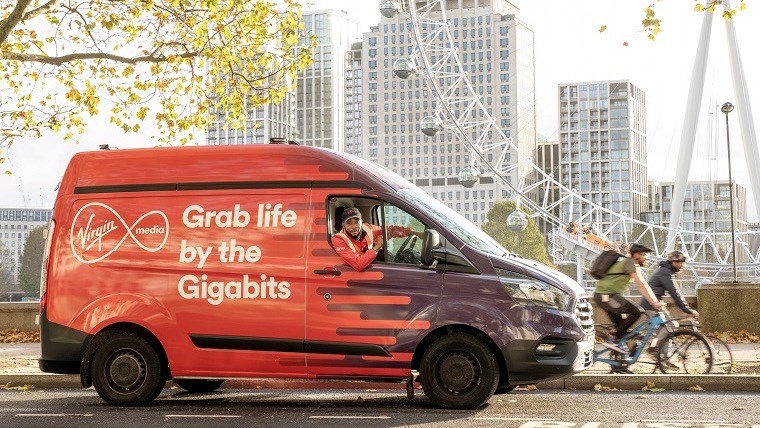 Virgin Media is aiming to stay a step ahead of BT, in terms of marketing at least, with the launch of gigabit broadband services in areas of London and across Northern Ireland that takes its gigabit reach across the UK to 6.8 million homes. The cable operator, which is using DOCSIS 3.1 technology to enable the genuinely speedy broadband services, says it’s on track to offer gigabit broadband across its entire network (which reaches about half of the UK’s circa 32 million homes) by the end of next year. See this press release for more details.

The gigabit service announcement came as Virgin Media, which is aiming to merge with mobile operator O2 UK (Telefónica UK), announced its third quarter numbers, which showed a slight year-on-year increase in revenues to £1.29 billion but a dip of about 3.6% in adjusted earnings to £514.5 million. The operator said it recorded its best quarterly customer gain for three years as its total number of fixed line customers passed 6 million. For more details, see this press release.

A follow-up to yesterday’s item on 5G small cells in Italy… The team at TIM (Telecom Italia) tells us that the small 5G RAN nodes being deployed in partnership with towers firm INWIT will be for TIM’s use only, and that technology from multiple vendors will be used, though the initial rollouts in Milan and Genoa will use small cells supplied by Ericsson.

Canadian operator Telus has reported a 7.7% increase in third quarter revenues to C$4 billion and its best ever customer growth numbers, as well as the acquisition of digital customer experience specialist Lionbridge AI.

And here’s something right up our strasse… Swisscom has developed an eSim solution for international IoT applications that… wait for it… is being “used by Schaerer and WMF in their global professional coffee machine business.” As Jochen Bauer, Digital Solutions Product Manager at WMF Group GmbH, explains: “Our professional coffee machines have been network-connected for years to facilitate product optimisation on the basis of operating and usage data. Our aim is to offer our customers the best coffee machines and integrated solutions to optimise their coffee business, without concerning ourselves with local networking solutions or coming up against regulatory issues.” Fantastiche…