What’s up with… STM and GlobalFoundries, American Tower, TIM 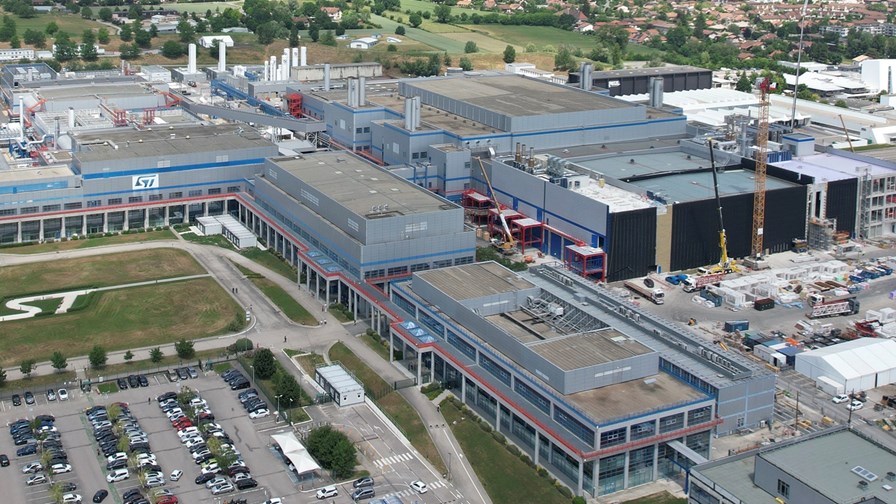 Extension work is underway at ST's Crolles site in France.

STMicroelectronics (ST) and GlobalFoundries (GF) are to jointly develop and build a new chip fabrication plant in Crolles, south-east France, next door to ST’s existing facility. The facility will be running at full capacity by 2026, the companies noted in a press release about the development. The companies say the new facility will “support several technologies, in particular FD-SOI [Fully Depleted Silicon On Insulator]-based technologies, and will cover multiple variants. This includes GF’s market leading FDX technology and ST’s comprehensive technology roadmap down to 18nm, which are expected to remain in high demand for Automotive, IoT, and Mobile applications for the next few decades.” The move should be a welcome one for European bodies such as the EU and France, as well as other European countries both individually and collectively, which are keen to beef up chip manufacturing and design capabilities in the region and reduce Europe's reliance on Asia and North America.

American Tower is selling a 29% slice of its US datacentre business to infrastructure investor Stonepeak for $2.5bn, a deal that gives the whole datacentre unit a valuation of $10.5bn. "The transaction will position American Tower and Stonepeak to mutually benefit from the demand for low-latency, hybrid IT solutions and agile interconnection across the platform’s datacenter campuses, which are strategically located in key US metro areas. The platform’s datacenter portfolio consists of 27 datacenters in 10 US markets, more than 450 networks, 23 native cloud on-ramps and over 35,000 interconnections," noted American Tower. Tom Bartlett, president and CEO at American Tower, suggested the deal would herald further M&A activity. He said the deal "creates a platform through which growth opportunities can be strategically evaluated and financed, with American Tower and Stonepeak committed to executing on opportunities as the 5G ecosystem continues to develop.”

Telecom Italia (TIM) seems to be more and more involved in the digital transformation strategy of its domestic market. After using an “pre-emption right” to create a cloud-based infrastructure for the digitalisation of the Italian public administration, it has now reached an agreement with Confimi Industria (Confederation of Italian Manufacturing Industry and Private Enterprise) to encourage the adoption of digital solutions by more than 45,000 small and medium-sized manufacturing companies. As part of the deal, TIM will offer connectivity solutions and “advanced services for business development”, such as cloud and edge computing services offered through its Noovle unit, internet of things solutions provided by Olivetti, cybersecurity from Telsy, and international services by Sparkle. SMEs will also have access to free consulting from TIM, which stated that all its solutions will help enterprises in the manufacturing sector unlock new business opportunities – find out more.

The sale of eSIM and mobile virtual network operator specialist Truphone to German businessman Hakan Koç for just £1, which was announced last month, has been held up by a security probe into the deal by the UK government’s Department for Business, Energy and Industrial Strategy (BEIS), according to Sky News. The nature of the security concern is currently uncertain: Truphone, which counts Russian businessman Roman Abramovich among its investors, is believed to do some business with the UK’s national operator BT, which may have triggered the security concerns. The probe is being launched by the BEIS under the authority of the National Security and Investment Act, which is also being used to investigate the sale of Newport Wafer Fab and the purchase of an 18% stake in BT by Patrick Drahi – see British government cites security concerns as it probes Drahi’s BT stake and the sale of Newport Wafer Fab.

The Elon-Musk-buying-Twitter-for-$44bn saga has taken a new twist: Musk has decided he doesn’t want to go through with the deal after all. His legal team laid out the reasons for the termination of the takeover in a letter that was shared by Twitter in its filings to the US Securities Exchange Commission (SEC). The eight-page letter can be accessed here, but the main bone of contention from the Musk team is that twitter allegedly did not provide all the information demanded, especially about spam and fake accounts. The Twitter board, naturally, isn’t letting this go: It is ready to go to court to force him to close the deal, reports The Guardian. The whole affair has been extraordinary given that originally the Twitter board tried to block Musk’s takeover offer and now it is trying to force through the deal. The prevailing view in the business media and from analysts – see this insight from the always-excellent Richard Windsor – is that Musk offered way too much and Twitter shareholders will likely never get a better valuation for their stock, and that Musk will either have to go through with the deal or pay the circa $1bn break-up fee, which he is trying to get out of by accusing Twitter of not keeping its word. You will need more popcorn if you’re following this cliffhanger…

In Canada, Rogers Communications has really hampered its chances of getting the green light to merge with Shaw Communications by suffering a massive service outage late last week that had critics calling for greater competition in the country’s communications services market rather than consolidation, reports Reuters.

French mobile virtual network operator La Poste Mobile, which serves the SFR mobile network, has been hit by a ransomware attack that may have compromised the personal data of its circa two million customers, reports Cybernews.