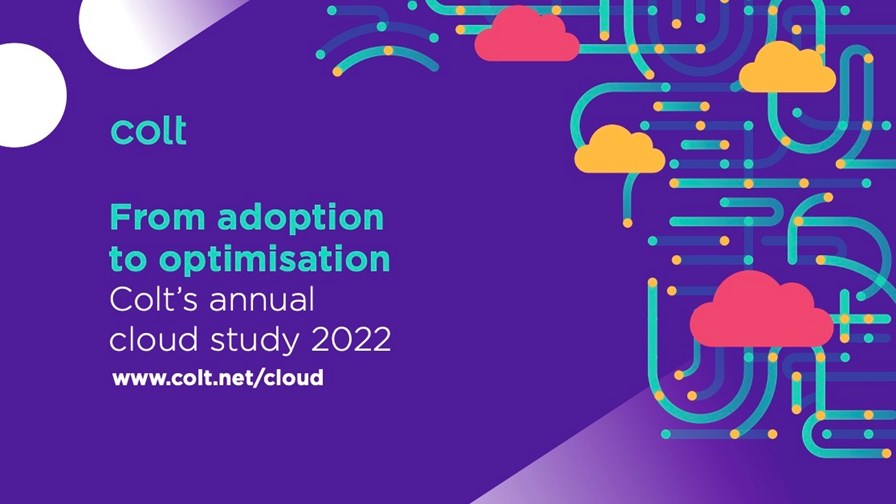 In today’s industry news roundup: About half of major enterprises are about to splurge on cloud services, according to the findings of a survey by Colt; ABI Research and InterDigital have published a 5G economic impact report with some big headline numbers (in the trillions of dollars); Cisco fiscal fourth quarter report and commentary will ease some supply chain concerns; and more!

About 50% of enterprises are gearing up for their largest ever investments in cloud services during the next 24 months, according to network operator Colt, which conducted a survey in April and May of 500 IT and C-suite decision-makers at companies in the UK, Germany, France, Italy, Spain, Singapore and Japan for its annual cloud report. Jaya Deshmukh, executive vice president of strategy and transformation at Colt, noted: “This year’s report highlights that businesses plan to invest heavily in the cloud over the next two years and that some perceived challenges around cloud migration were largely unfounded. This was put down to the key role partners play in delivering successful cloud deployments – both in terms of setup and optimisation.” According to research firm Gartner, the worldwide cloud services market is set to be worth $474bn this year, up by about 16% year on year. The Colt report includes multiple insights and takeaways, including the finding that “sustainability remains a core component of cloud adoption for decision-makers”. Read more.

Think it’s hard to quantify the economic impact of 5G so far? Then try having an accurate stab at what sort of impact it might have in eight years’ time! That’s exactly what ABI Research and InterDigital have done in a new digital publication, the State of 5G Report: Enabling The Boundless Generation. [Editor’s note: Wasn’t that a Star Wars film?] The outcome? “5G is set to generate $7tn of economic value in 2030,” is the headline outcome – and yes, that’s $7tn in one year alone. Such numbers have a precedent, though, in terms of research methodology and in sheer size: As the report notes, “According to ABI Research analysis, 4G alone has created more than $4.9tn in global gross domestic product (GDP) during 2018, including direct revenue (mobile subscriptions), indirect revenue (infrastructure sales), and productivity enhancements that many of us take for granted nowadays.” (For context, according to the World Bank, global GDP in 2018 was just over $86tn.) If you want to know more about how the $4.9tn and $7tn figures are determined, please check out the report, but based on that historical 2018 figure, which has the massive benefit of looking back and seeing what actually happened and then bashing away on a calculator, you can see how a figure of $7tn might emerge. All these figures aside, it’s worth taking a plunder through the report because it is a compendium of lots of snippets of research findings related to 5G that are interesting – there’s a particularly interesting chart on the percentage of revenues invested in R&D by a handful of telecom technology vendors. So if you can get past the mahoosive numbers used as the hook (and they reeled in this editor, obviously!), then check it out - there’s a link in this press release.

Cisco’s fiscal fourth-quarter and full-year report gave some hope to the rest of the tech and networking sector as the infrastructure giant suggested the supply chain issues that have been the bane of so many vendors’ operations over the past couple of years are starting to ease. “​​After a challenging April due to the Covid-related shutdowns in Shanghai, and the impact on semiconductor and power supplies, overall supply constraints began to ease slightly at the back half of the fourth quarter [which ended 30 July] and continuing into the start of Q1,” noted CEO Chuck Robbins during the company’s earnings conference call held late on Wednesday. “While the component supply headwinds remain, they have begun to show early signs of easing. The decisions we made and the multiple actions we have taken over the past two years are helping to improve our resiliency and will help offset cost inflation. These include adding new suppliers, leveraging alternative suppliers, redesigning hundreds of products to use alternative components with similar capability and targeted price increases, all of which position us for the future,” he added. As a result, for the fiscal 2023 period that has just started, “we expect strong performance across our portfolio, driven by our continued focus on innovation and easing of supply constraints to drive solid top-line growth and profitability. While we anticipated some moderation from the unprecedented product order growth of last year, demand signals remain solid,” he added. But then, of course, there is inflation. “We do expect to continue to experience higher costs in the short term, driven primarily by higher component, freight and logistics costs, which is reflected in our Q1 guide. However, as you'll see in our annual guidance, we expect this margin pressure to begin to ease as the year progresses,” concluded Robbins. Cisco reported fiscal fourth-quarter revenues of $13.1bn, about the same as the corresponding quarter the previous year, and full fiscal year sales of $51.6bn, up by 3%. Cisco’s stock gained 6% to $49.44 in early trading on the Nasdaq on Thursday. For further details on its financials, see this press release.

Semiconductor company MediaTek claimed a world first, having powered a smartphone with a satellite 5G non-terrestrial network (NTN) connection in a lab environment. Testing its New Radio (NR) NTN-enabled chip and using equipment from Rohde & Schwarz, MediaTek managed to emulate a realistic low-Earth orbit (LEO) satellite constellation at 600km altitude where speeds are nearly 27,000km/h, and to transfer data to the Industrial Technology Research Institute’s Next Generation NodeB network (gNB). The company said its demo shows how 5G NTN technology can be used for satellite communications simply by employing the same form factor and design components as a standard smartphone. “5G NTN technology will help boost service reliability across the globe by harnessing existing terrestrial networks and economies of scale in the cellular sector, making fast and reliable 5G connectivity much more accessible in unserved and underserved areas”, MediaTek explained in a statement, available here. In terms of enterprise use cases, the company claims the technology has numerous opportunities in terms of critical communications, transportation, agriculture, fleet and heavy machine management, and internet of things devices.

Australian operator Telstra issued an update on the ways its technology helps customers tackle climate change by reducing greenhouse gas (GHG) emissions. According to a Deloitte report, commissioned by Telstra, in 2021 the telco enabled its customers to save 2.7 million tonnes of carbon dioxide equivalent (CO2e) emissions (a measure that compares the emissions from various GHGs based on their global-warming potential). It achieved this through 11 technology use cases, including systems to control heating, ventilation and air conditioning (HVAC control systems), smart meters, smart grids, cloud technology and renewable energy sources. The report also predicts that Telstra’s products and services could help customers avoid more than 41 million tonnes of CO2e by 2030. “For many businesses and government organisations, while the science on climate change is clear, the pathway to reducing emissions isn’t. Increasing the adoption of new technologies, such as smart HVAC, fleet management, remote working and cloud technologies are some of the ways Australia’s offices, supply chains and warehouses can become greener”, commented Telstra’s head of environment, Tom Penny. More information on the findings can be found here.

A new report from Juniper Research forecasts that, during the next five years, the ever-increasing amount of data being generated by ‘roaming’ internet of things (IoT) devices will be so great that the only way to handle the deluge and ensure the whole shebang doesn’t just curl up and die will be the mass redistribution of data to low-power wireless networks. ‘Roaming’ IoT sensors and other devices are those that latch-on and connect to a network that is not their registered and designated ‘home’ network. Such a roaming connection can be either temporary to facilitate the performance of a specific act (that’s the majority of them) or permanent (the minority). This happens because roaming IoT devices can connect to a range of different radio frequency (RF) technologies, such as 3G, 4G and 5G, low-power wide-area (LPWA) networks, radio-frequency identification (RFID), narrowband (NB-IoT), long-term evolution for machines (LTE-M) and Wi-Fi 6, the most recent iteration of the Wi-Fi network protocol that provides faster throughput speeds and better battery life while significantly reducing bandwidth congestion. Juniper Research calculates that the 86 petabytes (Pbytes) of data generated by roaming IoT over the course of this year will rise to 1,100 Pbytes by 2027 (1 Pbyte = 1,000 Tbytes). The expected massive 1,140% increase in growth between now and 2027 is, in part, down to the mothballing of 3G networks during the next five years. Roaming IoT connections will be handed off to LPWA networks depending on parameters that have yet to be decided. In terms of geographies, in the US, both AT&T and Verizon will finally shutter their 3G networks by 31 December this year. The report says roaming IoT connections in the US alone will generate 277 Pbytes of data in 2027, thus accounting for 26% of the global grand total. Furthermore, US telcos will have to accept and sign-up to the Billing and Charging Evolution (BCE) protocol. For 31 years, the telecom industry has used the Transferred Account Procedures (TAP) for roaming billing and settlement requirements. TAP has worked well since 1991 but is too rigid and complex to properly support IoT and 5G and the BCE process is being pushed as a simplified and flexible optional settlement method that will easily meet any telco’s wholesale roaming settlement requirements. The protocol will be fundamental to the accurate and timely identification of IoT traffic utilising their networks. Scarlett Woodford, author of the Juniper Research report, commented, “Failure to do so will risk revenue leakage if lucrative 5G roaming IoT traffic is misidentified as lower-value connectivity.”