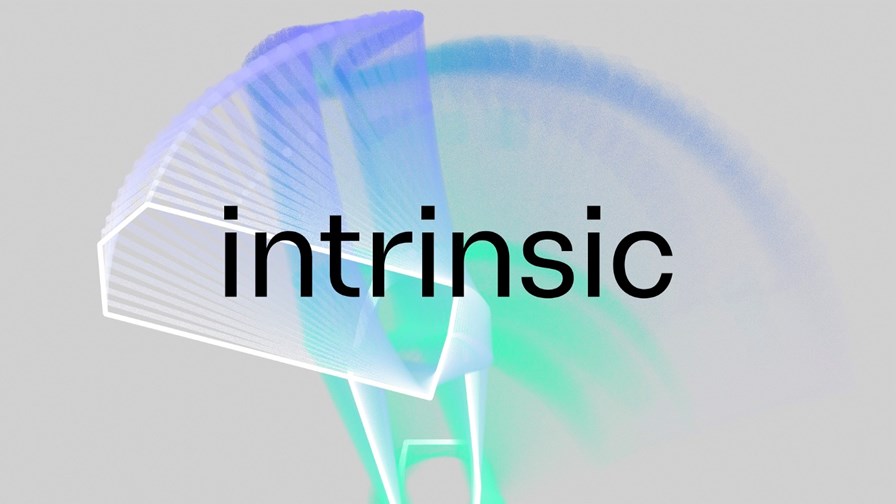 Alphabet, Google’s parent company, has launched Intrinsic, a new unit that is “working to unlock the creative and economic potential of industrial robotics for millions more businesses, entrepreneurs, and developers. We’re developing software tools designed to make industrial robots (which are used to make everything from solar panels to cars) easier to use, less costly and more flexible, so that more people can use them to make new products, businesses and services.” Intrinsic, which is a new Alphabet company spun out of its “moonshots” division (which is called X), is headed up byWendy Tan-White, who explains in this blog that the technology has been under development within X for more than five years but is now ready to leave the “rapid prototyping environment to focus on developing our product and validating our technology.” The development is, of course, interesting to all enterprises and it seems likely that as Intrinsic is developing software, its output will be available via Google Cloud and be of interest to those companies seeking to develop automated work environments that, in many instances, will require low-latency, high-speed wireless connectivity. As much as telcos want enterprises to be excited about 5G, it is developments such as those being developed by Intrinsic that will get the juices flowing at companies planning their next-gen strategies.

The race to be at the heart of Europe’s expected chip production boom is heating up as Taiwan Semiconductor Manufacturing Co. (TSMC) has been linked to a potential factory investment in Germany, though the company has told Reuters it’s still too early to say what the company’s plans in the region will be, reports Benzinga. Intel is, of course, looking to be the king pin in Europe… (See Intel to invest $20 billion in European chip plants.)

Ericsson has landed a deal to supply cloud native, container-based dual-mode 5G Standalone Core on cloud infrastructure to UK operator Virgin Media O2. The vendor had been working with O2 on its shift towards a Standalone 5G platform long before the mobile operator closed its merger with cable giant Virgin Media. “Our teams are already working hard to deliver this infrastructure with Ericsson, who have been a trusted 5G partner since we launched 5GNSA in 2019. The benefits of 5G Standalone are significant as we aim to supercharge the UK’s digital economy, and we look forward to rolling it out for our customers in the near future,” noted Jorge Ribeiro, Director of Service Platform Strategy & Engineering at Virgin Media O2. Read more.

Research house Dell’Oro believes the optical transport market will enjoy consistent yearly growth and be worth US$18 billion per annum by 2025, driven primarily by demand for the coherent 400 Gbit/s ZR (400ZR) pluggable optics that are now available on the market and of particular interest to Internet content providers. ZR optics are optimised to provide short-reach point-to-point optical solutions and hub-and-spoke traffic patterns. A new Dell’Oro report notes that interest in using ZR pluggable IPoDWDM architecture is already strong and still growing. IP over DWDM (IPoDWDM) is applied to integrate IP routers and network switches in the optical transport network architecture. Read more.

In Britain, concern about the acquisition by Chinese-owned Nexperia of the UK’s biggest silicon chip manufacturing plant, Newport Wafer Fab in Duffryn, Wales, is growing. The latest to voice disquiet is Ciaran Martin, who was the first CEO of the National Cyber Security Centre (NCSC) from before it went operational in 2016 and on through until August 2020. He believes the sale of such a strategic UK asset as Newport Wafer Fab to a company ultimately owned by the Chinese is much more of a threat to Britain than was Huawei’s presence and reach in the nation’s 5G network because “the future of semiconductor supply is a first order strategic issue. It goes to the heart of how we should be dealing with China.” Ciaran Martin was head of the NCSC when it concluded that Huawei’s involvement in 5G in the UK was a very real threat to national security. That assessment resulted in the ongoing removal of Huawei equipment from the UK’s telecoms networks. The sale has been described by a former leader of the Conservative Party as an “unholy mess” and was condemned by the influential Commons Foreign Affairs Committee. It said that Britain’s “sovereignty should not be for sale” and called on the government to step in and stop strategically important companies and assets being sold to foreign buyers. In light of this and other complaints, including parliamentary demands that the purchase should be blocked under the terms of the UK’s new National Security and Investment Act, the Prime Minister, Boris Johnson, has intervened and instructed the National Security Adviser, Sir Stephen Lovegrove, to review the buyout and report back with “appropriate mitigation measures.”

Hong Kong operator PCCW has sold its data centre unit to DigitalBridge for $750 million. In a statement to investors, PCCW said the sales would enable it to “focus on technology, IP development and services. Carrier neutral colocation services is a distinct business from our HKT, Media and Solutions businesses. The proposed divestiture of the Data Center Business will allow the Company to better focus and strengthen its core service and product offerings and create more value for its customers and shareholders.” The operator had been rumoured to be flogging various assets, including its data centres and IT services unit, for some months.

Would you be averse to a Facebook metaverse? If you are one of the many who find the current two-dimension Facebook more than a tad “de trop” just wait until it goes 3D! The latest pronouncement from Mark Zuckerberg is that he wants the social media network to transmute into an all-encompassing “metaverse” within the next five years. For ‘metaverse’ read a three-dimensional Internet where people can work, play, communicate and spend much of their daily life in a pervasive virtual environment - provided they have a VR headset more or less permanently strapped to their heads. Zuckerberg says his metaverse will be “an embodied internet where instead of just viewing content - you are in it”, while, of course, Facebook controls it all, privacy is further eroded and the company makes even more money from personal data. Facebook’s market capitalisation is now well over 1 TRILLION dollars, but another trillion would always be welcome. What’s more, in the midst of the Covid-driven debate about the ‘always on’ society and the blurring of the distinction between work time and private time, Facebook is also looking at providing the workforce with an “infinite office” which it defines as an “ideal workplace” courtesy of VR. Zuckerberg enthuses, “In the future you’ll be able to sit as a hologram on my couch, or I’ll be able to sit as a hologram on your couch, and it’ll actually feel like we’re in the same place, even if we’re in different states or hundreds of miles apart. I think that is really powerful.” Well, he would, wouldn’t he? Others might say, “Who the hell are you, why have you materialised in my bathroom and why are you sitting on my knee?” Turning to mobile phones, Mr. Zuckerberg opined that humanity should not live through “small, glowing rectangles”. He should know. Speaking in a podcast interview with The Verge, he added, “That’s not really how people are made to interact. A lot of the meetings that we have today, you’re looking at a grid of faces on a screen. That’s not how we process things either.” Really? Most people are pretty good at it. Back in 2014 Facebook spent a couple of billion dollars out of petty cash on buying virtual reality pioneer Oculus. That investment is yet to pay off. In a masterly understatement Zuckerberg now admits that today’s VR headsets are “a bit clunky” and need to be improved if people are going to wear them all day. Meanwhile, calls to break-up, properly regulate and police Big Tech are getting louder and more insistent. One can understand why.

After the chip shortage… an insufficiency of batteries. While industries the world over struggle to cope with the lack of the silicon chips that power the huge array of devices that people and businesses now use and need to keep themselves going, business analysts are beginning to look beyond immediate and short-term semiconductor shortages. The balance of opinion is that the next crunch will be in battery supply. What’s more, it could last for several years and cause severe economic problems as supply continually lags behind demand. Take the electric vehicle (EV) sector as an example: demand for non-polluting cars, buses and trucks is on the up-and-up-and-up while the production of combustion-engined vehicles begins to decline as governments set deadlines to cut the production of traditionally-powered cars to help achieve reduced-carbon emissions and other climate-change targets. EVs need batteries but securing the raw materials to manufacture fuel cells is becoming increasingly difficult just at the time production should be ramping up. The availability of key elements for the manufacture of modern batteries, including lithium carbonate, cobalt sulphate, copper and other raw materials, has risen markedly through the year to date. In 2019 and 2020, the price of lithium-ion batteries was quickly falling - but guess what? Yup, as they become more popular and mainstream the cost of buying EVs will rise as the price of petrol- and diesel-powered vehicles fall. The forecast is that the supply-crunch could last until at least 2023 or longer, which means some carbon emission targets will be missed as the world’s climate continues to change.

UK telcos have been put on notice by the regulator, Ofcom, that they need to do more to help financially struggling customers… or else. Ofcom may want to intervene directly to force lower prices for those in difficulty. The regulator acknowledges that some telcos have introduced low-cost packages for people on benefits; and right through the pandemic they had won PR brownie points with moves such as making special offers for health service workers. But it points out that while broadband and mobile customers have been consistently getting better services for lower prices on average, people on lower incomes have not been enjoying similar gains, despite the introduction of low-cost, targeted tariffs. The main problem is that many on low incomes don’t apply for and take up the low cost offers for a range of reasons, including poor or non-existent promotion. Ofcom warns that if the industry does not take sufficient action to address its concerns, “we think there would be a strong case for exploring whether mandatory social tariffs would be necessary.”  Read the Ofcom communication and research results...

Lumen Technologies has expanded its fibre network infrastructure in Europe, strengthening its service capabilities in France, Switzerland and Spain. In France and Switzerland, Lumen has constructed a new route of more than 180 miles between Lyon, France and Geneva, Switzerland, connecting three new cities, Grenoble, Chambéry and Annecy.  In Spain it completed its national fibre ring by adding a new segment of more than 170 route miles between the city of Salou and the French border; and it built a new metro network in Barcelona and connected to the MAREA trans-Atlantic subsea cable. Read more...

Bain Capital Private Equity and Crosspoint Capital Partners have completed their acquisition of cloud-native network detection and response specialist, ExtraHop, for $900 million. The company says software supply chain attacks and the rise of double-extortion ransomware means organizations are actively looking for new ways to reclaim the upper hand. According to Arif Kareem, CEO of ExtraHop, the company is uniquely positioned to help customers defend against these new and emerging attack vectors. Read more...