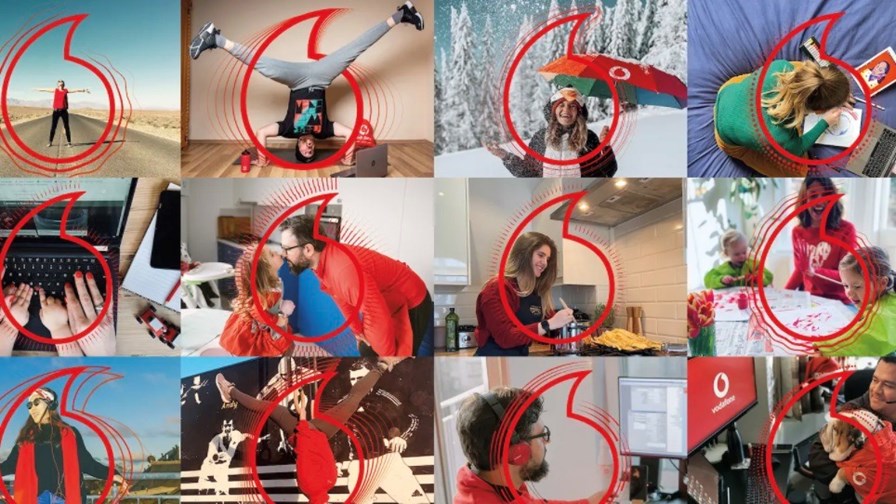 Vodafone said it plans to do its level best to secure a meaningful share of the billions of euros that are up for grabs courtesy of the EU's post-pandemic recovery fund as it provided an update on its plans and aspirations as well as its performance during the six months to the end of September.

In a first-half financial report that showed encouraging organic revenue growth across most of its operating footprint, the telco said it would use any grant money it gets to advance its designs on the eHealth, smart city, education, green, and digital SME markets.

As part of its €750 billion pandemic recovery plan, the EU has launched its Resilience and Recovery facility, comprised of €360 billion of loans and €312.5 billion in grants. Vodafone noted that around 70 percent of these grants will be allocated to Member States in which it operates, and that 20 percent of the capital is designed to support the EU's digital transformation strategy.

That leaves more than €100 billion potentially available to companies like Vodafone. With that in mind, it is keeping tabs on how that money has been divided among individual countries in its European footprint, the funding split between digital versus green projects, and how much of the money has already been allocated. (See chart below.)

"We have an attractive and relevant suite of products and services designed to access funding opportunities," said Vodafone, in its report. "In order to maximise our access to these opportunities, we have mobilised a dedicated cross-functional team comprising product specialists, business development executives and experienced regulatory affairs professionals."

The EU plans to allocate 70 percent of the Resilience and Recovery facility by the end of 2022, so Voda's crack team of funding applicants are in for a busy 12 months. 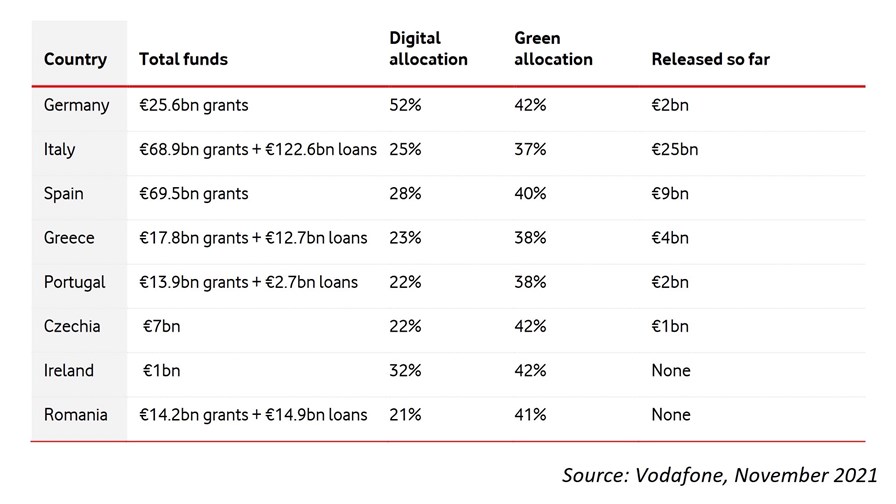 Even without handouts, Vodafone is making steady progress, judging by its financial performance during the past six months.

Group service revenue rose 2.8 percent organically year-on-year to €19 billion, driven by its operations in both Europe and Africa. That led to adjusted EBITDA (aka EBITDAaL) increasing by 6.5 percent to €7.6 billion.

"The results show we have demonstrated good sustainable growth and solid commercial momentum," said Vodafone CEO Nick Read, in a statement. "Our strengthened performance in Africa and Europe puts us on track to be at the top end of our guidance for this year."

That guidance being €15.2-€15.4 billion in adjusted EBITDAaL, and adjusted free cash flow of at least €5.3 billion.

As other telcos with diversified operations have reported, Germany appears to be a good place to do business at the moment. It was certainly a solid performer for Vodafone during its fiscal first half, with service revenue at its mobile and fixed-line divisions growing by 1.5 percent and 0.9 percent respectively. Both the mobile and fixed businesses added customers, and the latter grew ARPU too. (See Nowhere to hide for single-market European telcos.)

"Germany is both the largest connectivity market in Europe and Vodafone's biggest market, representing 38.2 percent of group adjusted EBITDAaL in the first half of FY22," Vodafone said, adding that Germany has benefited from "a more rational competitive environment compared to many other markets in Europe."

Following the acquisition and integration of Unitymedia, Vodafone Germany boasts a gigabit-capable network that passes 23 million homes: Vodafone said this puts it in a strong position to offer converged services, uptake of which is unusually low in Germany.

Spain may be far ahead when it comes to convergence, but stiff competition is hurting the financial side of the business. Service revenue at Vodafone Spain edged down slightly to €1.87 billion from €1.88 billion a year ago, and adjusted EBITDAaL fell to €445 million from €488 million. Vodafone Spain lost 82,000 fixed broadband customers due to intense competition and after it raised its prices. On the mobile side, customers increased, but churn also increased by 3.9 percentage points year-on-year to 20.6 percent.

Vodafone noted that the number of customer-facing brands in Spain has grown from 60 in 2017 to nearly 80 in 2021, resulting in significant price deflation. To counter this, Vodafone has closed a load of retail stores and lobbied for spectrum and tax reforms to make it easier to do business. Going forward, Voda said it will explore strategic network partnerships and in-market consolidation. Similarly Italy is feeling the heat at the moment, as price competition led to a 2.5 percent decline in service revenue.

Elsewhere, the other highlights on Vodafone's income statement included its African arm, Vodacom, which reported a 5.4 percent YoY uptick in service revenue. This was thanks to a combination of subscriber base growth, and continued strong demand for its M-Pesa mobile financial services and IoT services. Vodafone UK also recorded organic service revenue growth at both its mobile and fixed-line businesses.

So, overall, a mixed bag of (mostly) positive results for Vodafone demonstrates that when it comes to maintaining healthy financial momentum, diversity in both services and geography is the name of the game.

At the same time, Vodafone, like other operators, knows that turning a buck is getting increasingly tough in the highly competitive markets in Europe, where many markets still have multiple infrastructure-based rivals. CEO Nick Read had noted over the weekend in a newspaper interview that further market consolidation will be needed, and even floated the idea that a Vodafone/Three combo in the UK should be greeted with open arms by all, and today's trading update confirmed that Vodafone is seeking suitable M&A opportunities. It noted:

"Over the last decade, the performance of the European telecommunications industry has been weaker than other regions, which market commentators largely attribute to its regulatory environment. European regulation has been driving increasingly fragmented market structures compared with North America or Asia. Sustained price deflation and the inability to derive cost synergies from scale have impacted sector returns, which in turn limits the sustainability of capital investment in critical national infrastructure. As noted above, Germany has benefited from a more sustainable competitive environment compared to many other markets in Europe and those markets would benefit from in-market consolidation. We are pragmatically pursuing value accretive in-market consolidation to deliver sustainable market structures in our major European markets."

The regulators can't say they haven't had a heads up...