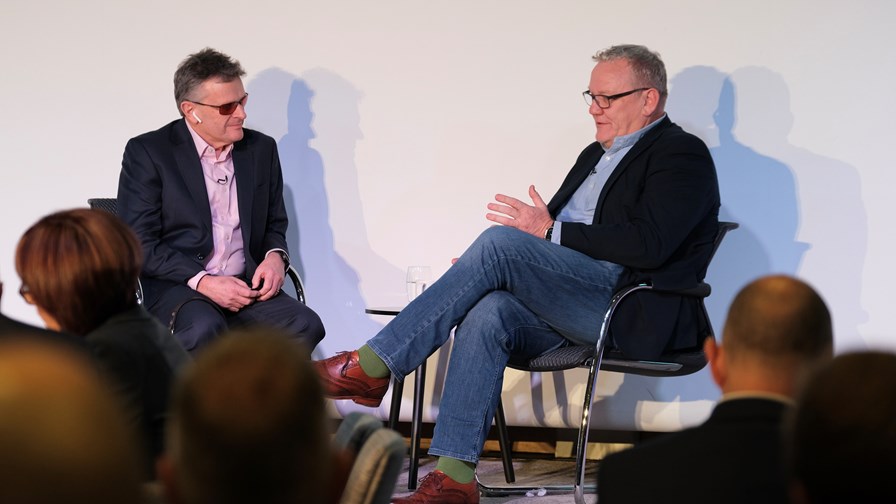 Phil Jordan (right) in conversation with Chris Lewis at The Great Telco Debate 2022.

LONDON – Great Telco Debate – “One thing that will probably depress you a bit is that we don’t talk about telecom all that much,” noted Phil Jordan, group CIO at UK supermarket and retail giant Sainsbury’s, when asked about his view of the telecom sector from the enterprise side of the fence.

Jordan, who has plenty of experience in the telecom sector, shared his enterprise perspective of telecom during an insightful one-to-one conversation with industry analyst Chris Lewis on stage at The Great Telco Debate, where more than 100 executives from the communications networking and services sector had congregated to discuss some of the hottest topics in the industry.

And for Jordan, whose job prior to Sainsbury’s was as the outspoken and high-profile global chief information officer (CIO) at Telefónica, telco services don’t figure much in his plans as he figures out how best to support a business that has more than 600 supermarkets, over 800 convenience stores, and which runs the UK’s third most visited retail site, Argos (after Amazon and eBay).

“Honestly, enterprises are not obsessing about which [wireless] technology to use – not remotely,” he noted, having earlier witnessed a debate session about private 5G and the future of Wi-Fi (which will soon be available to view on demand). “We're interested in outcomes: We’re interested in how quickly we can get someone through a till, how much shopping I can get displayed digitally in a store and how much data I can get delivered to an end point inside my store reliably. Those are all productivity outcomes. We never talk about connectivity outcomes. So you have to partner with [a company that understands a vertical], or understand the vertical well enough, to sell, probably, a solution… to help us deliver outcomes. It’s never about connectivity,” he stated.

Jordan did note that the one time Sainsbury’s did need to think about connectivity was when it had to consider how to enable automation and immersive experiences in store, and those were designed without a thought to the connectivity requirements. “We ended up having to do a complete rebuild of our wireless infrastructure… that's the one time where we've had to sort of pivot and really think about network, but we quickly forget about it again, because it's a commodity,” he explained.

He pointed out some interesting parallels between retail and telecom: “I think both industries are being disintermediated by digital players. And both industries have clear barriers to entry. For telecom, it’s networks, for [supermarkets/retail] it’s stores – for the physical footprint.”

“The biggest difference, I think, is in customer centricity. When I came out of telecom, I thought I used to think about customers, but when you go into retail and you open your doors and every day 30 million people decide they’re going to shop with you, it’s very different. Telcos, I think, treat customers as an abstract concept [the room laughed, somewhat nervously] and I understand why, because telcos are B2C, B2B, wholesale… it’s a complex business model and a lot of the time the customers are an arm’s length away, but in retail there is a touch point every day and you get instant feedback.”

And then there is customer retention.

“We are a big retailer and we also have the biggest loyalty programme in the UK, called Nectar, and we are also a bank, so it’s a very interesting mix. When I look at my time in telcos, we were constantly looking for a way to understand the customer from a multi-product perspective. We never, ever really did it. In retail, it's a little bit easier because you're capturing data and you're leveraging data based on the shopping experience – retail, online or physical. But it really is the glue. It's the most important asset we have… and early next year we'll go fully into personal pricing.”

You can watch the full interview with Jordan here and watch out for the on-demand recordings of The Great Telco Debate sessions that will be made available during the coming days on TelecomTV.