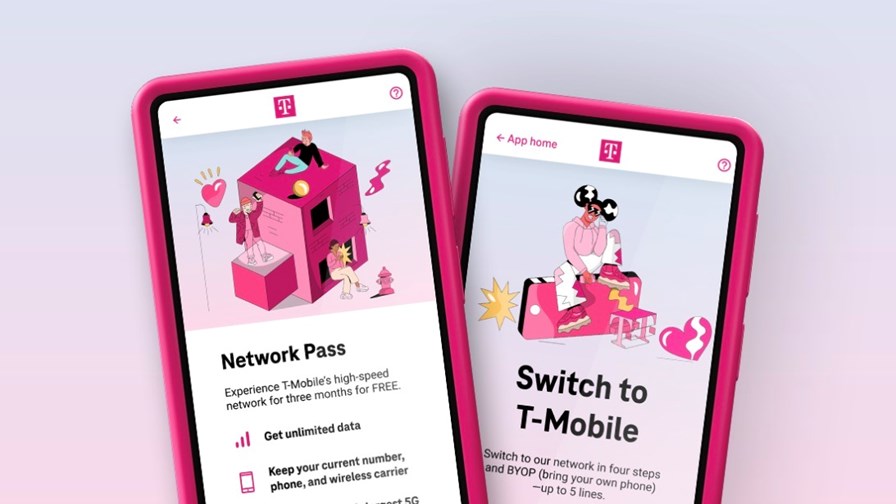 T-Mobile US has thrown its increasingly hefty mobile industry weight behind one of the industry’s most disruptive technologies, embedded SIM (eSIM), and is using it in a novel approach to poach new customers by letting them test its network services for free while it convinces them to abandon their existing supplier and sign up for a T-Mobile US subscription.

As a result of the move, anyone in the US who is not yet a customer will be able to move over to T-Mobile US with an ‘Easy Switch’ feature that has been integrated into its T-Mobile app. The option has been made available to those who have an unlocked eSIM-compatible smartphone – initially this addresses the iOS community but will soon be extended to cover users with Android devices as well.

The operator claimed that switching will take “as little as five minutes”, essentially taking “the process from an hours-long ordeal to a few simple steps that can be done from the comfort of their couch”.

“Switching is another insane artifact left over from a stupid, broken, arrogant industry … and it’s hard on purpose”, suggested outspoken T-Mobile US CEO Mike Sievert, adding that the “the industry juggernauts in the 3G and 4G era”, Verizon and AT&T, have “designed switching to be difficult, keeping their hordes of customers from leaving to protect their billions in revenues”.

According to Sievert, the ‘Un-carrier’ is “laser-focused” on being the provider with which customers will want to stay.

Additionally, a ‘Network Pass’ capability will allow consumers and businesses to use T-Mobile’s unlimited data plan (including 5G) free of charge for three months. They will also be able to compare the network of their current provider to T-Mobile’s through a customised ‘Network Scorecard’.

On the latter, T-Mobile’s president of technology, Neville Ray, explained that while every wireless network has spots where signal fades, what differentiates T-Mobile is that “we’ll actually let you experience the country’s leading 5G network BEFORE you switch. That’s how confident we are in T-Mobile’s network”.

GlobalData principal analyst Tammy Parker commented that traditional telcos have been “worried about the threat posed by eSIM technology” as they could lose advantage to mobile virtual network operators (MVNOs) and smaller service providers, but they can “just as easily use eSIM technology to poach customers from their rivals, especially if they have something to prove”.

While T-Mobile US has experience in offering eSIM-supported network testing, its latest initiative “will be open to many more potential customers with more types of eSIM-enabled phones once the upgraded app is available for Android”, she added.

Another takeaway from the company’s move is turning its regular app into “an acquisition tool as well as a standard retention self-service tool, which is a significant step in the customer digitalisation story”. According to the analyst, this also shows T-Mobile US’s confidence in its 5G network performance.

“Experimenting with eSIM now prepares carriers for an eSIM-only future, as it increasingly appears that device makers such as Apple will shift the industry in that direction. The eSIM concept is new to many US mobile users, so service providers need to take the initiative to educate their customers and potential customers about eSIM sooner rather than later”, Parker recommended.

Emma Mohr-McClune, service director of global telecom consumer services, platforms and devices at GlobalData, concurred, telling TelecomTV that familiarity with eSIM is still “fairly low”, but this can be changed “with a few interesting incentives. The trick to accelerating eSIM adoption will be in the value of that incentive and the customer experience ease with which consumers can be led through the eSIM activation process to get to the reward”.

Mohr-McClune added that T-Mobile has been “pushing the envelope on eSIM test drives” for years, and now its move makes the switching promotion “even more aggressive”.

But what does this mean for its rivals? And will they follow in T-Mobile’s footsteps? According to Mohr-McClune, eventually they might. “But there’s no doubt that T-Mobile US is leading in this space”, she claimed, adding that operators around the world view the Un-carrier as “the innovation leader in terms of eSIM test drive leverage”.

Recently, eSIM, and the next generation of subscriber ID technology, iSIM, were highlighted by BICS as a cornerstone for massive internet of things (IoT) adoption – see How eSIM and iSIM will play a critical role in massive IoT adoption.