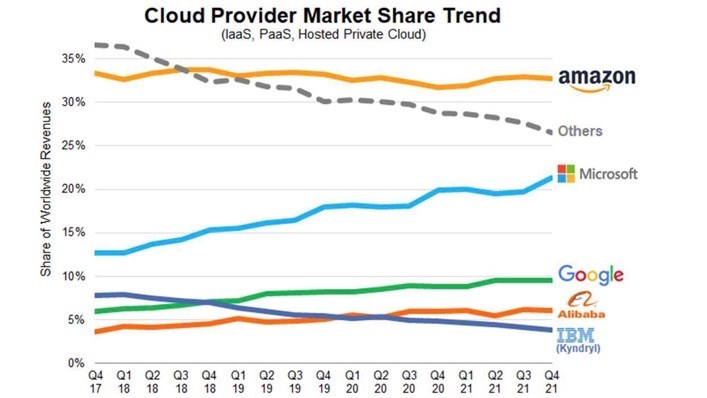 Enterprise spending on cloud infrastructure services surpassed the $50 billion mark in the fourth quarter of 2021, up by 36% year-on-year and giving the market an annualised value of more than $200 billion, with Amazon Web Services still by far the most dominant single player with a 33% market share, according to statistics shared by the team at Synergy Research Group.

But Microsoft is gaining ground: Its market share hit 21% in Q4 2021, up by nine percentage points since the end of 2017, as the chart from Synergy Research (above) shows.

And others are growing their share too, including Google Cloud (10%) and Alibaba (6%), while “the long tail of small-to-medium sized cloud providers see revenues growing steadily but market shares declining,” notes the research firm.

In an email to the media, John Dinsdale, a Chief Analyst at Synergy Research Group, noted: “While Amazon continues to zoom along and still accounts for a third of the worldwide market despite years of tough competition, Microsoft’s growth is truly impressive. It has taken Microsoft 18 quarters to double its market share, which has now passed the 21% mark. Despite a relatively late start, Google too is now accelerating the pace of its cloud activities.”

The services tracked by the research firm include IaaS, PaaS and hosted private cloud services:  Public IaaS and PaaS services “account for the bulk of the market and those grew by 38% in Q4,” noted the firm. “The dominance of the major cloud providers is even more pronounced in public cloud, where the top three control 71% of the market,” it added.

“It is a strong testimony to the value and attractiveness of cloud services that the 2021 market growth rate actually exceeded 2020 growth, despite the enormous scale that has already been achieved. Enterprises are now spending twice as much on cloud services as they spend on their own data centers,” stated Dinsdale.