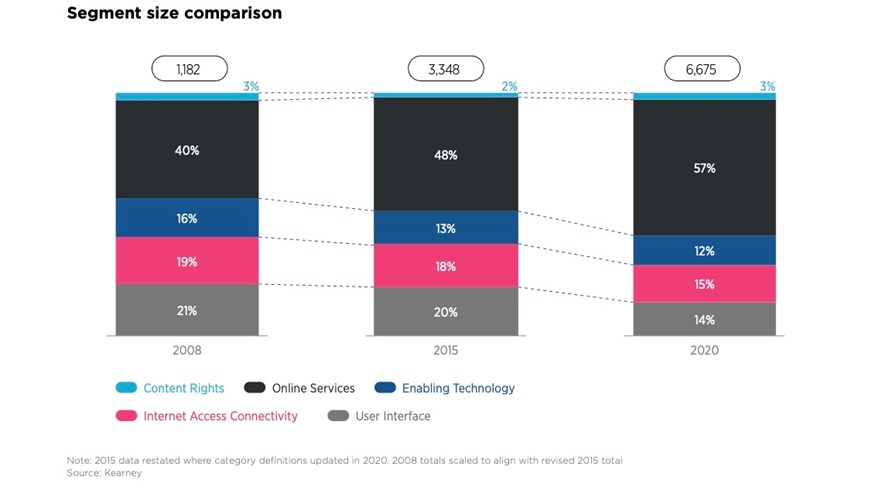 The likes of Meta (FKA Facebook), Google, Netflix and other online hyperscale service providers are making out like bandits from the content they pump across the Internet and huge profits are being realised at the expense of telecoms companies, which are spending enormous sums on providing and enhancing the infrastructure that allows the so-called ‘over-the-top’ companies to play in and exploit the market in the first place, according to the recently-published, 54-page Internet Value Chain Report 2022 from the GSM Association (GSMA), the powerful trade body that represents and lobbies on behalf of many of the world’s mobile network operators.

It’s hardly a new thesis, but the 2022 report reiterates that the current, unbalanced state-of-affairs between operators and online service providers, if not addressed, could soon affect the global growth of the Internet itself. Should that eventuality come to pass, it would be a massive worldwide problem and the GSMA is once more making its case that while the Internet value chain is currently growing at a rate of knots, the benefits of that growth are accruing primarily within the online services sector, while those providing the technologies that underpin the delivery of such services are not getting returns and profits at the rate they deserve.

In 2020, the global Internet had 4.6 billion users, equivalent to 59 per cent of the population of the planet. While great swathes of the world still do not have basic connectivity, let alone broadband, the Internet has quickly become the most important globe-spanning economic system in history. In 2020, the revenues generated by the segments that comprise the Internet value chain totalled US$6.7 trillion, more than double the $3.3 trillion recorded in 2015.

The most pronounced growth over that five-year period was in content rights at 23 per cent per annum - from an admittedly low starting base. The next biggest sector was online services, which grew by 19 per cent over the same period and, as of today, the two sectors account for 57 per of the entire value chain in terms of revenues. Meanwhile, the enabling technology segment grew at 13 per cent and Internet access connectivity and user interface areas grew, respectively by 11 per cent and six per cent.

The massive increase in online services between 2015 and 2020 was down to several factors, the most notable being consumers in their millions embracing online entertainment, including video streaming and gaming. The ever-increasing popularity of social media platforms and services and search apps also played a major role, as did the popular ubiquity of gig-economy services and applications.

Where the enterprise market is concerned, the global shift from on-premises IT to cloud-based services was a game-changer, while the entertainment services had an important impact on content rights revenues. Gaming content had a similar effect.

Technologies designed to enable advanced services grew. These included the emergence of hyperscale infrastructure services that permitted more and more services to migrate online. The growth of payment gateways to support the burgeoning volume of internet transaction also has a profound effect.

Internet access connectivity revenues have increased by 11 per cent per annum since 2015 as more devices and individuals were connected. However, as the GSMA report points out, all that growth was “a substitution for previously offline or private network services (voice, MPLS and VPN services etc.)”.

1) The biggest players are determinedly expanding their presence across it by launching new online services and using the sheer scale of their presence and clout in existing customer bases to elbow their way into new segments whilst integrating along the value chain, acquiring contest rights companies and enabling technologies and investing heavily in end-user devices.

2) Most online services are paid-for rather than funded by advertising or sponsorship, and growth in advertising revenues still centres on search and social media services and advertising-funded video services.

3) The trend to online continues unabated and has been reinforced by the digitalisation of government, municipal and enterprise as the migration from siloed, standalone, on-premises IT stacks across to the cloud continues and innovative applications such as software-as-a-service (SaaS) become increasingly popular.

An understandable claim to an overdue fairer division of the spoils

The GSMA report shows that, overall, the Internet value chain “continues to grow at a steady 15 per cent per year and shows no sign of slowing down.” What’s more, there is no shortage of developments, innovation and expansion into new areas of technology that will “enable, and also drive, the continued shift of activities that used to be offline into an online format.” It adds, “As innovation moves into entirely new segments and platforms, most notably metaverse-type developments, future developments may be less about the next big service, and rather about the emergence of entirely new, parallel ecosystems.”

However, the GSMA report tellingly concludes, “As these new revenue opportunities open-up across the value chain, the telecom operators building and running the underlying and enabling infrastructure are not necessarily benefitting as much as one might expect. Despite the growth across the overall value chain since 2015, the return on capital employed of the telecom operators, which were already below ten per cent, have declined further. The returns to their shareholders have been equally low, raising questions about the ongoing robustness of investment in capacity, coverage and speed of the networks that connect internet users with services.”

It ends with a plea: “Business leaders and policymakers need to fully appreciate the critical role of the Internet infrastructure and work to ensure that market distortions, regulatory requirements or other factors are not limiting the ability of participants to make sufficient returns in all segments of the ecosystem and that all segments can make a fair return. This would sustain long-term investment, and not just those businesses that have the biggest platforms and scale. The telecom operators have an important role to play and need the right incentives to keep investing in networks, both in core network capacity and increasingly in edge functionality. It is in the interest of the entire ecosystem that robust investment continues in the networks required to realise the full technological potential of future Internet innovations.”