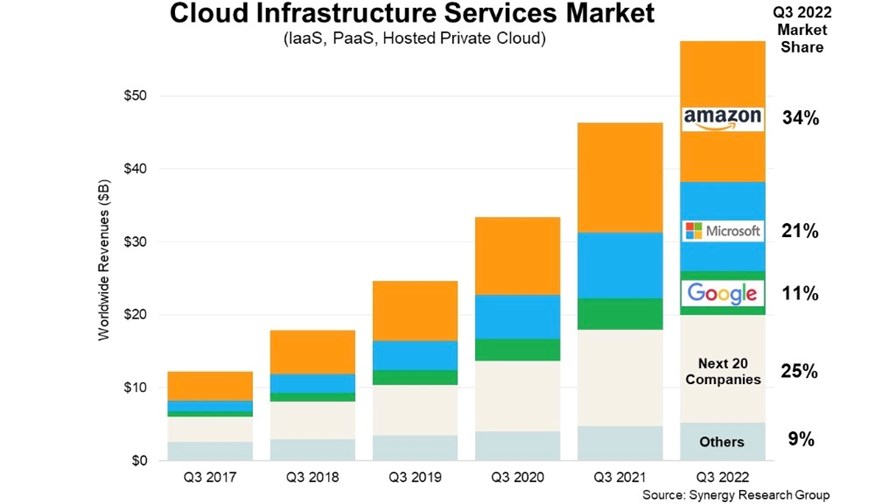 The global market for enterprise cloud infrastructure services was worth US$57.5bn during the third quarter of 2022, according to the team at Synergy Research, more than double its value during the third quarter of 2019 – an astonishing increase in just three years. Amazon Web Services (AWS) is still the largest single player by far with a market share of 34%, but it’s notable that, unlike the two clear market leaders, AWS and Microsoft Azure, Google Cloud is managing to gain market share quarter on quarter in a sector that’s on course to be worth more than $220bn this calendar year.

With the main players having revealed their third-quarter financials, the Synergy Research team is able to pick out the latest trends in the market, which comprises infrastructure-as-a-service (IaaS), platform-as-a-service (PaaS) and hosted private cloud services. The $57.5bn market value is $11bn, or 24%, higher than in the same period a year ago, and would have been higher if exchange rate fluctuations had not dampened the value of the sector when converted into US dollars. At constant currency exchange rates, the year-on-year growth rate would have been higher than 30%, more in line with recent levels of growth.

“It is a strong testament to the benefits of cloud computing that, despite two major obstacles to growth, the worldwide market still expanded by 24% from last year,” noted John Dinsdale, a chief analyst at Synergy Research Group. “Had exchange rates remained stable and had the Chinese market remained on a more normal path, then the growth rate percentage would have been well into the thirties: The three leading cloud providers all report their financials in US dollars so their growth rates are all beaten down by the historic strength of their home currency,” added Dinsdale.

In China, cloud services market growth has been affected by Covid-19 lockdowns. “After the US, China is the biggest cloud market in the world and was historically reporting the highest cloud growth rates among all of the major countries,” noted Dinsdale in an email to industry reporters. “But the Chinese market has now been beaten down by Covid-19, national policies, and a worsening geo-political situation, and now has one of the lowest cloud growth rates among the major countries. Things will change,” added the chief analyst.

Even with such trends, the market looks on course to be worth more than $220bn in calendar year 2022: The first three quarters have seen aggregate sales of just over $165bn and at current rates of growth, fourth-quarter global cloud infrastructure services revenues are on course to be worth close to $60bn. (Note: This is TelecomTV’s back-of-the-envelope calculation and not a Synergy Research forecast.)

But back to the reported numbers… AWS (with its 34% market share) is still far and away the single largest player in the sector, followed by Microsoft Azure (21%) then Google Cloud (11%), the only one among the top three to have increased its market share compared with the previous (second) quarter.

Google Cloud this week reported third-quarter revenues of almost $6.9bn, up by nearly 38% year on year, and continues to bulk up its business. In September, it closed the acquisition of cyber defence, threat intelligence and incident response services specialist Mandiant, which the hyperscaler believes will enhance its security offerings (and demand for security services is growing, of course, as enterprise users face an increasing barrage of cybersecurity threats and challenges). The acquisition was first announced in March this year.

The scale of the top-three players means they have a very firm grip on the global market, commanding 66% of the total market, up from a combined 61% a year ago. While the smaller players have grown their cloud services businesses in terms of revenues, that growth is slower than the growth recorded by the overall sector, so they are losing market share: The cloud services players beyond the top three boasted a combined market share of 50% in late 2017 but that has now dropped by 34%.

Of those smaller players, China’s Alibaba held a 5% share of the global market in the third quarter, IBM and Salesforce each had 3% and both Tencent and Oracle had 2%. Other smaller players include Baidu, NTT, SAP and Rackspace.

Dinsdale has previously suggested how these smaller companies can grow their share of the overall global cloud services sector before, and he’s said it again: “The key for these companies is to focus on specific portions of the market where they can outperform the big three.” Now they just need to find their niche and execute.