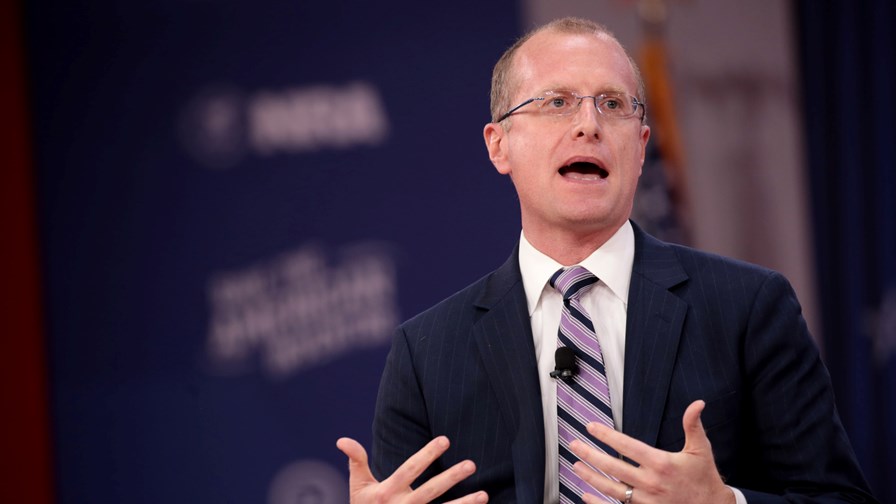 Here’s yet another sign of changing times and the growing antipathy, on both sides of the US political divide, to “out-of-control Big Tech” as exemplified by the antics of Facebook, Google and their ilk. In Washington DC, Brendan Carr, the senior Republican Commissioner on the Board of the US regulator, the Federal Communications Commission (FCC), says the best way to pay for the agency’s Universal Service Fund advanced communications subsidies is to send the bill to Big Tech.

A new study by two eminent US economists, Hal Singer and Ted Tatos, examined in detail whether big technology and social media companies should now be required to contribute to the FCC’s US$9 billion-a-year programme of telecoms subsidies and fees to help bridge America’s still yawning digital divide. Carr is in no doubt that they should - and he’s far from being alone.

Mr. Carr, a former General Counsel at the agency, says the old USF is well past its sell-by date and is losing its relevance as traditional fixed line telecoms services wither away. He also dismisses a mooted USF model based on the availability of wireless broadband. He believes it to be a retrograde move given that DSPs and CSPs routinely pass their USF fee payments on to subscribers in their monthly phone and Internet usage bills. Thus, he says, it is high time Big Tech companies to start to pay their dues and use some of their immense profits for the good of the public.

Interviewed on Fox Business TV, Carr said, “For too long, Big Tech has been enjoying a free ride on our Internet infrastructure. The current funding mechanism for the Universal Service Fund, a regressive charge placed on consumers’ monthly bills for traditional telephone service is unfair and unsustainable. Rather than artificially raising the cost of Internet service for Americans, assessing Big Tech would sharply reduce consumers’ monthly costs.”

The FCC was established under the terms of the US Communications Act of 1934. That same Act introduced the legal principle that all American citizens should have access to telecoms services guaranteed via a Universal Service Fund under the aegis of the FCC. The 1934 Act remained in place for 62 years until the Telecommunications Act of 1996 redefined the concept of Universal Service and today the FCC defines high-speed Internet as the essential comms technology of the 21st century and now works to make broadband ubiquitous across the entire nation.

Currently, the USF is paid for by payments made by telecoms carriers (wireline and wireless) and interconnected VoIP providers including cable companies that provide voice services. Assessment of the sums due are based on interstate and trans-continental end-user revenues. The money is collected by the Universal Service Administrative Company (USAC) under the direction of the FCC. The FCC itself monitors USF contributions and disbursements.

A Commissioner red in tooth and claw

In his interview with Fox Business, Carr abandoned diplomatic politesse to rip, tooth and claw, into Big Tech in a way that few other Republicans have done before. He said the intransigence and arrogance of Facebook et al and “the smokescreen of self-regulation, by social media companies in particular,” has engendered a rare bi-partizan determination to bring them to heel. “They [Big Tech companies] have relied on partizan divisions in Congress to keep growing and making even more money because they think they [Congress] will never get enough votes together to act in bi-partizan accord.” They are about to find out that things have changed.

Carr continued, “At same time Facebook/Instagram had studies showing the harms caused by decisions it makes, Zuckerburg went before Congress and said the research - that the FCC has seen - shows the positive mental health effects of social media applications. Well, there’s probably a group of old “Big Tobacco” lobbyists out there somewhere looking at each other and saying, 'Man, even we were never that brazen.'”

Asked about the mechanisms to be used to curb the power of Big Tech, Carr said: “The problem is the huge gap between the power and control that they have combined with an absence of responsibility. The need is for a comprehensive framework to ensure more transparency, more accountability… and the imposition of some basic anti-discrimination rules and more user empowerment so individuals are in charge not the social media companies. On top of that there is a huge degree of manipulation without transparency. They need to tell people how their algorithms operate.”

He added, “It’s also time to stop giving massive data centre tax breaks. In some states, such as Georgia and Ohio, tax breaks can top $4 million per job created. Is that value for money?” The answer, obviously, is “No”.

Another aspect of the behaviour of Big Tech giving regulatory agencies concern is the endless cycle of mergers and acquisitions that ensures they keep growing and growing whilst simultaneously bolstering their de facto monopoly positions by neutralising potential competitors. US M&A regulations are complex and that suits Silicon Valley. While major takeovers do get a lot of attention from regulators and the media, the huge number of smaller buyouts slip by unnoticed.

Just look at the scope and scale of the problem: the Federal Trade Commission is the independent agency with responsibility to enforcement of civil antitrust law in the US and also promote consumer protection. It requires companies to report every acquisition worth more than $92 million. Newly published figures show that between 2010 and 2019 Amazon, Apple, Facebook, Google and Microsoft, between them bought 616 acquisitions that fell below the reporting threshold. There could be a lot more because the Big Tech are under no legal obligation to disclose them whilst NDAs (Non-Disclosure Agreements) that are codicils to many a quiet, private buyout, keep the selling companies and their owners anonymous. What’s more, even when an acquisition is worth more than $92 million, the buyer and seller can petition the FTC to keep the deal a secret.

That’s how the big companies quietly take down start-ups whilst simultaneously getting their hands on ever more patent portfolios and key technologists without much or indeed any scrutiny by the over-worked and under-staffed FTC and other antitrust bodies. It is prima facie evidence that antitrust laws are as outdated as the current USF and must be repealed and replaced.

Google’s market capitalisation is $1.4 trillion, so a $92 million acquisition is less than a miniscule dot on its books. Indeed, a billion-dollar buyout would constitute less that 0.1 per cent of Google’s cash pile. One of the primary responsibilities of the US Securities and Exchange Commission (SEC), is to enforce the laws that are supposed to prevent market manipulation but all it can do with Big Tech is to invoke the requirement that Google and the rest must disclose acquisitions that “represent as significant amount” of a purchasing company’s revenue or total market capitalisation. The trouble is that the SEC has no power to impose specific percentage figures to determine said amount, so the whole exercise is pointless.

No wonder that bi-partizan pressure is building to scrap old laws and introduce new ones that will have real application to Big Tech, and real teeth to sink into them if they seek to get round them.