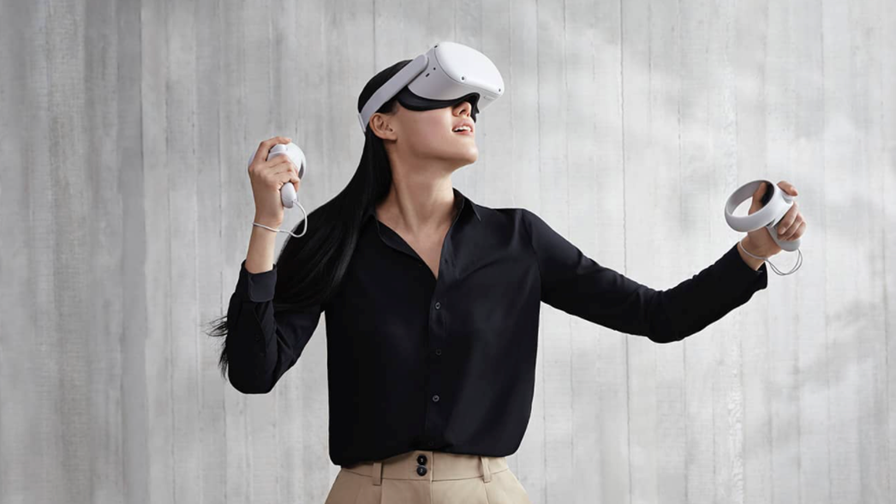 Never backwards in coming forwards where there's a few extra bucks to be made to add to the many billions it already has, Facebook is branching out and has started placing advertising in virtual reality games that play on the US$499 Quest VR headsets provided by its Oculus division. Facebook says that it's only a temporary testing of the new technology, but who would be willing to bet that won't become permanent once the ad revenues start rolling in? Quite what users think about having ads popping up and distracting them when they are playing immersive games on their wireless VR headsets isn't yet known, but the reaction is unlikely to be favourable.
The test ads will be static, like advertising posters, and show primarily in/on Blaston, a shoot'em up/duelling offering from Revolution Games, but Facebook says a couple of other, as yet unnamed VR games companies will also trial the ad placement technology. It is expected that games companies will be only to happy to run the ads because Facebook will pay them an as yet undisclosed share of the ad revenues generated.
Again, what users think to that is yet to become apparent. One thing's for sure though, a player wearing a VR headset and immersed in a game is a sitting, or, more likely, a standing and twisting around and jumping up and down duck when it comes to targeted advertising. Whether playing singly or in groups, consumers will be very much a captive audience that can be measured, sliced and diced to an advertiser's requirements.
Facebook says that ad money will allow it to recoup some of the investments it makes in VR R&D. The Oculus headsets are comparatively inexpensive, priced at a level that attracts consumers and encourages purchases. That nice young(ish) Mr. Zuckerberg says VR and AR (augmented reality) devices will be the biggest thing after mobile phones and will, in due course, take the place of some social interactions that currently can only be effected between real people in real settings. As Pops Armstrong sang, "It's a wonderful world."
The printed ad puffery for the Blaston game reads, "In this slow motion bullet-hell, you duck, dodge and weave to evade incoming attacks while preparing your dazzling next combos in a flash of skill. You feel like Neo and leave each session with your heart racing - super fun tactical workout". Players can slug out out in real-time from more or less anywhere on earth, can "collect weapons of increasing depth" and "balance" their weapons’ "spawn time and their role." So now you know. Facebook adds that it will expand and amend the system according to user feedback comments. That should make for an entertaining read.

There's no escape, even in escapism

Facebook is the first company to beam ads into a VR platform, but it won't be the last. Apple is working on something similar and other will soon jump on the bandwagon. In a blog post Facebook announced, "Once we see how this test goes and incorporate feedback from developers and the community, we’ll provide more details on when ads may become more broadly available across the Oculus platform and in the Oculus mobile app."
Anticipating consumer mistrust of and opposition to ads arriving in a paid-for, privately-owned VR game playing on a paid-for, privately-owned VR headset ,Facebook says it "has no plans" to beam advertising according to the tracking of movement or voice command data and will not change the ways in which it collects, manipulates and analyses player information. But, as we all know all too well, plans can change and they often do.
The company also says users will be able to block specific posts or companies from appearing in ad slots. However, the system ​will exploit information from an individual's Facebook profile and also data related to "whether you’ve viewed content, installed, activated, or subscribed to a Oculus app, added an app to your cart or wish list, if you’ve initiated checkout or purchased an app on the Oculus platform, and lastly, whether you’ve viewed, hovered, saved, or clicked on an ad within a third-party app."
Facebook also says. "We’re currently investing in unobtrusive ads as a new way for developers to build businesses - and though we’re not quite ready to test them yet, we’re also exploring new ad formats that are unique to VR." Even when you are running away from a virtual assassin or blowing up enemy fortifications there will be no escape from the ad man and his relentless determination to sell you something else you probably neither need nor want.
Facebook's department of weasel words id clever at disguising what is really going on. Thus there are 'currently' no plans to use VR tracking data, (images, height, weight, gender etc.) or to "set physical boundaries" in the serving of ads, but the intent is for the advertising to be "high-quality and relevant". In other words data from other sources, such as buying history and app usage will be applied and added to the ever-growing mass of an data collected via an individual's Facebook account.
Also, and as usual, Facebook is happy always to tell consumers about exactly what data it isn't using for ads but is incredibly reluctant explicitly to tell them what it is using. What should happen is that any in-game advertising should only be placed in free applications where the trade-off between access and ads are well understood by consumers. Also, advertising should never be there by default in a paid-for game. And last, but by no means least, users should have the legal right to turn off ads, permanently.