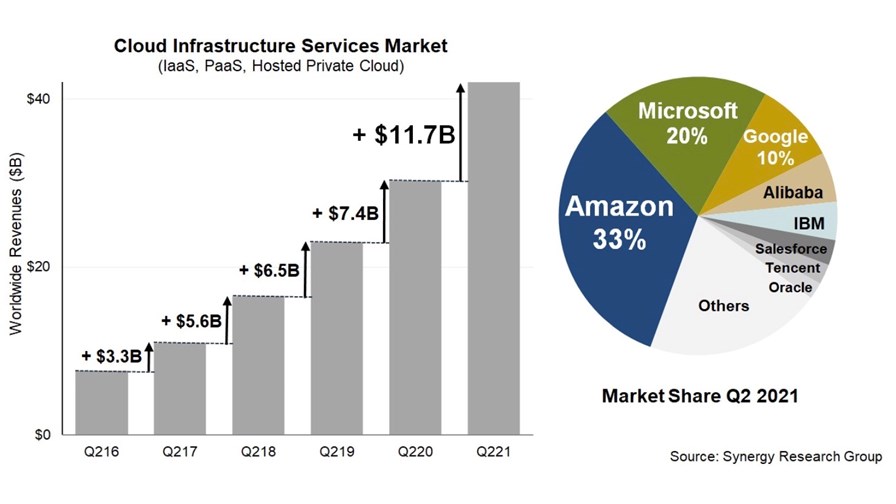 It will come as no surprise to anyone that the global market for cloud infrastructure services has continued to grow at a furious pace and was, according to the team at Synergy Research, worth an estimated $42 billion during the three months to the end of June 2021 – that’s up by 39% from a year earlier and up by 6.3% from the first quarter of the year when the sector was worth $39.5 billion.

Microsoft Azure and Google Cloud had been eating away at the market share of Amazon Web Services (AWS) during the early part of the year, but AWS had a strong second quarter of the year, growing its business by 10% quarter-on-quarter to $14.8 billion, which pushed its market share to 33% (see graphic above). Together, AWS, Azure and Google Cloud command 63% of the total market.

AWS provided its financial update late Thursday as part of Amazon’s second quarter earnings report, allowing the Synergy Research team to get a good idea of the shape of the whole sector (Microsoft and Google provided their updates earlier this week): It believes the global market for cloud infrastructure services (including IaaS, PaaS and hosted private cloud services) was worth $42 billion, taking the value of the market in the 12 months to the end of June 2021 to $152 billion. Public IaaS and PaaS services account for a majority of the total market, and the big three market leaders are even more dominant here, accounting for 80% of the total market, reckons the Synergy Research team.

“This market continues to be a runaway success story for Amazon, Microsoft, Google and some other cloud providers. You would not normally expect to see growth rates actually increasing in such a huge and rapidly developing market, yet once again that is what our research has shown,” noted John Dinsdale, a Chief Analyst at Synergy Research Group. “It must be said that this success is hard earned. Amazon, Microsoft and Google in aggregate are typically investing over $25 billion in capex per quarter, much of which is going towards building and equipping their fleet of over 340 hyperscale data centers. There remains a wealth of opportunity for smaller, more focused cloud providers, but it can be hard to look away from the eye-popping numbers coming out of the big three,” he added in this press release.