What’s up with… Microsoft, TIM, KPN 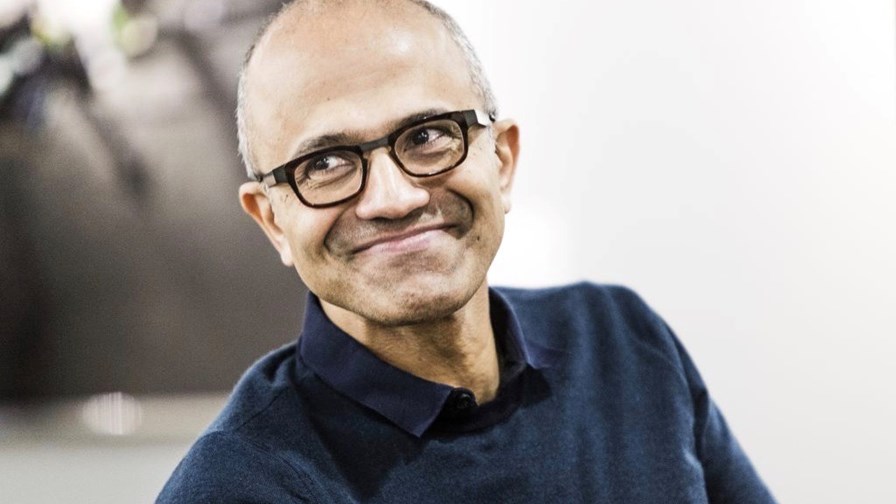 It’s a numbers day in the telecoms sector news roundup, with Microsoft in particular unveiling some pretty staggering financials.

Microsoft crushed its numbers in the second quarter of this year, fuelled by its cloud-related operations, including Azure. The tech giant reported a 21% year-on-year increase in revenues to $46.2 billion, while operating income grew by 42% to $19.1 billion. Microsoft noted that its Intelligent Cloud business increased revenues by 30% to $17.4 billion and that Azure’s sales growth was 51%. “We are innovating across the technology stack to help organizations drive new levels of tech intensity across their business,” said chairman and CEO Satya Nadella (pictured above, and no wonder he's smiling). “Our results show that when we execute well and meet customers’ needs in differentiated ways in large and growing markets, we generate growth, as we’ve seen in our commercial cloud – and in new franchises we’ve built, including gaming, security, and LinkedIn, all of which surpassed $10 billion in annual revenue over the past three years.” Read more.

TIM (Telecom Italia) is still having a tough time, despite its upbeat report of a slight increase in group revenues of 0.1% to €7.6 billion. The Italian national operator is bullish in all its reports about the potential upside of its new content deal with DAZN for top-flight Italian football rights, but its earnings are lower and its mobile customer base is still on the slide in its home market (now down to 19.3 million from almost 20.2 million a year ago). But at least it is chipping away at its debt pile, which was a big concern a few years ago: It now stands at €22.1 billion, down by €3.9 billion from a year ago. For the full details, see this announcement.

KPN is showing signs of stability in its financial results as well as making great progress on its broadband-focused network strategy. The Dutch national operator reported a slight year-on-year increase in second quarter revenues to €1.296 billion, helped by its first growth in consumer mobile sales since early 2017, and a slight increase in its margins. But most importantly it is securing its role as a key provider of high-speed connectivity in The Netherlands with its fibre broadband investments, as CEO Joost Farwerck pointed out: “We are building a fiber company and we’re installing fiber at a record pace. During the quarter we’ve passed the milestone of three million fiber connections. Today, almost half of all Dutch households have a fiber connection; the vast majority via KPN. Thanks to the Glaspoort JV, which is now operational, we will be able to further accelerate our ambition and commit to jointly covering approximately 80% of the Netherlands with fiber by the end of 2026.” Glaspoort, KPN’s joint venture with investment firm APG, plans to invest €1 billion during the next five years, aiming to reach 750,000 households and 225,000 businesses in harder-to-reach areas with fibre connections. For more on KPN’s second quarter progress, see this earnings announcement.

Microsoft wasn’t the only tech giant to unveil some monster numbers: Google’s parent Alphabet also cranked out some massive growth figures, reporting overall revenues growth of 62% to $61.88 billion, while its net profit more than doubled to $18.5 billion. In amongst the details, Google Cloud reported a leap in revenues of more than 50% to $4.63 billion. See this report for further details.

UK Power Networks, the largest electricity distributor in Britain, delivering power to 8 million homes across London, the South-East, and East of England, has teamed up with Vodafone to apply 5G mobile into its operations with the aim of increasing efficiency, cutting costs, and reducing the carbon footprint of the energy supply chain.

Still with Vodafone… Anne Sheehan has jumped ship from Vodafone Business UK, where she was Director, to take on the role of general manager at Microsoft Ireland, reports Silicon Republic.

It was probably only a matter of time before working from home became a Political left/right wedge issue in the UK. The first sign was at the end of the first lockdown (or was it the second?  - hard to keep track) when the government attempted to call time on working from home because it suddenly realised that a large chunk of the economy was dependent on continued sandwich munching at lunchtime and restaurant spending in the evenings. By that time the conservatives had become vaguely uncomfortable with the ‘work from home’ concept partly, because some suspected workforce malingering - never mind that they had encouraged the move to stay home in the first place. It didn’t go well. Now the left/right gauntlet appears to have been picked up by the opposition Labour party which, far from wanting a return to ‘normal’ says it wants to see important aspects of employment flexibility, as practised during the pandemic, maintained and extended in new legislation. Labour‘s Angela Rayner who rejoices under her full title ‘Shadow Chancellor of the Duchy of Lancaster and Shadow Secretary of State for the Future of Work since 2021 and Shadow First Secretary of State, Deputy Leader of the Opposition and Deputy Leader of the Labour Party since 2020’, wants to make flexible working the default – including working from home. According to the Guardian newspaper she said that  Labour would widen the definition of flexible working and give employers a legal responsibility to accommodate it. “Labour will make flexible working a force for good so that everyone is able to enjoy [its] benefits…   from a better work-life balance to less time commuting and more time with their families,” Rayner said.