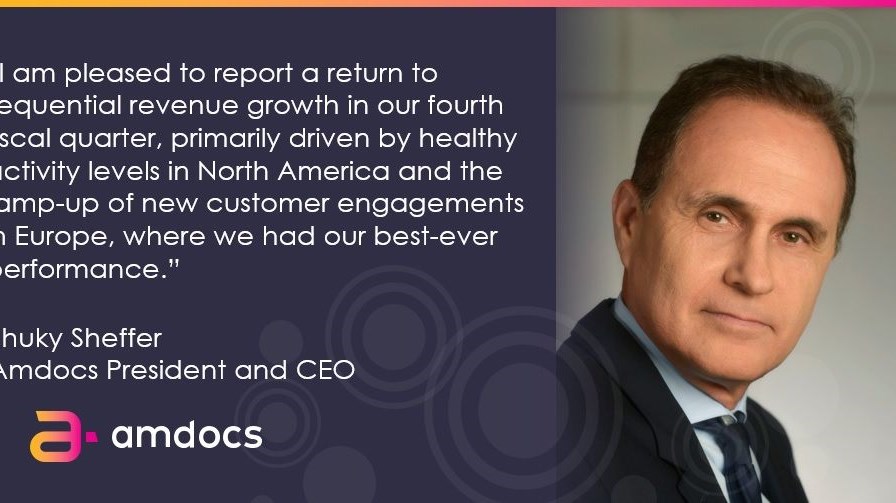 As the telecoms industry becomes ever more software- and cloud-oriented, Amdocs is thriving. The long-time telecom software giant has just reported its highest ever quarterly revenues, has a very healthy pipeline of business, continues to evolve its business through strategic M&A deals, and has brokered an alliance with a key public cloud platform giant.

Its fiscal fourth quarter revenues of $1.053 billion (for the three months ending 30 September) were 2.2% better than the same period last year, while the vendor’s full fiscal year’s sales hit $4.2 billion, up by 2%. The vendor said its Q4 sales were bolstered by “healthy activity levels” in North America and the company’s “best-ever performance” in Europe.

And, of course, Amdocs is profitable, with operating income of almost $147 million in the fourth quarter and almost $595 million for the full fiscal year.

“Our ability to generate modest revenue and earnings growth during a global pandemic is a testament to the strength of our technology and product-led services model, and the visibility provided by our solid base of highly recurring revenue streams,” noted President and CEO Shuky Sheffer during the company’s earnings call with investors. “These recurring revenues accounted for roughly three quarters of total revenue in fiscal 2020, a large portion of which flowed from managed services engagements with customers under multi-year agreements,” he added.

The company is expecting sales to improve, too: It forecasts full year revenues for the current fiscal year, which started in October, to improve by between 4% and 8%, which works out at a range of $4.33 billion to $4.5 billion. That’s twice the rate of growth of the most recent full fiscal year, and is a projection fuelled by the current backlog of business, which Amdocs says is worth $3.62 billion, 3.7% better than at the same time last year.

That projected sales target includes a full year of revenues from Openet, the Irish BSS specialist that Amdocs acquired earlier this year for $180 million and which generates sales of about $70 million per year. (See Amdocs is buying the company it took to court.)

The target also includes a projected full year of revenues from OpenMarket, the Amdocs subsidiary that provides mobile messaging solutions to enterprises: In its earnings announcement, Amdocs noted it has agreed to sell that subsidiary, which it regards as non-strategic, to Infobip for $300 million, and that it will adjust its full year projections once that sale is completed. (For the full details, see the company's earnings release.)

The news, including a divident boost to be paid next year, cheered investors, as Amdocs saw its share price gain almost 7% in value in early trading on Wednesday to hit $64.69.

Amdocs will be hoping to fuel an additional line of revenues too from its newly-brokered alliance with public cloud platform Amazon Web Services (AWS). The two companies have already been working together to offer a range of cloud native Amdocs applications via the AWS platform, but now they have taken the relationship further, with AWS becoming the telco software vendor’s “preferred cloud provider” for the development of new operating models and the vendor’s cloud native strategy. “CSPs can benefit from the combination of AWS’s global infrastructure and expansive set of cloud services along with proven carrier-grade BSS, service automation solutions and services from Amdocs to rapidly deliver a broad range of business benefits,” noted the vendor in this official announcement.

“By integrating AWS and Amdocs’ business operations and cloud-native solutions, CSPs now have the ability to create new revenue streams, speed up the introduction of new cloud-based services and enhance the customer experience through machine learning,” noted AWS CEO Andy Jassy in the press release.

Amdocs notes that a number of operators are already using AWS-hosted Amdocs products, including several North American operators, Globe Telecom in the Philippines and Orange Spain.

While Amdocs has strengthened and expanded its relationship with AWS, it is not monogamous when it comes to public cloud relationships: It announced its partnership with Google Cloud earlier this year and expanded its relationship with Microsoft Azure, and Microsoft in general, last year. (See Amdocs and Google Cloud announce strategic partnership to accelerate communication providers’ journeys to the Cloud and Amdocs Announces Expansion of Global Strategic Agreement with Microsoft.)

Amdocs has also announced a number of new customer engagements, including:

AT&T: The giant US operator has selected the Openet 5G solution, which is certified to run on AWS and Azure, to “monetize the next wave of network and business model innovation around cloud, edge computing and IoT while also increasing operational agility and service differentiation.” AT&T is a long-time user of Openet’s BSS tools. See this announcement for the full details.

Bharti Airtel: The giant Indian operator has expanded its relationship with Amdocs to include a managed services deal that covers the operator’s post-paid mobile and broadband customer relationships. For more, see this announcement.

Comcast Business: The US cable giant is to use Amdocs OSS and BSS systems to support its enterprise service operations. Read more.

Globe Telecom: Globe, Amdocs and in3D-Tech have teamed up to create a pilot 3D retail digital shopping experience “leveraging 3D gaming aesthetics.” Fancy!! Shop owners should be pleased, as this means customers can browse a store without leaving the place in a state of irritating disarray. For the full details, see this announcement.

Sky UK: The UK pay-TV and broadband service provider, now owned by Comcast, is to use cloud-based Amdocs OSS and BSS tools (provisioning, real-time converged charging) to update the support systems and automate the processes for its mobile services, which are offered under an MVNO agreement with O2 UK. See this press release for more details.

A1 Bulgaria: The East European operator, part of the A1 Telekom Austria group, has chosen Amdocs to implement its contract management process and digitize its document lifecycle. Read more.