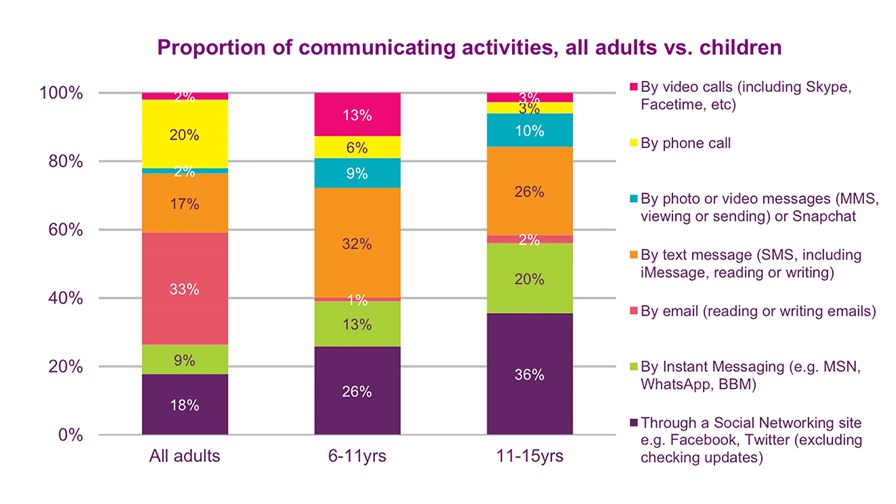 If the children are our future, as Whitney Houston once sang, then it’s time for mobile operators to get worried about voice – or rather, more worried about voice. UK regulator Ofcom has published the results of its “Digital Day” research, looking at data from a three-day diary study of children and their communications and media consumption habits. The fieldwork was done earlier this year, alongside a comparative study of adult behaviours.

The key findings suggest that children (separated into two age ranges for this study: 6-11 and 11-15 years old) are taking more control over their use of devices and applications. They are also using social media and instant messaging to communicate with friends rather than using the phone, which is in sharp contrast to adults who are more than three times more likely than 11-15 year olds to talk on the phone each week (83 per cent versus 25 per cent) and spend six times longer talking on the phone (29 minutes a day versus 5 minutes).

Twice the proportion of 11-15 year olds communicate via a social media site than make a phone call (47 per cent versus 25 per cent) and five times more use instant messaging than email each week (40 per cent versus 8 per cent). In fact, 56 per cent of the time spent communicating by older children is taken up by messaging – either text, instant messages or photo messages – compared to just 28 per cent by adults.

The 6-11 age range makes for more difficult comparison, due in large part to lower take-up and ownership of mobile devices. Just 27 per cent of this group use a smartphone at least once during a week, compared to 65-70 per cent for both the older age group and for adults. And when they do use a smartphone, the biggest use is for playing games (22 per cent of total time) followed by viewing short YouTube-type video clips (16 per cent). But it’s tablets that are most used by the 6-11 year-olds, after regular TV, with 60 per cent of them using a tablet each week (against 38 per cent of all adults)

One of the least used forms of communications studied in Ofcom’s report is video calls. It found that 11 per cent of adults make a video call at least once a week, compared to 12 per cent of 11-15 year-olds and 7 per cent of children aged 6-11. A low value across all age ranges, and not much of a gap between teenagers and adults.

Over in the US, research firm Gartner says that video calling is “growing into a key mainstream activity on smartphones, with high adoption rates in some markets.” It found that more than 50 million adult smartphone users in the US (about 35 per cent of the total surveyed) use their smartphones for video calling, although this was over a month, and not weekly like Ofcom’s study. This number grew to 60 million when those ages 17 and younger are included. The survey results showed adoption is markedly skewed toward the younger demographic, with video calling in the 18-24 age group reaching 54 per cent in the US.

“The US is advanced in its LTE service coverage and corresponding better video quality should help drive usage outside Wi-Fi hot spot zones,” said Andrew Chetham, managing VP at Gartner. “As mobile carrier spending on LTE infrastructure expands in other countries, video calling should increase accordingly.”

There’s a lot of data in Ofcom’s report, plus an accompanying data set for you to manipulate to your heart’s content, although not a lot of analysis. For example, what can we deduce about the evolution of communication and media consumption by studying these three groups? Can we assume that today’s 6-11 year-olds change their habits when they reach the 11-15 age range, or will they take their love of tablets with them? And will 11-15 year-olds give up their love of messaging and conform to the voice-centric patterns of adults, or will they keep using devices in the same manner as they do today?

The answer is probably a bit of both. Young children play games and watch video clips the most because they haven't got the network of friends with which to communicate; but they may hang on the tablet form factor for personal viewing well into their teens and beyond. Likewise the 11-15 year-olds, who, when they join the job market and start their careers, may still be able to carry on with their messaging-centric communications.

What then is the future for voice? Will the adult population of the future ever use voice as much as it does today? After all, the gap between 25 per cent of 11-15 year-old voice call users and 83 per cent of adult voice call users is huge. If this gap doesn’t narrow, then what does that mean for mobile operators? We would like to see more analysis of these trends and their implications for the evolution of our industry.