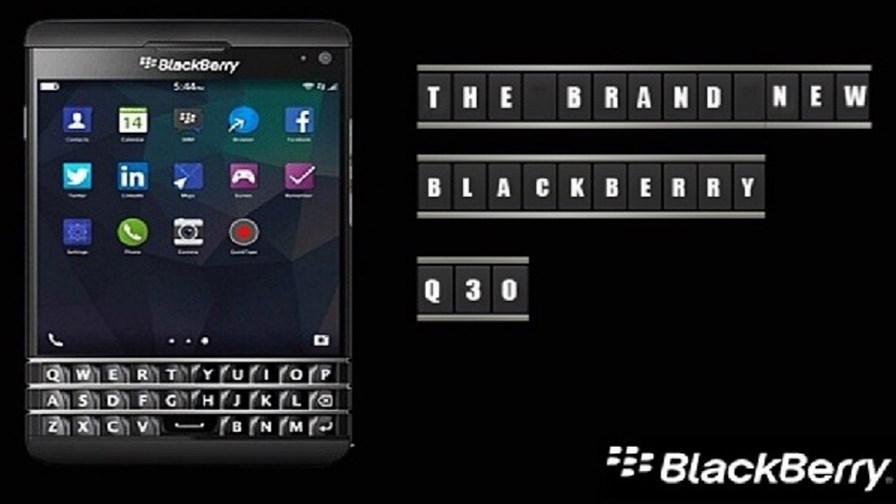 If you are not a fan of a particular TV cartoon series you probably won't understand the above quote (or the quotes below either) - yet. But you will if you read on. Wizened, juiceless BlackBerry, desperate to introduce, something, anything, that will differentiate it from the rest of the mobile devices world, is introducing the Spongebob Squarepants phone! Yes, it's square and it's fishy.

According to a posting on "Inside BlackBerry" ("The official BlackBerry blogs", in case you were wondering), "Many have thought that creativity around the design of smartphones was dead… to the point that some called 2013 "The Year the Smartphone Died"". Really? Who are these "some". Did they? Were you one of them? Have you ever heard that before? No? Me neither.

Anyway, it seems "device companies have been emulating the same, entertainment-driven look for so long that there’s been a homogenization (sic) of the visual cues in smartphone design." That's why BlackBerry has come up with a giant "handset" with a square screen.

Actually, it will take two hands to get to grips with this monster slab which seems to have sprung, fully-formed, from out of nowhere. No evidence is adduced showing that BlackBerry devoted massive time and money to the design and construction of the device based on exhaustive consumer research showing a pent-up demand for a mobile phone big enough to fillet fish on. (Sorry Spongebob).

It is claimed that the new handset is an iconoclastic wonder that will catapult BlackBerry to the forefront of trendiness by "breaking design boundaries" but actually the thing come across as a pretty desperate last-ditch attempt at technological relevance.

"Hey, Spongebob, can I borrow your cheese bucket?"

The Spongebob Squarepants phone is actually called the Passport and is described in the panegyric blog posting thus, "Just as a PASSPORT is the universal symbol of mobility and was the inspiration for the size and form factor of this device, your BlackBerry Passport becomes your ticket to open new doors of opportunity". It is, we are told in no uncertain terms "a marriage of form and function with a rhyme and reason to it". Hmm.

Under the heading, "It’s Hip to be Square", the BlackBerry Blog claims, "The BlackBerry Passport offers a unique 4.5” inch square screen with full HD capabilities. It offers a similar viewing space to a 5” inch phone but offers an even better viewing experience because of the screen’s width".

It continues, "Academic research (which is incited and unreferenced) has shown that the optimal number of characters on a line in a book is 66 characters (most current rectangular smartphones show approx. 40 characters; the BlackBerry Passport will show 60 characters). The BlackBerry Passport offers its size and aspect ratio to accommodate these characters, making it the ideal device for reading e-books, viewing documents and browsing the web." Maybe you'll even be able to make or take a phone call on it?

Then, "Consider how IMAX movies begin with the screens set to a more traditional 16:9 aspect ratio projection for conventional movie trailers, before expanding to their true dimensions (and the audience goes, “ooh”). The Passport is like the IMAX of productivity, and you don’t have to sacrifice screen real estate, vertically or horizontally". What absolute bugle oil.

Then comes the killer: There'll be "no more worrying about portrait or landscape modes." Thank you so much BlackBerry. Millions of users out there who have been driven to nail-biting insomnia worrying about which way up to hold their handsets will sleep soundly tonight.

"Go away, can't you see I'm trying to forget you?"

Speaking a few months ago in Indonesia, BlackBerry's new-ish CEO, John Chen, said, "If we do another thing, we will probably go to phablet. I think if you look at our strategy and if you look at where the market goes, there is definitely a good market for something between a phone and tablet.”

Well, the Passport is a bastardised phablet that could have been legitimate. It is aimed, squarely, at the business market and comes with with a keyboard and all the attributes that yuppies used to love about the original BlackBerry phones. But the suits have already moved on and the Passport, neither fish nor fowl, will fall between two stools and will be kicked, disregarded, into touch as a result.

The Passport will be available in September. Hopefully, top management will have remembered at that a mere seven months ago BlackBerry was forced to make an incredible US$4.4 billion write down on its inventory of unsold handsets and thus will not have sanctioned the manufacture of boatloads of Passports that will eventually go for landfill..

That said, the Passport isn't the only new device that the company will introduce this year, so there is still a slim chance that BlackBerry could come up with a winner - but the Passport isn't it. Here's an idea though. How about they make it foldable? Then it might actually fit into a briefcase. It certainly won't fit in  a pocket.

And no, a final Spongebob quote. "Once upon a time there was an ugly barnacle. He was so ugly that everyone died. The end". There's a moral there.