Cloud infrastructure services spend hit yet another record in Q1 2020, growing 34% to US$31.0 billion. Growth in cloud services was driven by organizations around the world moving to remote working as the COVID-19 pandemic hit.

As a result, enterprises sought rapid access to compute resources in the face of lockdowns and disruption. A surge in demand for online collaboration tools, ecommerce and consumer cloud services drove sharp increases in cloud infrastructure consumption, benefiting all the major cloud providers. But this was offset by a slowdown in large complex enterprise migrations and transformational cloud projects as businesses called a halt to all but the most important IT tasks as lockdowns took effect. Demand from digital companies that were impacted by the lockdowns in sectors such as hospitality and travel was also impacted. 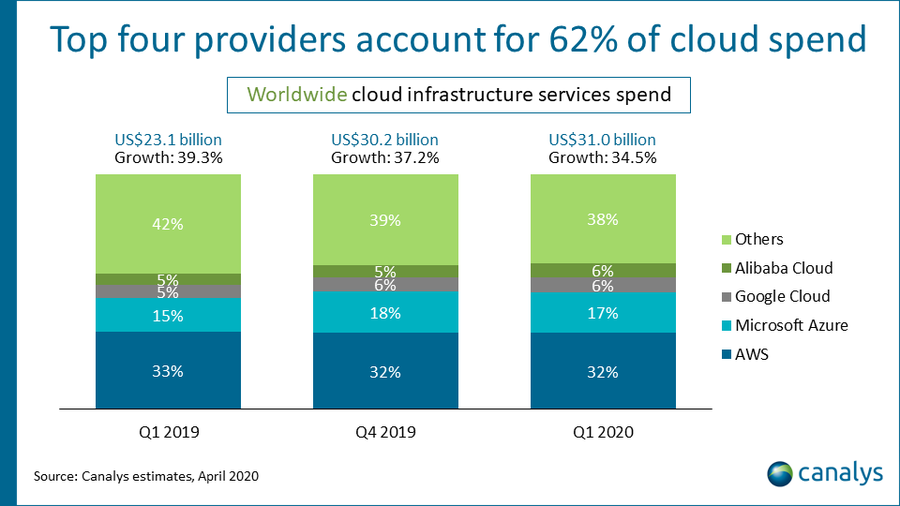 AWS maintained its leading position in cloud services, accounting for 32% of the total market in Q1 as sales grew 33%. In dollar terms, AWS outpaced its key competitors once again. Microsoft’s Azure sales increased 59%, taking its share to 17%. Capacity limits were reached for Azure in certain markets, though this was due to unprecedented use of Teams, which did not have a direct impact on Azure revenue. This also forced Microsoft to restrict consumption for some services and new customers.

Google Cloud held onto third place in the worldwide cloud infrastructure market in Q1 2020, followed closely by Alibaba Cloud. Both had a 6% share of the total cloud infrastructure services market. Google Cloud saw healthy adoption of its data and analytics platform in some of its key verticals, led by the public sector, healthcare, service providers and financial services, though this was partially offset by weakness in other segments.

Google Cloud continues to invest in an aggressive hiring strategy for Google Cloud Platform, across both enterprise sales and technical resources. Alibaba Cloud was one of the first cloud service providers to launch initiatives to support businesses affected by the lockdown in China, with free credits and access to its DingTalk collaboration suite.

“This is uncharted territory for cloud service providers, giving a boost to consumption but creating new and often challenging customer dynamics,” said Alastair Edwards, Chief Analyst at Canalys. “Cloud has become an essential tool to support business continuity in these difficult times. Many organizations have turned to the public cloud for its burst capabilities to meet a sudden spike in use. Platforms such as Zoom would not have been able to operate without the flexible infrastructure provided by the major cloud providers.”

Cloud service providers are responding urgently to the surge in consumption. Microsoft announced an emergency plan, which included adding new server capacity to its data centers in the worst-affected regions. AWS has opened two new data center regions in April, in Cape Town and Milan, with more planned in coming quarters. Google Cloud unveiled plans to open four new cloud data centers in Asia, Canada and the Middle East. Alibaba Cloud unveiled a US$28 billion investment to expand its cloud business worldwide over the next three years.

“Enterprises have been forced to rapidly change their IT infrastructure strategies and investment priorities in response to the pandemic,” said Chief Analyst Matthew Ball. “Cost reduction and protection of capital are priorities as the global economy weakens. Anything on-premises that does not improve current business continuity initiatives has taken a back seat as companies rethink budgets in the face of growing uncertainty or struggle to access physical data centers.

At the same time, companies around the world urgently need access to flexible compute capacity to support remote working, collaboration, online commerce and security. Cloud infrastructure is an obvious short-term solution. This has been a boon for most if not all the major players.”

Yet this does not tell the whole story. Cloud service providers have also felt the negative impact of a slowdown in large consulting-led projects, including SAP migrations, hybrid cloud deployments and other transformational projects that have provided a big boost to cloud growth in recent quarters. Cloud investment in the worst-affected vertical segments, such as hospitality, aviation, construction, tourism and manufacturing, is being scaled down or delayed. This has offset some of the short-term growth enjoyed during the quarter.