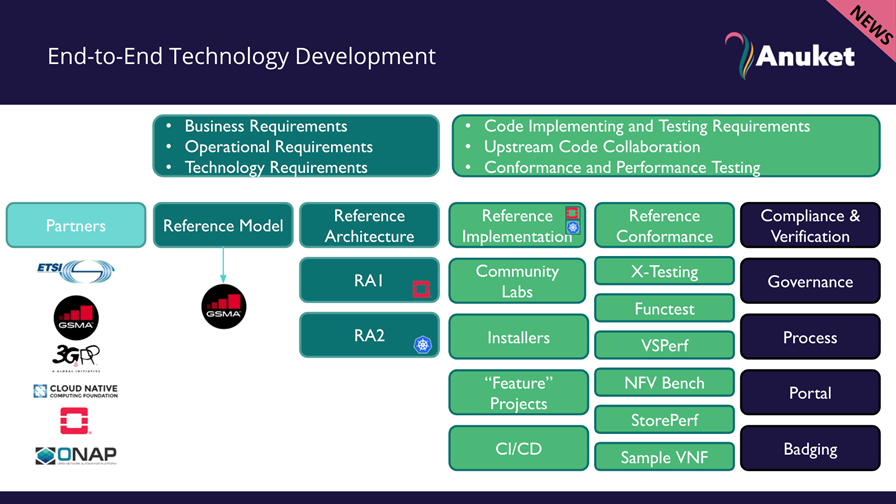 Open source group LF Networking has combined two of its initiatives, CNTT and OPNFV, to create a new project called Anuket, which is focused on helping the telecom sector find a more unified, common approach to a virtualized and more cloud native world (and yes, it's named after an Egyptian goddess…).

CNTT has been around for less than two years but with a mission that is becoming increasingly important – to develop models and architecture blueprints that help make the shift from the world of integrated, physical networking systems to a more software-oriented, cloudified networking world easier and quicker for telcos: That aspiration is even more important in 2021 than it was in mid-2019.

And as we noted last year, CNTT – which is actually a joint initiative between LF Networking and the GSMA – had already revamped its name to reflect the changing nature of telco cloud strategies, from its original Common NFVi Telco Taskforce to Cloud iNfrastructure Telco Taskforce. (See So you thought you knew what CNTT stood for…)

From the get-go it had a very close relationship with OPNFV (Open Platform for NFV), which had since 2014 been developing tools and processes to help with the conformance and performance of virtualized infrastructure, and which recently announced its 10th and final release.

CNTT is still in the final stages of completing its final release, due to complete in early February, which will initiate “a number of new work areas, including infrastructure automation and observability, hardware management, and hardware abstraction and network fabric programmability. These topics will be crucial to ongoing operational scalability, especially as edge deployments become more common.”

To find out who is involved, check out this list of folks who are in the Transitional TSC [Technical Steering Committee] – AT&T’s Al Morton, Lead Member of Technical Staff at AT&T Labs, and Telstra’s Walter Kozlowski, Principal, Cloud Infrastructure Architecture at Telstra, are the co-chairs of the TSC.

For the full list of the 28 companies engaged in Anuket developments, check out this set of company logos.

And what should the outcome of their efforts be? Well, this isn’t a standards body… what we’re talking about here is the development of blueprints, of common approaches to rolling out telco cloud platforms and adopting new processes and applications, that can help the industry follow common paths that reduce planning and development time and help technology developers focus on specific industry requirements – currently, fragmentation in the area of telco cloud developments is still too great. What the industry needs is consensus.

The move has support from some significant and influential companies – AT&T, BT, China Mobile, Deutsche Telekom, SK Telecom, Verizon, Vodafone and others from the operator world, for example. (You can see some of the operator comments in the press release.)

But if this is going to fly, it’s going to need a greater consensus and even more support from the carrier community – the same challenges faced by the Open RAN community, which of course is closely related, as Open RAN deployments will ultimately only fly as and when network operators have the optimum telco cloud architectures in place.

We’re hoping to get some greater insight into what the Anuket team has planned and how it is adjusting to the changing needs of the industry very soon, so watch this space is telco cloud developments are in your ballpark.