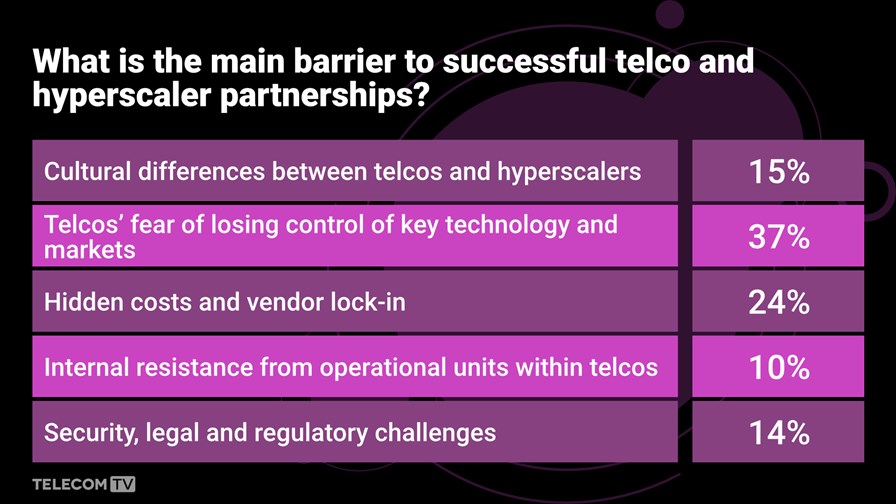 The number of strategic relationships between telcos and the public cloud giants is growing by the day, with BT’s tie-up with AWS just the latest, but there hasn’t been a mad rush from the telco community, despite the many potential advantages of a relationship with one or more of the hyperscalers. So what might be holding them back?

That’s the question we asked in the audience poll during TelecomTV’s recent Telcos and Public Cloud Summit, and we garnered a very interesting set of responses.

Specifically, we asked the question: What is the main barrier to successful telco and hyperscaler partnerships?

As you can see from the results above, of the five options, ‘Telcos’ fear of losing control of key technology and markets’ attracted the greatest number of votes, with 37% of the total – support for that option grew during the two days of the Summit, we noticed.

‘Hidden costs and vendor lock-in’ was also a popular selection, attracting 24% of the votes: In a way it’s surprising this didn’t get more support, as the economic models around large-scale migrations and/or deployments on public cloud platforms by telcos over meaningful periods of time is unknown, and certainly not everyone believes that such moves will guarantee cost-savings.

Support for the other options – cultural differences, security, legal and regulatory challenges, and internal resistance within telcos – was limited, which suggests that security is not the barrier it used to be and that there is a greater understanding within telcos of how such relationships would work, as well as a more positive attitude towards embracing cloud-oriented processes and working practices, such as CI/CD.

In many ways it’s still early days for telco/hyperscaler relationships, even though they are becoming more prevalent, and there’s still a lot to learn on both sides of the fence. The various challenges and opportunities that arise from such relationships were explored in details during the summit’s various sessions, and the final live Q&A session in particular provided some interesting insights into how various barriers are v=being broken down.

The topic will be high on the agenda at the upcoming, in-person DSP Leaders World Forum 2022 event in Windsor, UK, when representatives from the cloud, vendor and network operator community will discuss the ins and outs of such relationships during the ‘Clouds on the Horizon’ session.