"I don't know, all them robots coming over here, taking our jobs…" 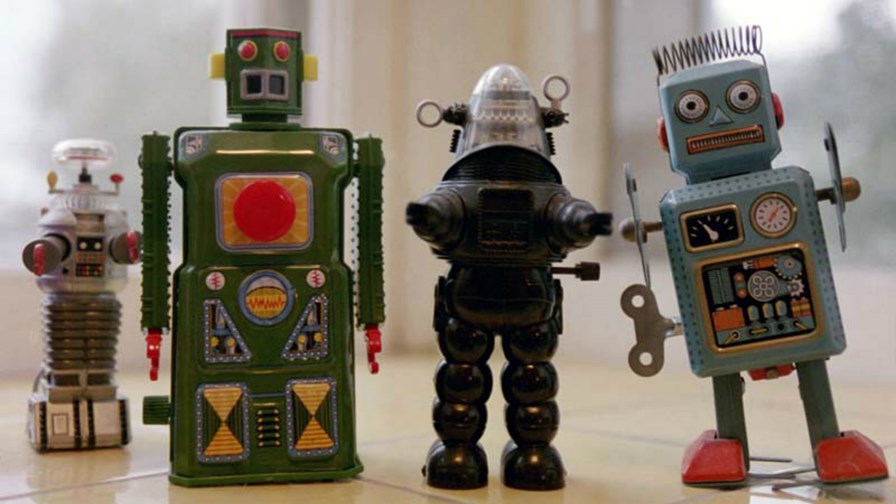 Andy Haldane, the Chief Economist at the Bank of England and Executive Director of Monetary Analysis and Statistics at the Old Lady of Threadneedle Street, has published a new research paper showing that in the medium-term some 15 million jobs in the UK, and 50 million jobs in the US, are at high risk of being lost to robots.

He adds that, in the longer-term, robotic automation could result in the disappearance of 50 per cent of all British jobs, thus greatly increasing the gap between those in work and those without work and exacerbating the growing gulf between the rich and the poor, the haves and the have nots.

Mr Haldane opines that the notion of "technological unemployment", the centuries-old argument that increasingly sophisticated machines put people out of work and keep a tight lid on the wages of those lucky enough to still have paid work, has not been proven as a permanent and immutable economic trend. Rather, he says, the history of technological progress has, overall and despite some heavy but generally comparatively short-lived bouts of sectoral unemployment, increased wages and living conditions. “Technology has enriched labour", he claims, "not immiserated it.”

Andy Haldane also stresses that the proliferation of automation, the robotics industry,  high-tech businesses and each successive wave of technological development has spurred the creation of many highly-skilled and well-paid posts; what he calls a "growing tree of rising skills, wages and productivity." At the same time though they also "hollow out this tree" and this ongoing arboreal evisceration has “widened and deepened with each new technological wave” and so aggravated the job prospects and wage differentials between high- and low-skilled workers.

Nonetheless, Haldane maintains that, hitherto, the impact of improved technology on such differentials between employment groups and industries has been "broadly neutral." However, he adds ominously, "This time could be different.”

During the second half of the 20th Century new machines (particularly computers) not only took over many traditional manual tasks but lots of cognitive ones as well. As Mr. Haldane says, "The set of human skills machines could reproduce, at lower cost, both widened and deepened." And, today, in the mid-second decade of the 21st Century, the positions most at risk of robot takeover in the short-term are low-paid administrative, clerical and repetitive production posts. In the medium-term, slightly-skilled, mid-pay rate jobs will also go.

Heading down the road to "The Singularity"

Using analytical methodologies and models first applied in the US, the Bank of England examined the potential impact of smart machines and robots on the 30 million-strong British labour market and split jobs into three main sections categorised by the high, medium and low possibility of automation.

The report says, "For the UK, roughly a third of jobs by employment fall into each category… taking the probabilities of automation [for each category] and multiplying them by the numbers employed gives a broad-brush estimate of the number of jobs potentially automatable. For the UK that would suggest up to 15 million jobs could be at risk."

It's a downbeat assessment to say the least of it. The fact is that machines, driven by ever more sophisticated and complex software and algorithms now routinely perform tasks that only, a few years ago, were, if not unimaginable, than at least regarded as being applicable to some indeterminate time in the distant sci-fi future (look at self-driving cars and robot surgery for example). But now we have increasing evidence that machines (including telco and other comms networks) no longer just process and problem-solve on humanity's behalf but are also developing the abilities to perceive, think independently and even emote!

Hence the current media hype about the rise of the machines, the threat of untrammeled AI and its potential ability to outstrip the cognitive capacity and ability of humankind and destroy us all. This tipping point, known as "The Singularity", is closer than anyone imagined it might fifty years ago be and there is plenty of academic speculation currently doing the rounds to the effect that mankind may pass over the "peak human" point sometime in the next fifty years and begin its descent to who-knows-what as the robots take over and rule forever.

It's a dispiriting thought but as many science fiction stories remind us, machines do have "off" switches.

Andy Haldane's prognosis may be gloomy but mankind is immensely adaptable and good at discerning light at the end of the tunnel. Hopefully what we are witnessing in the reaction to inevitable automation is a fundamental rethinking of and realignment in the nature of work itself. Look at what is happening. Part-time working, home-working, temporary contracts and a huge surge in the incidence of self-employment and the establishment of micro-businesses is already having an effect, particularly in the 'old' industrialised economies.

Perhaps, for a lucky few, the future will actually be some sort of a variation on the "Arts and Crafts" utopia envisioned by William Morris a century and a half ago where a new artisan class providing one-off, bespoke, highly personalised and individualised products and services running the gamut from healthcare to luxuries will be the order of the day. A pipe-dream? Yes, but surely better than the likely possible alternative of mass unemployment, economic meltdown, social unrest and insurrection on a global scale.

Network Core: Delivering on the promise of 5G | Fireside Chat

Why CSPs Must Plan for Automation and AI

How AI is revamping home and enterprise network management