Most Peculiar: Tiny US town gets 10 Gbit/s broadband 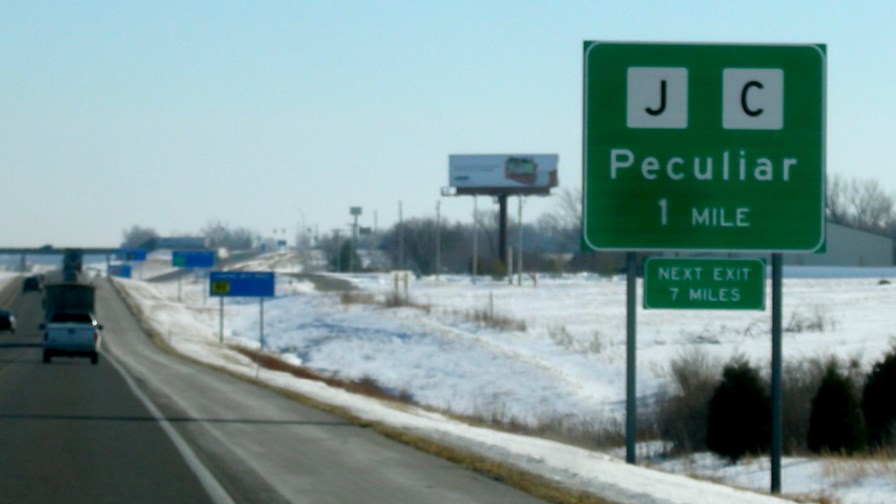 The splendidly named town of Peculiar, Missouri, (population 5,118 and sited south-west of Kansas City) is one of the smallest Smart Cities in the US. It has just gone live with its new unified communications SD-WAN infrastructure providing 10Gbit/s broadband connectivity via point-to-point fibre, WAN and scalable Internet access.

In the US "small" smart cities are defined as conurbations comprising of populations of 150,000 or less - so Peculiar really is quite small - but that has not stopped it from deploying leading-edge comms technology to leverage growth opportunities not only for municipal operations but also for all its citizens.

According to a national survey conducted in 2018 by the US Council of Mayors and the London-headquartered industry analysis organisation IHS Markit, some 30 per cent of Smart City initiatives originate in small towns but that still leaves thousands of US municipalities and councils without any developed plans to implement smart city initiatives any time soon. Peculiar is, well, err, peculiar among US small towns in that it is already, officially and by definition, a "Smart City" and it intends to ensure that it stays that way and remains in the vanguard of those building-out and exploiting advanced comms technologies to the advantage and betterment of its people.

These days, municipal governments the length and breadth of the US are facing mounting financial and operational challenges as they strive to develop and maintain modern IT and comms infrastructure that enables successful operations, constituent services and government transparency. That's why it is now generally accepted that collaboration and partnership with innovative service providers that have the ability and experience to be able to customise and scale solutions can be of the greatest help in providing the efficient and cost-effective delivery of services.

So, Peculiar has chosen Comcast's Business Ethernet Network Service which has a reputation as being a robust and relatively inexpensive alternative to traditional network technologies and is seen as being particularly suitable for organisations such as municipal authorities that are involved with the utilisation of high volumes of data or are responsible for mission-critical applications such as police, ambulance and fire services.

"Serving Peculiar residents to the best of our ability"

Brad Ratcliff, the Peculiar City Administrator, commented, "Serving Peculiar residents to the best of our ability, today and tomorrow, is our top priority. The partnership with Comcast Business is another step towards that goal. This upgraded communications technology increases our ability to meet the needs of Peculiar people today and prepares our city for a vibrant, growing future by attracting new businesses and enhancing economic growth.”

Historically, smart city initiatives were seen to be proper to large metropolitan areas and that was hardly surprising given that the seemingly inevitable and endless growth of monster megalopolis cities and the increasing urbanisation of vast swathes of the planet. However, there are an ever-increasing number of instances where small towns and cities have proven themselves to be much quicker off the mark and considerably more nimble in their approach to the rapid deployment of smart technologies than big, lumbering, ossified, bureaucratic cities.

Until just a few years ago, most US service providers disregarded small US towns and focused on bringing broadband to the big cities. But now with the imminent advent of 5G, that dynamic is changing and little towns like Peculiar can now bring about the all-important digital transformation. What's more, in smaller towns it is much easier for the municipal authorities to connect quickly and directly with residents and ensure that the digital services they require are fully met. In Peculiar the Comcast technology permits city employees to monitor infrastructure, maximise efficiency and dynamically place resources where they are most needed whilst keeping costs down.

The hope is that, across the US, small and medium-sized towns will be able to parlay digital technology into proven and continuing economic development. Smart, connected technology is the easiest and best way to demonstrate a town's commitment to innovation and entrepreneurial thinking. Forward thinking city leaders, such as those in Peculiar, have realised that modernising their municipal technology can provide the benefits of broadband access that is commonplace in large cities but with the comparative intimacy and fleetness of foot that is a characteristic of smaller communities.

Like many small American towns, Peculiar has a cast iron, black and white painted "Historical Spotmarker" on the village green. It reads. "In 1861 - 1864 while bloody battles raged throughout the southern states, nothing happened here." Well, it has now.