How 'giga' is your country? New monitor to track the trend to 1 gigabit/s access 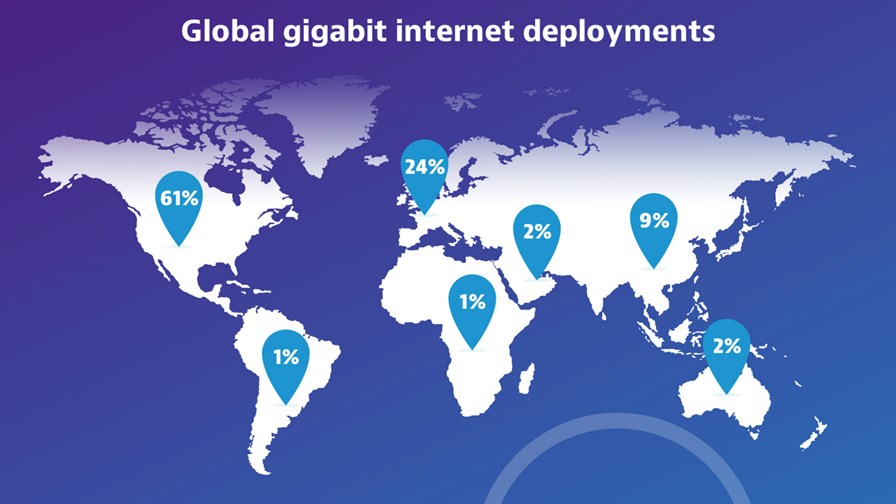 The last two years has seen an acceleration in the number of CSPs offering ‘Gigabit’ internet access services. According to Viavi Solutions there are now more than 500 ‘operational or planned’ deployments, most of them launched in the past two years. So Viavi has pulled together an online Gigabit Monitor to track the expansion of the top end of the broadband access market on a global basis.  (see www.gigabitmonitor.com)

According to that ‘Gigabit Monitor’ there are now 350 live gigabit deployments globally. There are another 164 announced or under construction and Viavi is counting in the full range of technologies by their headline speeds. This obviously includes fibre access speeds such as GPON and cable’s DOCSIS 3.1;  but also DSL technology with G.fast; and mobile access networks: LTE-A, 5G and 802.11ac.

Viavi says Gigabit Monitor is intended to showcase a whole world of gigabit internet and zoom in for detail on announced and available services. It can show whether a service is Announced (service provider has publicly announced deployment plans in a given market), Under Construction (network build is underway), is in the form of a Trial (a limited live network is in operation) or Commercial (service is currently available to consumers).

North America has the largest share of announced gigabit deployments, with 61 per cent. Europe is second with 24 per cent. Asia, Australasia, Middle East, Africa and South America share the remaining 15 per cent of deployments.

Viavi’s goal is to have the database as an updateable enterprise with its users submitting new entries as announcements are made or new networks come onstream.

As a result the ‘map’ seems bit patchy at this stage. This is understandable - you have to start somewhere - but a glance at the map as it stands today gives a rather lopsided view of high speed broadband deployment on a global basis.

My main beef with this  approach is that the monitor seems to be counting in highly shared services. LTE-Advanced, for instance, can use techniques such as  8x8 MIMO and 128 QAM on the downlink to get to a peak of  3.3 Gbit under ideal conditions, in the lab and with a following wind, but that is unlikely translate into 1 gigabit/s speeds for the user. As has proved to be the case with unadvanced LTE, users tend to experience but a fraction of the initially announced headline speed - especially in the US where wireless broadband speeds are still amongst the slowest anywhere.

This fudging of real, as opposed to theoretical speed, is a real problem and, despite years of moaning just doesn’t seem to be getting any better as my colleague Martyn Warwick points out in his piece today (see - Britain's broadband statistics are "flawed and meaningless").

With the Global Gigabit Monitor the result is that the country numbers look weird to say the least, with the US seemingly ahead of the entire field. South Korea, meanwhile, far and away the world leader in terms of broadband access, hardly rates a mention in the count.

By recognising only 1 gigabit/s services, the monitor is  ignoring  all the services (planned and actual) delivering well above 20 Mbit/s but under the magic 1 gigabit/s.

Also, many experts will point out that 1 gigabit/s is (currently) far and away above what users technically require  - a few hundred megabits per second would do quite nicely. However, there is an argument that a speedy move to 1 gigabit/s access will help push the whole industry forward as content providers compete to fill the pipes up with better, more compelling content.

A monitor monitoring just how quickly that transition comes about is probably a handy addition.