FCC gets onboard with community broadband in Chattanooga 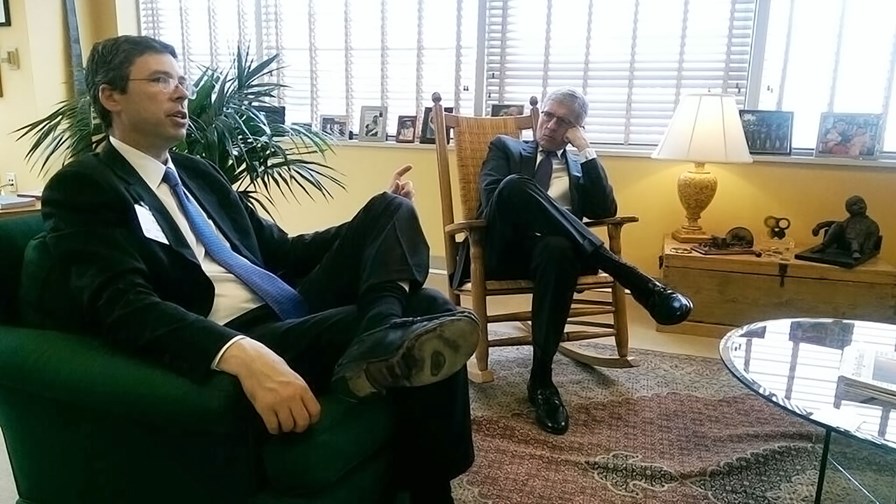 US municipal broadband, or community broadband as the regulator FCC puts it, is an utter mess. Long-time TelecomTV viewers will have seen my series of reports from the US about broadband as part of our Connected States series (with the new site migration, we’ll soon be making these available again). We reported on several valiant efforts to bring usable broadband to communities hitherto deprived by the major national operators.

The one beacon of hope appeared to be the city of Chattanooga in Tennessee. Thanks to forward thinking from the local politicians and regional power company EPB, Chattanooga rolled out its own gigabit broadband service and – judging by the economic decline in neighbouring communities – managed to reinvent the city as business location fit for the connected society.

It appears that the FCC has finally realised that Chattanooga can offer many lessons to the thorny problem of community broadband.

FCC chairman Tom Wheeler met the mayor of Chattanooga, Andy Berke, this week to better understand the role of broadband in the transformation of the city. Writing on his blog, Wheeler said that: “if any city understands the power of networks to drive economic growth, it’s Chattanooga, Tennessee.”

The former railroad town became a major industrial centre in the late 19th century and early twentieth. But as with most industrial centres in developed nations, the global economy soon ended this period of prosperity. When the city decided to turn its focus to the new digital economies, it found that its infrastructure was lacking and that timely improvements were not going to be forthcoming. So it decided to roll its own. Forget past associations with ‘the Chattanooga Choo-Choo’, its new moniker is ‘the Gig City’.

Chattanooga is poster child for benefits of community bband networks & also prime example of efforts to restrict them http://t.co/dn3jGR4tlw

Whilst neighbouring communities want to join and be part of an extended gigabit network, they are prohibited by state legislature. No further geographic growth is currently possible. And so they are left to the whims of the telcos and cable cos: “Commercial broadband providers can pick and choose who to serve based on whether there is an economic case for it,” wrote Wheeler.

He goes further, and gets to the heart of the matter, when he adds: “If the people, acting through their elected local governments, want to pursue competitive community broadband, they shouldn’t be stopped by state laws promoted by cable and telephone companies that don’t want that competition.”

And so Wheeler wants the FCC to exercise its power to pre-empt state laws that ban or restrict competition from community broadband. “Competition works – when it is allowed to,” he wrote. “Throughout the country where we have seen competitive broadband providers come in to a market, prices have gone down and broadband speeds have gone up. No wonder incumbent broadband providers want to legislate rather than innovate.”

Removing restrictions on community broadband should enable the expansion of high-speed Internet access in underserved areas, spurring economic growth. The FCC is sure to have a fight on its hands if they want to turn years of talk into action. First step; start pre-emption proceedings – but so far, despite Wheeler first raising the matter in February, there’s no evidence of when this will happen. 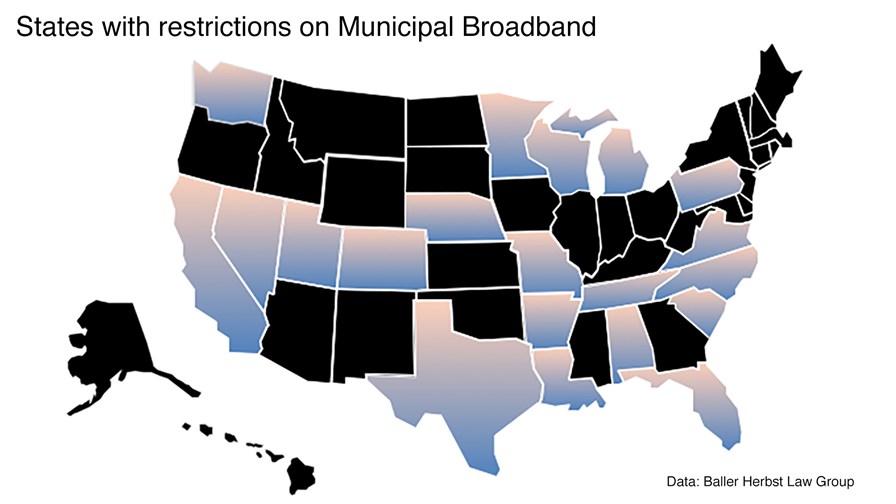 James Baller of DC-based law firm Baller Herbst is a long-term advocate for municipal broadband. His latest list of state restriction can be downloaded here, and is summarised below: