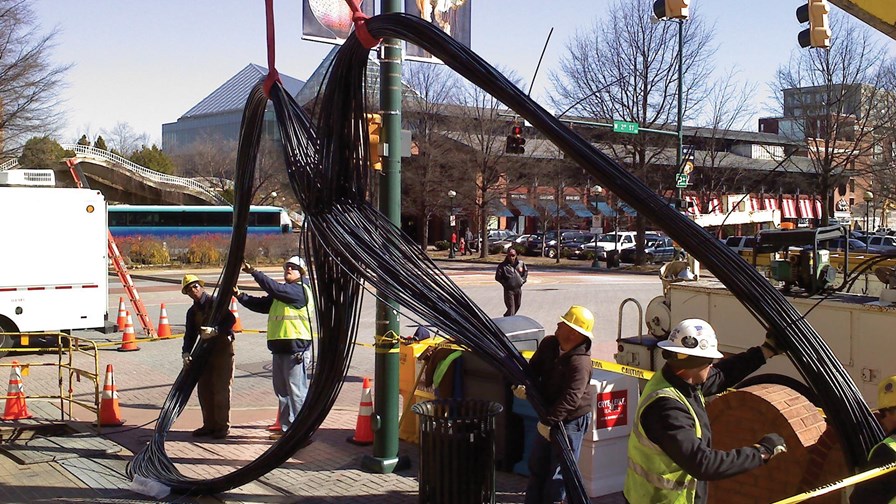 You have to hand it to Harold DePriest and his team at Chattanooga’s power company EPB – they know a thing or two about broadband, and don’t hang around waiting for the established telecoms industry to catch up with their thinking. When they decide to do something rather radical, they go right ahead and do it themselves.

Five years ago, EPB launched its 1Gbit/s broadband users to homes and business in the Tennessee city – making it the first Gigabit City in the US, long before Google Fiber and any of the telcos rolled out their somewhat selective gigabit access networks (I interviewed Harold at the time, and you can still view the video here, sorry about the lack of HD). This week, EPB has done it again – Chattanooga is now America’s (if not the world’s) first 10 Gigabit City.

For just $299 per month, businesses and consumers can now access a symmetrical 10Gbit/s service. That’s worth repeating – 10Gbit/s for $299 a month. Oh, and there’s free installation, no contracts and no cancellation fees.

If your business requires huge amounts of bandwidth, and you resent paying vast sums for dedicated Ethernet and leased lines, then our suggestion is that you relocate to Chattanooga pretty darn fast. Businesses focused on video graphics, 3D printing, medical imagery, software development and big data are all potential customers – especially those that encourage home-working. In fact, TelecomTV is seriously considering a trans-Atlantic relocation, especially after just paying a $200 installation fee with a 24-month contract for a so-called 76Mbit/s VDSL connection at $50 per month.

The utility company is providing the service via its EPB Fiber Optics unit, utilising Alcatel-Lucent’s TWDM-PON broadband technology. What’s more, this isn’t a point-to-point configuration – this service is available to every home and business in a 600 square mile area.

“Five years ago, Chattanooga and Hamilton County became the first in the United States to offer up to 1 Gig Internet speeds,” said Harold DePriest, president and CEO of EPB. “Today, we become the first community in the world capable of delivering up to 10 Gigs to all 170,000 households and businesses in our service area.”

“Chattanooga’s 10Gbit/s fibre optic network is a world-class platform for innovation,” said DePriest. “In recent years, the need for faster Internet speeds has increased rapidly. Chattanooga is the perfect place for companies to enhance their productivity today and test the applications everyone in the country will want tomorrow.”

A study recently released by University of Tennessee says that “the Gig Network” helped the Chattanooga area generate at least 2,800 new jobs and at least $865.3 million in economic and social benefits. The study also found the EPB smart grid, which is the cornerstone application of the utility’s community-wide fibre network, has allowed customers to avoid an estimated 124.7 million minutes of electric service interruptions by automatically re-routing power (often in less than a second) to prevent an outage or dramatically reduce outage durations.

“Alcatel-Lucent is a strong proponent of the benefits of ultra-broadband technology for economic development,” said Danny Rollins, VP Global Enterprise and Public Sector Sales for North America at Alcatel-Lucent. “As a long-term supplier for EPB’s gigabit networks, we’re proud to be helping EPB and the city of Chattanooga be at the forefront of the ultra broadband movement and provide the industry’s leading fibre technology to help deliver on many services and innovation it brings to the community residents and businesses.”

Over the past five years, the “Gig Network” has transformed Chattanooga’s economic profile, moving the city away from its reliance on dwindling manufacturing prospects and helped attract new companies and stimulated the city’s entrepreneurial culture. Chattanooga recently became the first mid-sized city with an established innovation district and is home to America’s third largest business accelerator, the INCubator.

“Chattanooga is a city ready to compete in the 21st Century innovation economy,” said Mayor Andy Berke. “The 1Gbit/s service has already played a pivotal role in transforming our city, attracting new businesses and providing our residents with affordable high-speed connectivity. The 10Gbit/s offering will continue to grow wages, diversify our local economy and propel Chattanooga as a centre for technology and invention.”

Building for the future

Yes, Chattanooga does benefit from having a favourable infrastructure and autonomy. But it’s had to work hard to realise the full potential, and is still fighting with the politicians. The EPB was established back in 1935 and is one of the largest publicly-owned electric power distributors in the US. It owns the posts, wires and ducts that carry its electricity supply; which made the ability to roll out its won municipal broadband network so much easier. But first and foremost the network was designed to improve the electrical supply, and to create a smart grid. Very clever network planning, bright ideas, and support for its future vision enabled EPB to launch a 1Gbit/s triple-play service in 2010 – which was greeted with disdain and incredulity by most of the establishment. Not so now.

Neighbouring districts have lobbied hard to allow EPB to extend its network, and thereby extend the economic stimulus that affordable, widescale and high-speed broadband brings – only to have plans knocked back by State politicians. So for the near future, Chattanooga (or at least the part of it that’s serviced by EPB) remains an island of ludicrously high-speed and affordable broadband, available only to its 170,000 homes and businesses.

When we spoke at the launch of its 1Gbit/s network, Harold DePriest said that it was a simple matter for them to turn up the dial and provision ever-higher data throughput at marginal extra cost. But at that time, he was more concerned about what people would do with one gig, and whether or not it would be utilised. Would there be a demand for 10 gig speeds? The answer, apparently, is yes please!