AT&T announces plans for massive 1Gbit/s rollout; or does it? 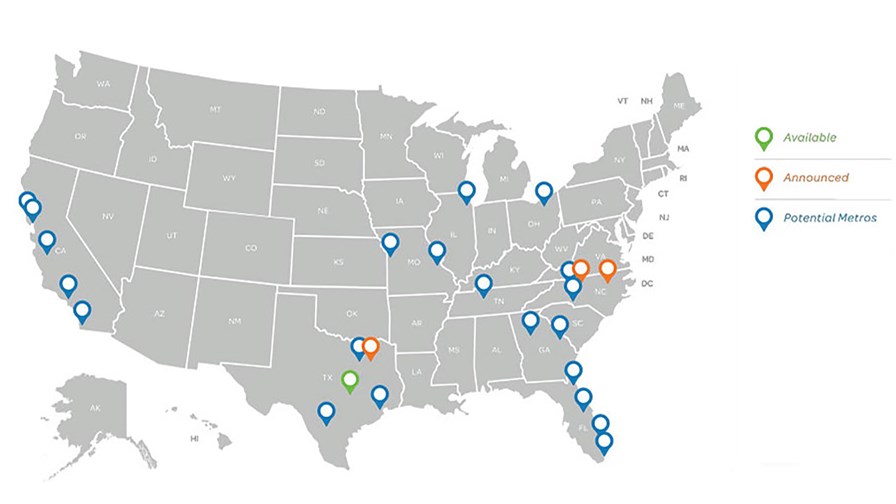 The Gigabit Fibre Circus continues to tour the US, promising fun and excitement for all the family. But look closely and you’ll soon see the smoke and mirrors; all is not as it seems.

When Google announced its plans in early 2010 to build out a gigabit network to create a ‘Google City’, it was inundated with support from US regional municipalities; local governments bent over backwards with help and concessions to be awarded the prize of host city. For the incumbent telcos, it must have felt like a kick in the teeth.

Weren’t these the same municipalities that criticised the telcos, that tried to create their own competing networks, that constantly bemoan the state of telecoms services? And yet here they are kissing up to Google? All because Google promised it might just trial a high-speed network in their town?

Then, when Kansas City was selected and services started to roll out in 2012, Google decided it would extend its gigabit programme. Next it was Austin, Texas, and in February this year it announced plans to expand Google Fiber and has invited the authorities in nine metropolitan areas around the US (encompassing 34 cities) to “work with us to explore what it would take to bring them Google Fiber”.

AT&T must have decided enough was enough.

The US telco has issued a press statement announcing “a major initiative to expand its ultra-fast fiber network to up to 100 candidate cities and municipalities nationwide. The fiber network will deliver ‘AT&T U-verse with GigaPower’ service, which can deliver broadband speeds up to 1 Gigabit per second and AT&T’s most advanced TV services, to consumers and businesses”.

At first glance, that looks like AT&T will be rolling out a gigabit service to 100 cities across the US. Hurrah! But look more closely and you’ll see that there is absolutely zero commitment to achieving such an aim. As the announcement headline says, “AT&T eyes 100 US cities” – it’s only considering the service. Actual rollout is dependent on a large number of factors, including help from local authorities.

As Karl Bode at DSL Reports puts it, we are seeing a new class of FTTx broadband emerging: “Fibre to the Press Release”.

The announcement said that AT&T “will work with local leaders… to discuss ways to bring the service to their communities”. It indicated that successful locations need to demonstrate that they have “suitable network facilities, and show the strongest investment cases based on anticipated demand and the most receptive policies”. In exchange for these “receptive policies”, AT&T will of course help with economic development by bringing jobs and advanced technologies to these areas.

“We’re interested in working with communities that appreciate the value of the most advanced technologies and are willing to encourage investment by offering solid investment cases and policies,” said Lori Lee, senior EVP of AT&T Home Solutions, emphasising exactly what it is that the telco needs before it even thinks about bringing in the construction gangs.

Interestingly, many of the locations AT&T is considering cover the current and future sites where Google Fiber is planning to expand. Absent from the list is Chattanooga, which has long had its own superbly successful gigabit network, and which was the city that first demonstrated how a high-speed network could be rolled out at relatively low cost – all thanks to a progressive administration and an equally progressive energy utility, with not a telco in sight.

No specific price details have been released, but if we look at AT&T’s pricing in Austin, Texas, where it has its ‘U-verse with GigaPower’ service. Pure broadband is priced at $70 per month for a three-year contract, and covers the 300Mbit/s ‘Internet 300’ service plus a free upgrade to 1Gbit/s later this year. Add the U-verse TV service and the price rises to $120 per month. Not surprisingly, these prices exactly match those of Google Fibre…

Earlier this year, AT&T said it would cut its budget for capital expenses in 2014 to $21 billion. Consequently, its latest announcement reassures investors that this expanded fibre build is not expected to impact AT&T’s capital investment plans for the year – so don’t expect any serious developments until 2015 at the earliest (the phrase “AT&T continues to expect that its wired IP broadband network will reach 57 million customer locations by the end of 2015” doesn’t bode well for new subscriber growth from this gigabit plan any time soon).

There will be executives and accountants at telcos around the world scratching their heads in puzzlement over this. “How can they deploy a massive new gigabit fibre service without increasing their Capex,” they’ll be asking themselves. “What magic is this?”

The answer is: because it’s not going to happen. It’s going to take an age before final locations are chosen and commitments are made. And then, chances are those locations will already have substantial fibre networks supporting DSL-speed services, which AT&T can upgrade.

AT&T’s approach is not so different from Google’s (although you could argue that Google’s long-term strategy is to foster competition, which is certainly not AT&T’s strategy). Milo Medin, VP of Google Access Services, said that the 32 cities it had identified in its next round of expansion were only candidate cities, and that authorities would need to negotiate with Google “to explore what it would take to bring them Google Fiber”. Is that any different from AT&T wanting details of “investment cases and policies”?

Has broadband ever known so much hot air?

We don’t care how many cities have been invited to the negotiating table, what we want to know id how many actual deals and commitments have been made. And that’s what the residents and businesses of these cities want to know as well – don’t get their hopes up with promises of might be possible, it’ll only end in tears.

Fibre to the Press Release indeed.