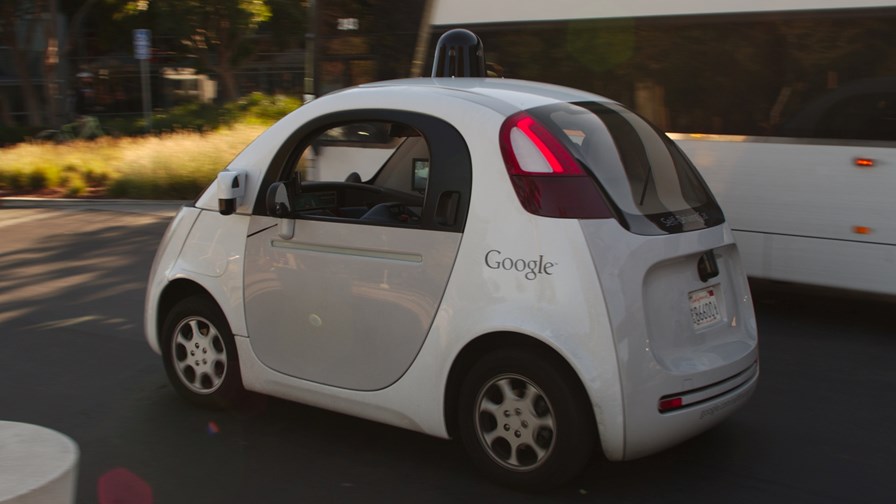 In the US, the California Department of Motor Vehicles (DMV) is to introduce a 'State Ruling' that will require Google's 'driverless cars' to have a driver "present inside" them at all times the vehicles are on the road. However, Californians should be grateful that the things won't have a man walking ahead of them waving a red flag – a legal provision on automobile users in the UK back in the 19th century.

According to the California DMV, its driverless cars regulation will require "a licensed operator to be present inside the vehicle and be capable of taking control in the event of a technology failure or other emergency". And that, of course, means the cars will have to come fitted with the conventional steering wheel and brake and accelerator pedals - items notably absent from Google's prototype vehicles trundling (moderately) autonomously around Mountain View and its environs. Sort of negates the entire concept really, doesn't it?

As it grows up, Google is a company that, more and more frequently, defaults 'automatically' (sorry about that) to a position of po-faced pomposity whenever someone takes the mick out of one of its more off-the-wall flights of fancy.

However, Google first revealed that it was working on what it called its "fully autonomous cars program" back in 2009 and has actually been road-testing them, all over California, since 2012. It is a very well resourced R&D initiative that could eventually lead to huge changes being wrought in the unbelievably huge, powerful and lucrative car-culture that is a de facto definition of a major part of the American psyche and a particularly closely- and jealously-held embodiment of the notion of applied individual freedom.

The head honcho of the California DMV, Jean Shimoto, commented, “The primary focus of the deployment regulations is the safety of autonomous vehicles and the safety of the public who will share the road with these vehicles. Self-driving cars will also be required to detect, self-diagnose and respond to cyber attacks and other unauthorised intrusions, allowing the human driver to take control." Fat chance of that, given the lessons of history and more recent hacking events.

California "writes a ceiling" on self -driving cars, says Google, mangling English into a bloody pulp

A spokesperson for Google's Driverless Car Division, responding in the fractured English that typifies high-tech companies the world over, said, "We are gravely disappointed that California is already writing a ceiling on the potential for fully self-driving cars to help all of us who live here."(Purleeze! Plastering or painting a ceiling, yes. But "writing a ceiling" on something? Nay, nay, a thousand times, nay.)

The statement continues, “This maintains the same old status quo and falls short on allowing this technology to reach its full potential while excluding those who need to get around but cannot drive. In developing vehicles that can take anyone from A to B at the push of a button, we’re hoping to transform mobility for millions of people, whether by reducing the 94 per cent of accidents caused by human error or bringing everyday destinations within reach of those who might otherwise be excluded by their inability to drive a car. Safety is our highest priority and primary motivator as we do this."

Google's initiative has many supporters, not least at Apple and Uber, two other technology companies with plans to introduce self-driving vehicles, and there are already mutterings that should the DMV hold to its hard-line, companies will simply up-sticks and move elsewhere - to the commercial detriment of the Golden State.

As soon as the news broke, Michael Cunningham, senior vice president of public policy at the Bay Area Council said, “Autonomous-vehicle technology will continue to advance in spite of DMV regulation, but it may well relocate to states that adopt a more flexible and accommodating regulatory structure. [For example, neighbouring Nevada has markedly more liberal and accommodating attitudes towards the development and regulation of autonomous vehicles, as does Texas] We would stand to lose the economic benefit of having this cutting-edge industry based in California, and we’d fail to secure the full safety, mobility and access benefits that autonomous vehicles could offer.”

He is backed by the Lt. Governor of of California, Gavin Newsom, who said,“We must guard against unreasonably holding back California from doing what it does best -- inventing the future."

There is also a vocal lobby against the commercial introduction of driverless vehicles. For example, one such opponent, Sam Pasupalak, the CEO of Maluuba, the Canada-headquartered natural-language processing company, spoke for many when he said "“While Google has clocked over a million miles of incident-free driving, they fail to mention that most of the time these cars aren’t driven in the scenarios a consumer would commonly face. It may be many years, perhaps over a decade, before we see a consumer version of a self-driving car that works in the scenarios that Google is proposing."

Perfectly true of course, but why should that stop continuing work on driverless cars and why should California seek to nip a nascent sector in the bud by applying rules and regulations that may well be redundant within months as the technology improves? After all, we all know that public policy and regulation always lags far behind innovation – just look at the development and uptakes mobile telephony and the Internet for glaring examples of that.

The global telephony industry also teaches us that probably the worst thing that might happen to the development and deployment of autonomous vehicles would be the emergence of checkerboard of regulation dotted across the individual States, resulting in a huge mish-mash of incompatible rules and a concomitant legislative nightmare. If ever there was a modern-day case for unified, nationally-applicable Federal regulatory regime, this is it, and it looks as though the Federal Government's transportation regulator, the National Highway Traffic Safety Administration (NHTSA) is already on the case, promising, as it is, to take a "nimble and flexible" approach to the issue.

Given the telemetry, control and computer technology embedded in today's 'smart' cars the biggest potential threat to any autonomous vehicle must be the risk of such systems being hacked and the control of a couple of tons of fast moving steel and flesh being hi-jacked by unknown crooks, kidnappers or terrorists. It is a nightmare scenario and, until automotive manufacturers can guarantee, unequivocally, that none of the systems in their vehicles can be re-programmed remotely, that is going to be the major stumbling block to the commonplace deployment of commercially-available driverless cars.

However, humans are ingenious and generally optimistic. Problems are there to be solved and although modern Luddites might rail against the continuing evolution of technologies, progress is unstoppable. Driverless cars will come and probably sooner rather than later. So, let's leave the last words today to George Gershwin. In 1937 he wrote:

They all laughed at Wilbur and his brother
When they said that man could fly
They told Marconi, wireless was a phony
It's the same old cry... now they're eating humble pie