What’s up with... Vodafone & CityFibre, Rakuten Mobile, 5G in Malaysia 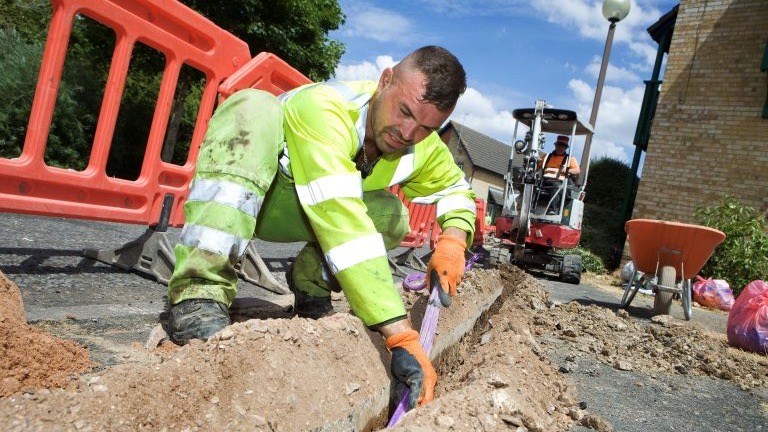 The ongoing fibre broadband battle in the UK and the financially painful road to nationwide network coverage in Japan for Rakuten Mobile are at the top of today’s pile of news.

Vodafone UK is ramping up its fibre broadband plans by expanding its relationship with CityFibre by becoming the alternative wholesale operator’s anchor tenant across its entire planned footprint of 8 million properties. Vodafone says the properties reached via the CityFibre relationship plus the households covered via its wholesale deal with BTs quasi-autonomous fixed access division Openreach make it the country’s largest fibre broadband service provider: By “Spring 2022” (which technically could mean any time up to mid-June), Vodafone says it will be able to offer FTTH services to 8 million UK homes. CityFibre’s current £4 billion rollout plan will see its fibre deployed in 285 cities, towns and villages by 2025. And in a bid to capture as many fibre broadband customers as possible (an important customer relationship hook), Vodafone UK is offering its 900 Mbit/s service for just £30 month to all homes reached via the CityFibre network. This looks very much like a strong competitive reaction to Virgin Media O2’s plans and aspirations, as well as offering an alternative to the EE/BT combination, and heralds a new era of converged service competition in the UK. Read more.

Rakuten Mobile continues to build out its 4G/5G network in Japan and add customers, but it’s also still losing eye-watering sums of money. In the third quarter it reported revenues of 54.9 billion Yen ($482 million) and an operating loss of 105.2 billion Yen (US$921 million). At the end of September the operator had 4.11 million mobile customers connected to its own network and almost 1 million MVNO customers (with service running over KDDI’s network). The company says it continues to build out its network and that “an improvement in earnings” is expected from the second quarter of next year.

Suppose they built a 5G network and nobody wanted to use it? In Malaysia, a government-established “Special Purpose Vehicle” (SPV) has the remit to oversee the deployment of 5G infrastructure across the entire country. This, the Digital Nasional Bhd (DNB), has now reluctantly admitted that no commercial mobile operator has yet agreed to use the government’s US$1.7 billion 5G network that has been designed and built by Ericsson. That’s nix, nada, none - and not at all what a very prescriptive government had expected. The plan was to have commercial 5G service up and running across three Malaysian states by the year end but it’s not going to happen because the service providers have “major concerns over transparency and pricing” where a “nationalised monopoly” is concerned. Admitting over-reaching itself, the DNB, with masterly understatement said that “the timeline for negotiations has been too optimistic”. The Prime Minister, Muhyiddin Yassin, has lost face in the debacle. He was vehemently opposed to granting spectrum allocations either to individual telcos or consortia of them and, understandably, the mobile operators took this to be evidence that RF provision would be via a government monopoly entity and thus inherently anti-competitive. The DNB claims spectrum pricing will be “non-discriminatory” and “the same for all MNOs.” Ahmad Taufek, the Chief Commercial Officer of the DNB, has it that the mobile operators will be charged “only as a form of cost recovery”. It seems the pricing model is based on coverage capacity, additional capacity, and “buffer” capacity. He says, “Bigger MNOs will have larger requirements and therefore prices will be affected.” By which, he means reduced. He also says, “Once we give the bigger MNO that price, the other MNOs can also request the same price. There is no such thing as a different price for each MNO”. Except, of course that there certainly will be. For their part, the service providers want Malaysia to follow “the global norm” and permit spectrum auctions, multiple roll-out contracts and the establishment of a second 5G network alongside the DNB’s. Indeed, several operators have already invested heavily in network upgrades to support 5G. They have the backing of the GSMA, which has warned that the emasculation of competition that will be the result of a single-vendor spectrum environment and system would be in direct contravention of the DNB’s stated aim of providing “better and cheaper 5G services” It’s a mess. The DNB will continue next year to persuade the MNOs to toe the government line but has no alternative plan in place if and, much more likely, when, they decline to do so - even as regional competitors including Singapore and Vietnam power ahead of Malaysia with realistic and flexible 5G plans.

Meanwhile, those wealthy optimists in India who have splurged on buying 5G handsets may well find the devices are obsolete before they have been used. India’s infamously slow-moving bureaucracy is to blame as the timetable for spectrum auctions falls further behind schedule and the federal government says one thing and then does another. The government has been making much of its intent to have commercial 5G services in operation in time for the 75th anniversary of India’s Independence which falls on August 15 next year. That promise looks increasingly unlikely to be kept unless something can be done to ginger-up the sub-continent’s space and defence interests that are jealously guarding their spectrum allocations and fighting tooth and nail not to have to share them with arriviste mobile telcos.

Germany’s Federal Ministry for Transport and Digital Infrastructure (BMVI) has started dishing out some of the €300 million it plans to pump into Open RAN developments in the country during the next few years as part of its aim to “expand and strengthen the competitiveness and innovative strength of the national and European telecommunications ecosystem.” The main chunk of its initial outlay, €17 million, goes to the open, collaborative i14y lab being set up by a consortium of companies and mainly hosted by Deutsche Telekom (see Euro telco giants unveil Open RAN labs in Germany and France). Separately, Deutsche Telekom is also getting €10.5 million of BMVI funding for its O-RAN Town pilot in Neubrandenburg, while Vodafone Deutschland is getting €1.5 million towards its ‘Protopolis’ trial in Plauen. And Nokia is being granted €2.5 million to help fund an Open RAN test centre in Ulm. Read more.

With some understandable fanfare, Nokia has announced that it is now the proud owner of 4,000 “patent families” that have been declared as essential to 5G. The company owns 20,000 patent families wherein each family comprises multiple individual patents. Having spent in excess of €130 billion on R&D since the year 2000, the company says many more patents will follow in due course. Pointing to its “three decades of driving cellular standardisation” Nokia stresses that “entire industries are powered by Nokia’s inventions in the field of cellular connectivity”. The company is also pleased that “several independent third-party studies have confirmed Nokia’s leadership in standard essential patents, including 5G, and this year Nokia became one of the first companies to achieve ISO 9001 certification for its high-quality patent portfolio management.” Nokia contributes its inventions to open standards in return for the right to license them on fair, reasonable and non-discriminatory (FRAND) terms. Companies can license and use these technologies without the need to make their own substantial investments in R&D. Jenni Lukander, President of Nokia Technologies, said: “We’re proud to have reached the milestone of 4,000 high quality patent families declared as essential to 5G but the work does not stop there. Our focus is on innovating for the future. Driving the development of the next generation of cellular standards and enabling entire industries to build upon our inventions.” So congratulations to Nokia, a company back on the front foot after the some very bad years recovering from the disastrous reign of CEO Stephen Elop, he of the infamous “burning platform” company memo and Microsoft-patented fireproof penny-loafers. The day Elop took over at Nokia, the company was worth €29.5 billion. Three years later, when Nokia’s phone assets were sold to Microsoft, it was worth €11 billion. In the ebook “Operation Elop”, written by Pekka Nykänen and Merina Salminen, technology journalists on the Finnish daily paper Kauppalehti, the former CEO is described thus: “By many measures Elop is one of the world’s worst - if not the worst - chief executives.”

Ofcom, the UK regulator, has ordered the incumbent national operator BT to keep open, operational and maintained 5,000 of the nation’s iconic telephone boxes sited in areas where mobile coverage is poor or non-existent and/or in accident (or suicide) blackspots. Over the past couple of decades many of the UK’s national network of 92,000 phone booths have been disconnected, decommissioned and, in many cases, removed. There are now just 21,000 left in situ. Of them, some have been left to rot and vandalism, often to the dismay of local communities although, on the plus side, local authorities have authorised some 6,000 to be put to other uses, such as coffee and snacks stalls, tourist information booths, defibrillator stations, mini-libraries and art galleries. Now Ofcom is further relaxing its regime to allow communities and organisations to buy a disused booth for the (very) nominal sum of £1 and put it to use for purposes other than telephony. Ofcom says the 5,000 “vital” boxes it has identified as being at risk will be protected. What’s more, BT will henceforth have to install batteries in some booths to ensure that can still be used in the event of a power cut. To give some indication of the continuing importance of the admittedly old-fashioned but very familiar and cherished British phone box, Ofcom figures show that 150,000 calls to emergency services were made from them last year, 25,000 calls were made to Childline, the counselling service for children and young people up to the age of 19, and 20,000 calls were made to The Samaritans, which provides support to anyone in emotional distress, struggling to cope or at risk of suicide throughout the UK.

To support the increasing demand for cloud services in India, Oracle and Bharti Airtel have expanded their relationship: Oracle is to expand its India West (Mumbai) region capacity with Nxtra by Airtel – the data centre subsidiary of Indian operator Bharti Airtel. The expanded Mumbai Region will complement Oracle’s existing cloud regions in Hyderabad and Mumbai. As part of the collaboration, Airtel Business and Oracle will also jointly market Oracle Cloud solutions to enterprise customers in the private and public sectors. Airtel Business serves more than 1 million enterprises in India, including large corporations, start-ups, governments and SMEs. Oracle Cloud solutions will now be available to these customers as part of Airtel Business’ integrated portfolio. Read more.