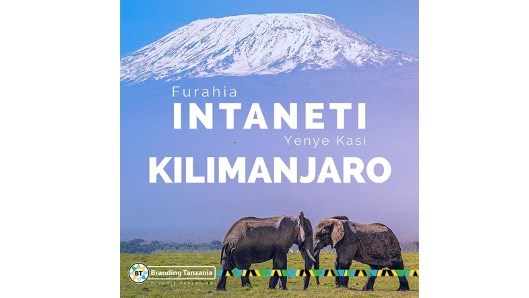 Social media climbers (geddit?) can now post pictures of themselves in situ (or take a hike) up Mount Kilimanjaro in Tanzania following the installation of internet access equipment on the slopes of Africa’s highest mountain – its peak is 5,895 metres (19,341ft) above sea level. The gear has been installed, at a cost of $6.3m according to Tanzania’s ICT minister Nape Nnauye, as part of a national broadband project, and has been deployed and will be managed by state-owned Tanzania Telecommunications Corp, according to a report from the now, perhaps, ironically named tour operator Tranquil Kilimanjaro. Nnauye tweeted about the launch of the service earlier this week. Connectivity is currently available only part way up the mountain, but there are plans to extend the network’s reach so that tourists can post Instagram stories from the peak and, less importantly (sarcasm alert), the 35,000 or so people that take to Kilimianjaro’s slopes each year have access to potentially life-saving communications services.

The market for radio access network (RAN) hardware and software technology declined in value during the second quarter of 2022, “recording the first year-over-year contraction in more than two years and the third consecutive quarter of RAN coming in below expectations,” noted research company Dell’Oro Group. But the companies selling RAN technology shouldn’t be too despondent after four good years, as Dell’Oro analyst Stefan Pongratz also noted that the impact of negative macroeconomic forces, such as inflation, and supply chain challenges have had only a limited impact on the market. “Slower momentum is not a sign that the 5G deployment phase is over. The message we have communicated for some time now, namely that the 5G cycle will be longer than previous technology cycles, still holds,” stated Pongratz in this press release. According to Dell’Oro, Nokia’s market share (excluding China) has been increasing this year, but Ericsson is still the top vendor outside China, commanding 39% of the market by value during the first half of the year.

From 1 September, Three UK will have a new chief network officer in Iain Milligan, the current director of service operations and assurance, who has been with the company since 2005. He will replace Carlo Melis, who is moving back to Italy to become CTO of Wind Tre which, like Three UK, is a subsidiary of industrial conglomerate CK Hutchison. According to Three, which is the number-four mobile player in the UK and has been linked with a potential acquisition by Vodafone, Milligan will be “responsible for continuing Three’s £2bn+ investment in its network, which includes a massive programme to upgrade the 4G network. In addition, he will oversee the switch-off of Three’s 3G network by the end of 2024, with resources redirected to both 4G and 5G.” Read more.

Many fans of the works of Charles Dickens agree that he could be a tad over-sentimental at times. One particularly saccharine novel is The Old Curiosity Shop, which was published in book form in 1841 after being serialised in Dickens’s very own magazine. It is the story of a feckless but doting grandfather, his granddaughter “little Nell” Trent, and the evil dwarf Daniel Quilp. [Spoiler alert...] They all die and, as Oscar Wilde later observed, “One would have to have a heart of stone to read about the death of little Nell without dissolving into tears… of laughter”. Very much the same can be said of the remarks made by Yu Xiekang, the vice chairman of the China Semiconductor Industry Association, in reference to the recent enactment of the US Chips and Science Act (see the final item in this news roundup from 15 August for coverage of the act). He complained, “parts of it clearly discriminate against China” and are designed "to give China's rivals a helping hand." Yup, that’s exactly what it is meant to do: Its purpose is to help semiconductor companies outside China to compete more effectively in the sector. “It [the Chips Act] contains essentially discriminatory clauses in market competition and creates an unfair playing field, which goes against the WTO’s [World Trade Organization’s] fair-trade principles,” continued Yu. He then added, taking phraseology straight from the People’s Daily, “We resolutely oppose US restrictive actions targeting certain countries” and said China is prepared to take “forceful measures to safeguard its legitimate rights”. The act prohibits US companies from exporting semiconductor fabrication technology to chip companies, such as Semiconductor Manufacturing International Corporation, Yangtze Memory Technologies and Tongfu Microelectronics, that are said to be funded by the Chinese state either via direct subsidies or more opaque means. Despite having thrown vast sums at its home-grown chips industry, China has had little success in developing leading-edge semiconductor technology of its own that can in any way replace, never mind improve on, the US circuitry on which it used to very much rely. The Biden administration has set aside a $52bn fund to help the US fab industry, which China is complaining about even though the People’s Republic of China has, itself, already spent $80bn of a planned $150bn on providing subsidies to bolster its own semiconductor industry by 2030.

The amalgamated entity that used to be the two separate companies of Virgin Media and O2, and which we all must now learn to call VM02, has given itself a clap on the back and issued an update of the connectivity upgrades achieved in Scotland. In brief, 5G is now “in” 58 towns and cities: “In” a place means that 5G services are available to, but not necessarily being used by, 50% of the population. Meanwhile, 4G coverage has been “boosted” in 37,000 postal code areas. VM02 says its network has grown by close to 33% over the course of the past year. 5G coverage is now available in Dundee, Edinburgh, Glasgow, Inverness and Perth, as well as Ayr, Barrhead, Inchinnan, Motherwell and Paisley, although whether the last five in the list can legitimately be described as ‘cities’ is debatable. For example, Inchinnan is a small village in Renfrewshire, while Paisley borders Glasgow. But let’s not split hairs. The 4G investments have expanded coverage in large urban areas, such as Edinburgh, Glasgow, Kirkcaldy, Inverness, Perth and Stirling, as well as some of Scotland’s remote areas, such as the Isle of Gigha (the most southerly and certainly one of the most beautiful islands of the Hebrides), Tarbert (on Loch Fyne), Portachoillan (in Argyll and Bute), Kennacraig (on the Kintyre Peninsula), and the island of Benbecula (in the Outer Hebrides). Also, polishing its green credentials, VMO2 has announced that, in ongoing efforts to minimise the impact of the rollout of optical fibre technology, it trialled the use of recycled aggregate while digging trenches across Glasgow. The experiment, which exploited sustainably sourced materials, proved successful and will “pave” the way for VMO2 to use more recycled materials in future. (See what I did there?)

The popularity of using digital payment technology is growing rapidly in the UK, according to statistics from UK Finance, a trade association for the UK banking and financial services sector that, although but a couple of months over five-years old, likes to style itself as “the collective voice for the banking and finance industry”. The association’s latest Payment Markets report, which covers payment trends during 2021, finds that 40.4 billion payments (using any method, consumer and business) were made last year, bringing transaction volumes back to the level last experienced in the halcyon days before the Covid-19 pandemic turned the world on its head. Card payments (debit and credit) accounted for 57% of all payments, with contactless methods of any type accounting for 32% of all payments, up from 19% in 2018. The October 2021 increase in the amount that can be made via a contactless terminal, from £45 to £100, made a much wider range of products and services available to be paid for by radio-frequency identification (RFID) technology and further boosted the popularity of contactless. Indeed, the average UK contactless transaction value rose by 30% after the £100 limit was introduced. According to the report, nearly a third (32%) of the UK adult population reported being registered for at least one mobile payments service in 2021, and of those registered for mobile payments, 92% used the services to make payments during the year. Where the business sector is concerned, 2021 saw 5.5 billion payments made, an increase of 14% over 2020, with enterprises re-opening as the pandemic waned. Businesses in general – and SMEs in particular – have also been adopting online banking and making greater use of Faster Payments electronic services. Meanwhile, individuals continued to bite the bullet and, despite continuing worries about the security and resilience of online services and the all-too-frequent hack attacks and service outages, went ahead and adopted mobile banking. At the end of last year, 57% of banked Brits were mobile bankers. Over the same period, the number of payments made in good old hard cash fell by 1.7% but, at 1.6 billion, cash remained the second most popular method of payment, accounting for 15% of all transactions made. Over the course of the year, the number of people who either gave up the use of cash almost completely or paid for things in cash no more than once a month rose from 13.7 million to 23.1 million. Now, though, as the UK is riven by the highest rate of inflation in more than 40 years, many people (and particularly the young in their first or second jobs) are turning back to cash as a much better way to manage their increasingly stretched finances. Many find that simply tapping a card to pay is too easy and seductive and can lead to expensive overdrafts or banks refusing to pay direct debits and standing order payments: Forecasts that the UK will soon become a cashless society are as nonsensical now as they were when they were first published.