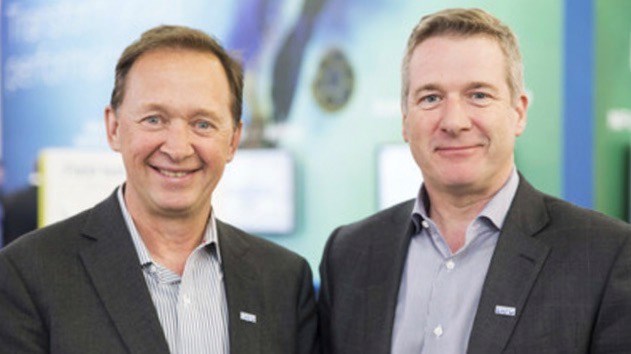 Some M&A wrangling in the test sector and some core deals at Vodafone for Ericsson lead the way in today’s industry roundup.

Germain Lamonde (pictured above left), the founder, Executive Chairman and controlling shareholder at Canadian test, assurance and analytics system vendor EXFO, has dismissed a $430 million takeover bid by Viavi Solutions, saying he would not consider “any transaction” with the test systems giant. Lamonde issued a statement to say he had already beaten away two previous takeover offers from Viavi, and has no intention to sell his shares to anyone. Lamonde earlier this month launched a bid to take EXFO private by offering $6.00 per share to buy out the company’s other stakeholders. In his statement Wednesday, Lamonde noted that “the business is well-managed, growing, strategically positioned for the evolving and dynamic future of the communications test and measurement industry… I believe wholeheartedly in the prospects of EXFO as a stand-alone company and I have no intention of changing the current operations of EXFO, including the location of its head office in Québec city.” The EXFO board has since issued this statement to note that the “unambiguous statement by the Controlling Shareholder that he rejects the Proposal led EXFO's Board of Directors to conclude that it will not pursue the [Viavi] Proposal as it is not capable of being completed.” See Viavi’s takeover offer here and Lamonde’s responding statement here.

Ericsson has confirmed its 5G core deals with Vodafone in the UK and Germany, where it will provide its entire cloud-native 5G Core Standalone for packet core applications. “With this new core delivery, the foundations are being built for our 5G Standalone network, which will enable us to work with customers to deliver innovations that would not be possible otherwise,” noted Andrea Dona, Chief Network Officer at Vodafone UK, where the deployment will span over five years. In Germany, Ericsson had previously announced its involvement in the early stages of Vodafone Germany’s 5G standalone network rollout, but that initial pilot innovation project has now developed into a full scale commercial agreement. Neither deal will be regarded as a huge shock, but these are important steps forward for Vodafone’s 5G service strategies in two of its most important markets. For the full details, see this press release.

South Korea's Ministry of Science, ICT and Future Planning has revoked its approval of "Conformity Assessments" on some 1,700 items of comms equipment after finding that the test records the assessments were based-on were fakes. Amongst the companies involved are Huawei of China and home-grown tech giant Samsung. The conformity assessments are a legal requirement ensuring that before equipment is sold, imported or exported it is in accordance with various regulations pertaining to RF effects on the human body and the working of other types of comms infrastructure. In a statement the Ministry announced that after an investigation it has cancelled certification of 1,678 pieces of equipment because the test records had been found to be falsified. All the equipment has been "withdrawn from distribution channels". In the case of Huawei, conformity assessments for 136 pieces of equipment were revoked after it was found that whilst test reports were provided indicating that they had come Bay Area Compliance Laboratories in the US, the gold standard global testing and compliance certification organisation, the fake reports actually originated in China. Meanwhile, Samsung had 23 fake certifications revoked.

American Big Tech companies face an increased and better-focused war of attrition against them with the news that 32-year-old Lina Khan has been appointed the chairperson of the powerful US Federal Trade Commission (FTC). Ms Khan was born in the UK and moved to the US as a child. For more than a decade she has been a persistent and outspoken critic of Big Tech and their anti-competitive tendencies. She has long argued that the Big Tech companies have grown so big they are utterly dominate their markets, stifle competition, drive rivals out of business, exploit consumers, fail to pay enough tax and wriggle and lobby constantly to dilute and even prevent meaningful regulatory oversight. She also favours the break-up of the likes of Facebook and Google and as head of the FTC will now have the clout to make some serious changes. Big Tech will be worried, especially given that the agency is already taking court action against Facebook on the grounds of the illegal maintenance of its "personal social networking monopoly through a years-long course of anticompetitive conduct". As they say in journalism, "This one will run and run". Lawyers are digging-in for years trench warfare and happy in expectation of a long succession of big, fat paydays.

In the UK, ‘Gigatag’ (the Gigabit Take-up Advisory Group) has told the government that it should provide low-income families with special "money-off" vouchers to reduce the cost of the installation of gigabit broadband. In a new report, Gigatag – sanctioned by the state authorities and set up under the aegis of the influential consumer watchdog organisation "Which", the Federation of Small Businesses and the Confederation of British Industry – warns that the government's already reduced ambition to have "gigabit-capable" broadband deployed to 85 per cent of Britain's population by 2025 will not happen if households cannot afford to upgrade their Internet access services. A Gigatag survey shows that just 20 per cent of the population would be willing to pay more for faster broadband. There is also considerable confusion amongst consumers as to the cost/benefit balance of signing up for more expensive broadband. Matt Warman MP, the Minister for Digital Infrastructure, says he will "consider the suggestions", which probably means the can will be booted down the road and into the long grass for someone else to dig out and retrieve at some distant date. Another Gigatag suggestion is that the industry regulator Ofcom should introduce a "gigabit-ready" label to be slapped on hither and yon to help "raise awareness" of upgraded (and more costly) services.