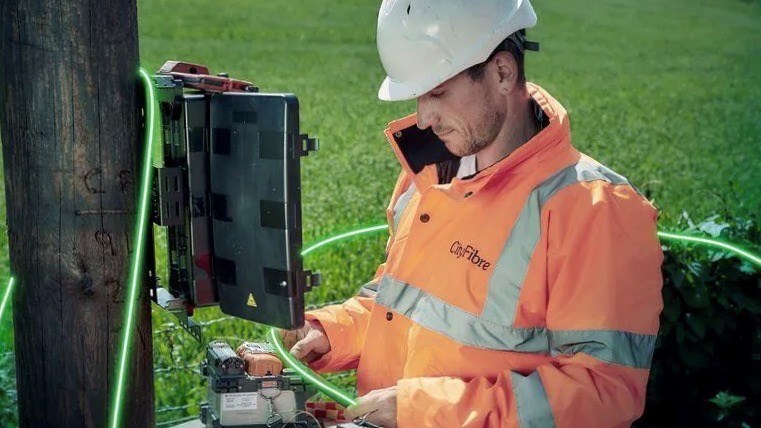 Seemingly untroubled by the bullish nature of BT’s semi-autonomous fixed-access network unit Openreach and the emergence of multiple competitive network builders, UK wholesale fibre-access network operator CityFibre has secured £4.9bn in debt financing to help fund its ambitious rollout programme. The debt facilities secured from multiple banks means CityFibre’s plan to pass 8 million homes, 800,000 businesses, 400,000 public sector sites and 250,000 5G access points across the UK with its fibre lines is now fully funded. Earlier this year, the operator announced an equity investment from Mubadala Investment Company. “Over the last decade, we’ve built a business that has transformed the UK’s digital connectivity landscape for the better. With our rollout now fully financed, backed by so many esteemed financial institutions, we have emerged as a strong national challenger,” noted Greg Mesch, CEO of CityFibre. “But CityFibre’s aim is not simply to challenge. It’s to be better. It’s to establish ourselves as the preferred network wherever we build, bringing higher-quality, more affordable infrastructure within reach of millions and unleashing the transformative economic potential of Full Fibre to help level up the UK. We have never been more confident that we will succeed,” he added. Read more.

In the latest twist to what could be an exhausting saga, Elon Musk, currently the richest person in the world, has officially warned Twitter that he might cancel his $44 billion offer to acquire the social networking platform, first unveiled in April. “Mr. Musk believes Twitter is transparently refusing to comply with its obligations under the merger agreement, which is causing further suspicion that the company is withholding the requested data due to concern for what Mr. Musk’s own analysis of that data will uncover,” reads a letter to the company sent by Mike Ringler, a lawyer representing Musk. The information Musk is demanding before he commits further to an acquisition covers data about spam and fake accounts on Twitter. While at the start of May Twitter disclosed that an estimated average of “false or spam accounts” during the first quarter of this year was fewer than 5% of its monetisable daily active users (mDAU), the billionaire’s legal team “does not understand the company’s reluctance to allow Mr. Musk to independently evaluate those estimates,” the letter states. The information is deemed by the entrepreneur as “necessary” so that he has a “complete and accurate understanding of the very core of Twitter’s business model — its active user base” so that a deal can be closed. You can read more in the filing to the US Securities and Exchange Commission here.

eSIM specialist Truphone is reportedly being sold for the princely sum of just £1 after its main investors, including Russian oligarch Roman Abramovich, were forced to offload the company, according to the Financial Times. Truphone noted in early April that it was exploring its ownership opportunities.

Here's a forecast that won’t shock you... According to Juniper Research, the value of enterprise cybersecurity investments will exceed $226bn in 2027, up from $179bn in 2022, a rise of 26% over the next five years. The company has also identified its five leading cybersecurity vendors, namely Amazon Web Services (AWS), IBM, Cisco, Oracle and Sophos. “Cloud computing has been transformative for businesses, so it is no surprise that two of the biggest cloud computing vendors, AWS and IBM, also lead in the cybersecurity space,” noted Damla Sat, research co-author of Juniper Research’s new report, Cybersecurity: Key Trends, Competitor Leaderboard and Market Forecasts 2022-2027. “For cloud vendors, effective cybersecurity is a basic requirement – by offering in-house cybersecurity solutions, AWS and IBM are capitalising on their existing large user bases; acquiring businesses and capabilities as needed to enhance their product offerings.” For further details, see this announcement.

T-Mobile US has launched commercial Voice Over 5G (VoNR) services in limited areas of Portland, Oregon, and Salt Lake City claiming “another technology milestone with its industry-leading nationwide Standalone (SA) 5G network”. With VoNR “the un-carrier can keep devices always connected to 5G and enable future transformative applications that require a seamless 5G connection,” the company added, noting that it plans to continue its VoNR rollout to “many additional areas” this year. “We don’t just have the leading 5G network in the country, T-Mobile is setting the pace for providers around the globe as we push the industry forward – now starting to roll out another critical service over 5G,” said Neville Ray, president of technology at T-Mobile US. The operator cited Ericsson, Nokia, Samsung and Qualcomm Technologies as the technology partners helping to enable the rollout of VoNR services. Read more.

The global smartphone market is set to shrink by 3.5% to 1.31 billion units this year because of reduced demand and ongoing problems in the sector’s supply chain, according to IDC. "The smartphone industry is facing increasing headwinds from many fronts – weakening demand, inflation, continued geo-political tensions, and ongoing supply chain constraints. However, the impact of the China lockdowns, which have no clear end in sight, are far greater," said Nabila Popal, research director with IDC's Worldwide Mobility and Consumer Device Trackers. Read more.

Orange is to build two datacentres in France that are designed to help the operator meet its environmental goals. Along with an existing facility, the datacentres will operate without the use of air conditioning by using a free cooling system. “The outside air and the design of the buildings provide natural cooling for IT equipment, thereby reducing their energy impact by 30% compared to the older generation of Orange datacentres,” the telco noted in this announcement.

Ciena is continuing to benefit from robust demand for data transport technology, especially in North America. It reported fiscal second quarter revenues of $949.2m, up 13.8% year on year, with non-telco customers accounting for an impressive 44% of sales (including 22% of revenues from webscale customers and 9% from cable operators). But its margins are being squeezed by higher costs and it is struggling to meet demand: It now has a backlog of orders worth more than $4bn, which is a nice problem to have if it can hang on to that business. For more on its financials, see this press release.