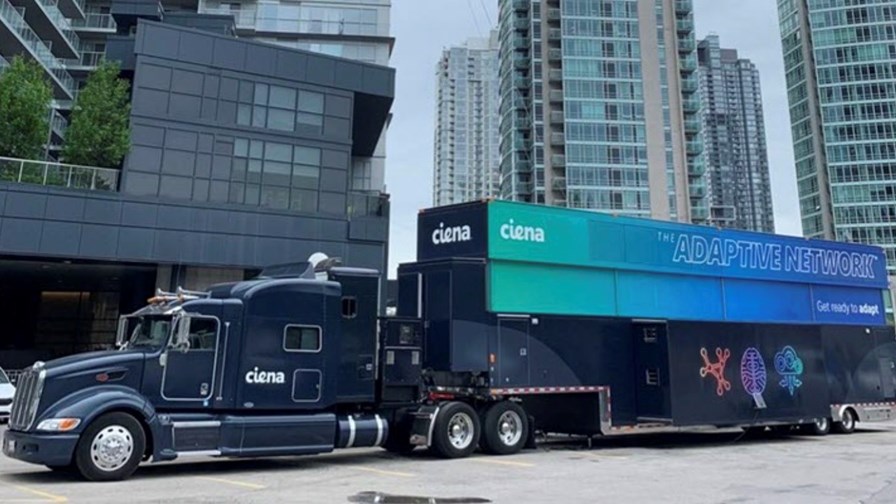 A great end to the year for Ciena, a thumbs up for Openreach progress from UK regulator Ofcom and some interesting private 5G stats from NTT are at the front of today’s news grid.

Ciena has reported a stellar fiscal fourth quarter, with revenues up by 25.7% year-on-year to $1.04 billion, while earnings also improved significantly. “Our strong financial results exceeded our expectations in the fourth quarter and for the full fiscal year, driven by continued execution of our strategy and our demonstrated ability to manage supply chain challenges,” boasted Gary Smith, Ciena’s long-time President and CEO. It wasn’t only the vendor’s sales that went up – it’s share price rocketed by 12.4% to $69.93 in Thursday morning trading in New York. Read more.

UK regulator Ofcom has given BT’s quasi-independent access network division Openreach a ‘pass’ in its latest monitoring report, stating that Openreach “continues to operate in a way that is strategically independent from BT, as envisioned by the Commitments. Strong structures and processes are now well-embedded across both organisations to support compliance, or address any issues that may arise.” That statement, though, is likely to stick in the craw of the UK’s altnets, particularly CityFibre, the wholesale access challenger that has proven to be a sharper thorn in BT’s side than it had envisaged, and which has just officially challenged the approval in late September by Ofcom of Openreach’s Equinox wholesale offer, which ties ISPs into long-term contracts at reduced prices that some claim are anti-competitive. In Ofcom’s statement, it notes that it is expanding its monitoring of Openreach as “some issues have already been highlighted to us. We encourage Openreach to engage with its customers on these areas of concern, and work collaboratively to overcome them.” That will have given the Openreach management cause for a wry smile, and its rivals recourse to smash a few coffee mugs... You can read the Ofcom statement here.

A somewhat self-serving yet still interesting report from Japanese operator giant NTT suggests that a vast majority of corporate decision-makers from some select markets expect to deploy a private 5G network in the coming years. According to a survey (commissioned by the operator and undertaken by Economist Impact) of 216 CIOs and other business leaders at companies in the UK, US, Germany, and Japan – markets where either licensed or unlicensed spectrum has been made available for corporate network needs – nearly one quarter (24%) of respondents are piloting private 5G networks already, while more than half of the companies surveyed plan to implement a private 5G network within the coming 6-to-24 months. The results show that 83% of respondents rate improved data privacy and security as a very important outcome they expect to achieve with the implementation of private 5G networks; one third (33%) rate it as business critical. All of this will seem like good news for NTT, which launched a Private 4G/5G Network-as-a Service platform in August. So if the CIOs had dumped on the idea of private 5G, we’re sure you would likely have never heard about the survey’s results... Read more.

Private 5G was one of the topics covered during the first day of the Great Telco Debate: You can catch up with the on-demand version of the live show right here (registration is required, but it’s quick, easy and free!).

Only days after his departure from the Facebook-backed Telecom Infra Project (TIP), Attilio Zani has turned up as the Telecom Industry Lead (Professional Services Organization) at Google. What a time to be having such a job! We send our congratulations to Attilio and, of course, urge him (and everyone else, of course) to participate in our Great Telco Debate session on Friday that will be very close to Zani’s heart and bonus package... Telcos and the Hyperscalers. To submit questions to the session’s ‘expert witnesses’ during the live show at 17:00 UK / 18:00 CEST / 12:00 EST just register here (it’s quick, easy and free), cook up some juicy questions and voite for or against our debate motion, ‘The hyperscalers represent an accelerated channel to the digital market for the CSPs.’

Well, that didn’t last long. A couple of weeks ago it was all bipartisan backslapping and brotherly love in the US Senate with Democrats and Republicans co-operating to frame new legislation that would require the owners and operators of “critical infrastructure” to report cybersecurity breaches and ransomware attacks to the Department of Homeland Security’s Cybersecurity and Infrastructure Agency within 72 hours of a breach being detected or an extortion demand being received. What’s more, those paying ransoms would have to alert the feds within 24 hours. That’s now gone by the board. The so-called “compromise version” of the 2022 National Defense Authorization Act is without the above provisions. The legislative stopwatch ran down to zero as petty party-political divisions combined with the easily-bruised egos of individual Republican senators. The result was the abandonment of clauses that would have required recording of the frequency of ransomware incidents, their severity and the range of payments demanded and paid that were designed to help agencies such as the FBI to track and trace digital extortionists. The main reason being that the reporting of incidents would place “another onerous government mandate on businesses.” After all it could take an hour to fill in the forms. Gary Peters, a Michigan Democrat, commented, “I am disappointed Senate Republican leaders blocked these common sense provisions that have broad bipartisan support - including from the bipartisan leaders of the Senate Homeland Security and Intelligence Committees. Cyber-attacks, including ransomware attacks, are one of the greatest threats to our national and economic security. We need urgent action to tackle the serious threat posed by cyber-attacks, and by blocking our bipartisan reforms, Senate Republican leaders are putting our national security at risk.”

Into Africa. Meg Whitman, the sometime CEO of Hewlett-Packard and eBay, has been nominated by President Biden to be the next US Ambassador to Kenya. She was also the CEO of Quibi. Do you remember Quibi? Not many do. It was a short-form video platform that lasted barely longer than one of its short-form videos. Known to be personally worth at least US$5 billion, Whitman is the latest on America’s Rich List (where she sits at Number 151) to be nominated (and appointed) to prestigious placements under the Biden administration. In 2010 she was the Republican nominee for governorship of California and spent $144 million on her campaign but lost out (by a wide margin) to Jerry Brown. She also backed Mitt Romney in the 2012 presidential campaign but baulked at supporting Donald Trump in 2016 and 2020. Calling him “a dishonest demagogue” she changed allegiance to the Democrats and backed Hilary Clinton and then Joe Biden, donating $508,400 to his campaign. The US and Kenya began negotiations on a trade pact under the Trump administration and talks have continued under Biden. They enjoy strong bi-lateral support in the US Congress. According to ivypanda.com (a “student success hub designed to improve the educational outcomes and learning capabilities of students around the world”), Meg Whitman “utilizes intellectual stimulation as a tool to encourage her followers to be creative in the course their executive duties.” As HP found out.

With relations between the US and China being about as warm as a dead walrus in a fridge in pre-climate-change Antarctica, some Chinese companies have hedged their bets and have listed on both the New York and Hong Kong stock exchanges. As a strategy, it hasn’t necessarily been a winner. Take the Chinese microblogging website, Weibo, for example, the second biggest social media platforms in the PRC with close to 600 million users per month. As China’s economy begins to slow and inflation rises, Weibo’s debut on the Hong Kong Stock Exchange yesterday was a flop as the stock fell by 7.2 per cent. Meanwhile, and simultaneously, Alibaba lost 4.7 per cent and Baidu fell by 2 per cent. Big Chinese technology companies that are listed in Hong Kong have been hammered with US$606 billion in market value lost since the beginning of June this year as Beijing cracked-down on companies perceived to be getting too big for their capitalist running-dog boots and slipping from state-control. Weibo’s fall in Hong Kong, while salutary, paled into comparative insignificance compared to its fortunes in the US where the company’s stock price has collapsed by 35 per cent. It is now even possible that Weibo will eventually delist from the US and feature only on the Hong Kong exchange. After all, Didi, China’s Uber, has already announced it will delist in New York. Any such move by Weibo would be a big gamble. As Nina Xiang, the MD of China Money Network in Hong Kong commented, "It will be disastrous if all Chinese companies are forced to delist from US exchanges. Despite the intense competition between the two countries, they need, must, and have to be interdependent financially, economically, technologically, socially, and culturally.” In Beijing, the grey men of the Politburo think differently.

The UK ISP, TalkTalk, has announced that Internet usage by people of pensionable age has soared by 69 per cent since Covid-19 headed its ugly rear. Unsurprisingly, given the string of lockdowns and instructions to shelter in place, senior citizens have turned in their droves to streaming TV and movie content and also to online gaming. TalkTalk’s “Internet Insights” compares web usage from July to November this year against the same period in 2019 and indicates that the pandemic has resulted in very significant changes in how “older demographics” use the Internet. The ISP predicts that peak broadband data usage will more than double by 2025 as users upgrade their TVs and games consoles for higher quality, data-heavy streaming. The use of online streaming services, such as Netflix and Amazon Prime, are on the rise among the over 65s with 41 per cent now streaming more content than they did before the pandemic. What’s more, 32 per cent now use online services for their personal banking requirements and for dealing with utility companies while 61 per cent now routinely shop online. Indeed, 67 per cent regard fast, reliable and affordable broadband to be crucial to their day-to-day lives and 20 per cent are planning to upgrade to a faster Internet and TV package in 2022.

Colt has teamed up with CityFibre to extend the reach of its UK metro network in eight regional cities across the UK; Leeds, Bristol, Slough, Bracknell, Reading, Milton Keynes, Edinburgh and Glasgow. Read more.

Broadcom is to acquire Boston, Mass.-based AppNeta, which has developed a “SaaS-based network performance monitoring solution for the distributed enterprise, providing IT teams with precise, end-to-end visibility into network performance from the end user's point of view, independent of what network they use to access applications,” according to the chip giant. “With AppNeta's SaaS-based solution, IT and Network Ops teams at large, distributed enterprises can quickly pinpoint issues that affect network and business-critical cloud application performance, regardless of where they occur,” it claims. Financial terms were not disclosed. Read more.