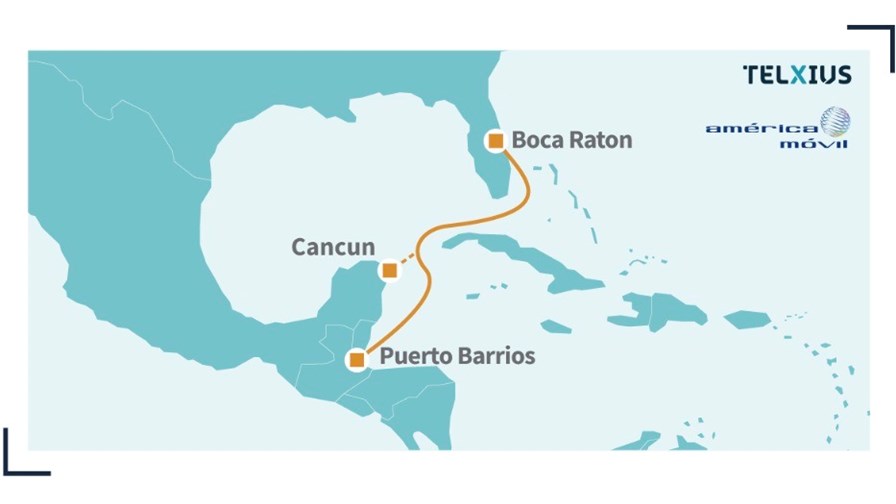 In today’s industry news roundup: América Móvil and Telxius team up on new subsea cable to link Central America and the US: Telia continues to slim down its workforce; global fixed broadband subs growth still driven mainly by China; and more!

Latin American telco giant América Móvil and Telxius, the international networks business that is majority owned by Telefónica, are collaborating on the construction of a new subsea cable that will run from Guatemala to the US. “Named AMX3 by América Móvil and Tikal by Telxius, this subsea cable will be the highest-capacity undersea cable to connect Puerto Barrios (Guatemala) with Boca Raton (US), with an additional possible landing in Cancun (Mexico),” noted Telxius in this announcement. The network, which is being constructed by Alcatel Submarine Networks (a unit of Nokia), will have an estimated capacity of 190Tbit/s. The move is part of América Móvil’s ongoing strategy to build the “most extensive subsea network in the Americas”. It already operates the 18,300km AMX-1 cable that connects the US to Central and South America with 13 landing points, and the 7,300km South Pacific Submarine Cable, which runs along the Latin American Pacific coast, connecting Guatemala, Ecuador, Peru and Chile with five landing points.

Days ahead of the release of its 2022 financials, Nordic telecom operator Telia has entered into talks with unions about hundreds of job cuts across Sweden, Finland and Norway, Reuters has reported. The move is part of a cost-cutting plan that was first announced in 2021. Reuters noted that Telia, which has about 20,000 staff across its multiple operations, has been reducing its headcount by about 1,000 positions each year since 2021, so the latest move looks like the start of this year’s slimming-down process. Telia will unveil its full-year financial results on 26 January.

The number of fixed broadband service subscribers worldwide grew by almost 24.6 million, or 1.87% sequentially, during the third quarter of 2022 to end last September at just more than 1.34 billion, according to the latest statistics gathered by broadband research firm Point Topic. China accounted for almost 15 million of the additions during the third quarter, followed by Brazil with 1.4 million. During the first nine months of 2022, the number of fixed broadband service subscribers worldwide grew by just over 65 million. As you’d expect, China is by far the largest fixed broadband market by subscriber numbers, with more than 550 million. The next largest nation is the US with about 120 million, followed by Japan, Brazil and Germany, each of which has fewer than 50 million. For more insights, check out the latest Point Topic report.

Global semiconductor sector revenue grew by just 1.1% year on year in 2022, as the market was affected by macroeconomic challenges and reduced spending, according to preliminary data from Gartner. Revenue last year amounted to $601.7bn compared to $595bn in 2021. At the start of 2022, OEMs “started hedging themselves from shortages by stockpiling chip inventory,” explained Andrew Norwood, VP analyst at Gartner. However, by the second half of the year, many global supply chains were affected due to a slowdown of the global economy caused by high inflation, rising interest rates, higher energy costs and continued Covid-19 lockdowns in China. Samsung Electronics kept its position as the top semiconductor vendor with a market share of 10.9%, but saw its revenue declining by 10.4% year on year, mainly due to drops in memory and NAND flash sales. Intel maintained its second position with a 9.7% market share, followed by SK Hynix (6%). Qualcomm and Micron Technology switched places: The former ranked fourth with a 5.8% market share, leaving Micron in fifth place with a 4.6% market share.

Mavenir is looking to land a slice of the growing fixed wireless access network equipment sector with the launch of its own fixed wireless network (FWA) system package, which comprises its open virtualised RAN software, its converged packet core platform and its OpenBeam radio units. “This offering provides a competitive solution in a low-footprint deployment that leverages public and private cloud infrastructure,” claimed the vendor. FWA is gaining traction: There has been significant uptake in the US in the past year, with both T-Mobile and Verizon using their 5G infrastructure to offer home broadband services and sign up hundreds of thousands of customers, while a recent forecast from ABI Research suggested the number of 5G FWA subscriptions worldwide might reach 58 million by 2026. Read more.

The global market for mobile core and multi-access edge computing (MEC) platforms is set to grow at a 2% compound annual growth rate (CAGR) between 2022 and 2027, by which time the market will be worth more than $50bn per year, according to a new forecast from the Dell’Oro Group.

Vodafone has been given the green light to sell its majority stake of 70% in Vodafone Ghana to Africa-focused telecommunications service provider Telecel Group, chaired by French entrepreneur Hugues Mulliez. In a statement, Ghana’s National Communications Authority (NCA) announced it has granted approval for the sale after receiving a revised financial and technical proposal by Telecel Group that “demonstrated the needed capital investment to extend the deployment of 4G and launch innovative fintech solutions” in the country. The authority previously rejected a sale application by Vodafone Ghana in January 2022 over its inability to meet “the regulatory threshold for approval to be granted,” it said. Telecel Group reportedly entered into negotiations with the government in August 2022 to pursue the necessary regulatory blessing.

Could mobile-connected laptops yet become a big deal? Samsung hopes so. It has just started promoting its Galaxy Book2 Go 5G, which promises a “best-in-class mobile experience with 5G capabilities and enhanced performance powered by Snapdragon 7c+ Gen 3”.